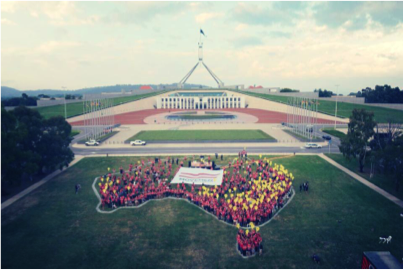 Our monthly round-up of Australian aid and development news.

The Movement to End Poverty

On 14 March nearly 1000 young Australians gathered as a part of the 2013 Oaktree Roadtrip to end poverty (which Jonathan Pryke took part in) on the front lawns of Parliament House to launch the Movement to End Poverty, a sector-wide campaign that will run up until the federal election in September. The Movement to End Poverty is a joint petition of the Make Poverty History and Micah Challenge coalitions.

The campaign asks that the Government and opposition commit to increasing the foreign aid budget to 0.7% of Gross National Income by 2020 and to reach 0.5% by 2016-17. The Campaign aims to collect 500,000 signatures before the election. In its first week it has collected over 45,000.

UNICEF Australia has also launched its own campaign advocating for the continued increase of the Australian aid budget: the Promise Me campaign.

Meanwhile, former finance minister Nick Minchin wrote to the editor of The Australian, on March 7, describing projected growth in the aid budget to 2016-17 as “staggering, irresponsible and unaffordable” and calling for aid volume to be frozen in real terms, at least until the budget returns to surplus.

AusAID has released the Independent Progress Review of the $100m Provincial Road Management Facility (PRMF) in the Philippines. The program, which up until September 2012 was delivered by Coffey International, funds the upgrading of roads in 10 poor provinces of the Philippines. The July 2012 report states that progress “has not been commensurate with the time and funding utilized.” By the end of 2011, the project has spent about $75 million of its $100 million budget, but had only rehabilitated and maintained about  70 kms of the project’s 1000 km target. The report points the finger at “high transaction costs,” “prolonged decision-making processes,” and “AusAID’s aversion to risk.” The management response [pdf] acknowledges the “chronic underperformance issues” and promises major change.

An Independent Progress Review of the Australia Indonesia Partnership for Justice, a five-year $50 million program initiated in June 2011 with the objective of “increased access to better quality legal information services” for people in Indonesia. The review, completed in November 2012, finds that the project will not benefit the poor, and that its first objective (“Improved judicial resolution systems for marginalized groups”) is unlikely to be achieved. AusAID has agreed [pdf] with the report’s analysis and recommendations.

Similar criticisms were made more broadly of Australian aid in the Office of Development Effectiveness law and justice review (released earlier this year, but conducted in 2011). Whereas the management response to that review stressed the progress already made to implement ODE’s recommendation of doing more to support marginalized groups, the management response to the Indonesia review accepts that the Partnership for Justice program has to be reoriented “to be less focussed on high-level institutional reform and more directly beneficial for the end user justice seeker.”

These two reviews (on Indonesia and Philippines) are the only ones released onto the AusAID website in the last month. From now on, the Aid Buzz will provide summaries of all aid evaluations. We know there are lots of good ones, and look forward to reporting on them soon.

A new paper in The Lancet from the ANU’s Professor Sharon Friel and La Trobe’s Dr Deborah Gleeson criticize the Trans Pacific Partnership Agreement, the free-trade agreement which Australia is currently negotiating with the US and other countries. They argue that the strict intellectual property rules which free trade agreements with the US embody reduce “access to affordable drugs in low-income and middle-income countries.” However, they note that “The TPP countries seem to be rejecting many of the US proposals related to drugs, which has slowed the negotiations, with discussion of drugs postponed until later rounds.” They also note that the TPP will hinder the ability of governments to regulate on public health grounds, as such attempts may fall foul of protections provided to investors. So far, Australia is apparently alone is resisting the Investor State Dispute Settlement (ISDS) section of the TPPA. The link between trade agreements and global health will be discussed in detail at an upcoming symposium at the ANU in May.

Australian aid to support governance reform in Myanmar, or will it?

After meeting with Myanmar President Thein Sein on March 18th in Canberra, Prime Minister Gillard made several significant announcements in support of Myanmar and its people, including an additional $20 million in funding over two years for the first phase of the new Myanmar-Australia Partnership for Reform. The partnership (details yet to be released) will support the Myanmar Government to deliver its reform agenda through “strengthening democratic institutions, promoting human rights, improving economic governance and advancing the rule of law.” It will be interesting to see how this additional funding aligns with AusAID’s recently-released country strategy [pdf] for the country, which said, perhaps surprisingly, “Australia will not have a large program focused on strengthening governance in Myanmar”.

News Limited’s Steve Lewis is again turning his attention to the aid program. He has recently published pieces criticising it for reliance on a small number of big Australian contractors to deliver projects, for not applying a “buy Australian” policy when procuring companies and individuals to manage projects or provide advice, and for “wasting” hundreds of millions of dollars on “useless” climate change programs. The latter piece also pursues Lewis’s  long-standing fascination with fraud in the aid program, focusing in this case on problems with the scholarships program in Afghanistan. It’s notable that Lewis quotes AID/WATCH opposing “boomerang aid” in the first piece, while he appears quite keen on boomerang aid in the second.

Opposition criticizes use of aid to fund asylum seeker costs

On March 8, International Womens Day, Shadow Parliamentary Secretary for Foreign Aid, Teresa Gambaro, took aim at “[t]he Gillard Government’s hijacking of $375 million from the foreign aid budget” to fund costs associated with asylum seekers.  She argued that this would “severely undermine Australia’s ability to assist our near neighbours tackle the unholy trinity of domestic violence, and infant and maternal mortality” and in particular put in jeopardy the Gillard Governments new Pacific Women Shaping Pacific Development initiative.

Our monthly update on what’s new in the content and appearance of AusAID’s website. Last year we provided some suggestions for AusAID’s transparency initiatives, and to our delight some of them have been implemented. However, the search function and ‘sort by date/title’ features are still experiencing major bugs, making searching for publications, at times, even more difficult than before. AusAID should also provide a list of all publications by date, not simply providing the 6 ‘latest publications’.

There have been no new thematic strategies released this month. Of the 20 ‘aid issues’ (excluding the MDG ‘issue’), otherwise known as themes, the only noticeable gap (in terms of relative funding size) that remains is a thematic strategy for environment and climate change.

Foreign Minister Carr has announced up to $24 million over five years to put an end to violence against women in Cambodia.

Foreign Minister Bob Carr and his opposition counterpart Julie Bishop attended a Global Poverty Project event in support of polio eradication on the lawns of Parliament House on March 12. Both expressed commitment to the eradication effort.

Applications are now open for Australia Awards Scholarships for 2014. There will be around 2,300 scholarships awarded.

Applications are now open for Government Partnerships for Development (GPFD) grants. GPFD is an AusAID initiative that supports Australian public sector organisations—Commonwealth, state and territory government agencies and public universities –  to work with their counterparts in Australian ODA-recipient partner countries. Funding of between $1-4 million is available per application.

Parliamentary Secretary for Pacific Island Affairs Richard Marles launched the new Action Plan for the Western Pacific Diabetes Declaration 2012–2015 (WPDD) this month. The Action Plan is the third [pdf] such effort made to coordinate the actions of Pacific island governments and combat the rise in diabetes.