The focus on aid and development, Australia’s relations with Pacific and foreign policy in the 2022 election campaign has been unprecedented. Here we take a look at what the major parties  – Coalition, Labor and the Greens – have promised on aid policy and the budget.

The Australian Greens’ spokespersons on Foreign Affairs, Senator Janet Rice, and International Development and Aid, Senator Mehreen Faruqi, joined us for the first forum on 4 May. Watch the video and read the Senators’ blog.

The ALP’s Shadow Minister for International and the Pacific, Pat Conroy, spoke on 9 May. Watch the video, read the speech and read Mr Conroy’s blog.

The Coalition’s Minister for International Development and the Pacific, Senator Zed Seselja, joined us for the final forum on 13 May. Watch the video, read the blog and read Senator Seselja’s speech.

Following is our summary of the policy and funding commitments of each party.

The Coalition did not make any new aid policy commitments during the campaign, focusing instead on its record in supporting the region through the COVID-19 crisis.

In his speech, Senator Seselja highlighted the “over $1 billion in additional Official Development Assistance (ODA)” delivered to the region since 2020 through the Government’s “temporary and targeted” aid measures. In doing so, he noted the achievements in areas such as regional vaccination coverage, enhanced social protection in the Pacific and improved maternal and child health. He also emphasised the responsiveness of the Government’s wider support through Pacific labour mobility reforms, budget support loans for Papua New Guinea and Indonesia, and defence assistance.

Significantly, Senator Seselja also flagged that a Coalition Government would revisit the 2020 interim aid strategy, Partnerships for Recovery, should the Coalition be re-elected. He stated that “as Australia’s geostrategic environment continues to shift, it will be appropriate for a new government to lay out a new approach” and that, in doing so, “we’ll look to more fully integrate the development objectives of our ODA and non-ODA funding”.

On labour mobility, Senator Seselja also signalled that the Coalition was open to permanent migration pathways for Pacific workers and greater integration in areas such as education and training. Devpol has published a separate campaign wrap on labour mobility.

The Coalition did not make any new aid funding commitments during the election campaign.

The Coalition Government did announce additional “temporary and targeted” aid for the Pacific, Ukraine humanitarian relief and global health in the March Budget, as well as a doubling of non-ODA loan funding available through the Australian Infrastructure Financing Facility for the Pacific. This increase has postponed future aid cuts to 2023-24.

The Labor Party made several specific aid-related commitments in the lead up to and during the course of the campaign. These include:

Labor has included additional aid commitments worth $1.052 billion over the forward estimates (to 2025-26) in its final pre-election costings. This is comprised of:

Based on these commitments, we have recalculated our previous comparisons between Labor’s 2022 election funding announcements and the amounts needed to stabilise aid as a percentage of ODA/GNI, increase aid with inflation, increase aid by 0.01% ODA/GNI each year (as per 2021 Labor’s National Platform) and reach 0.3% ODA/GNI by 2027-28. 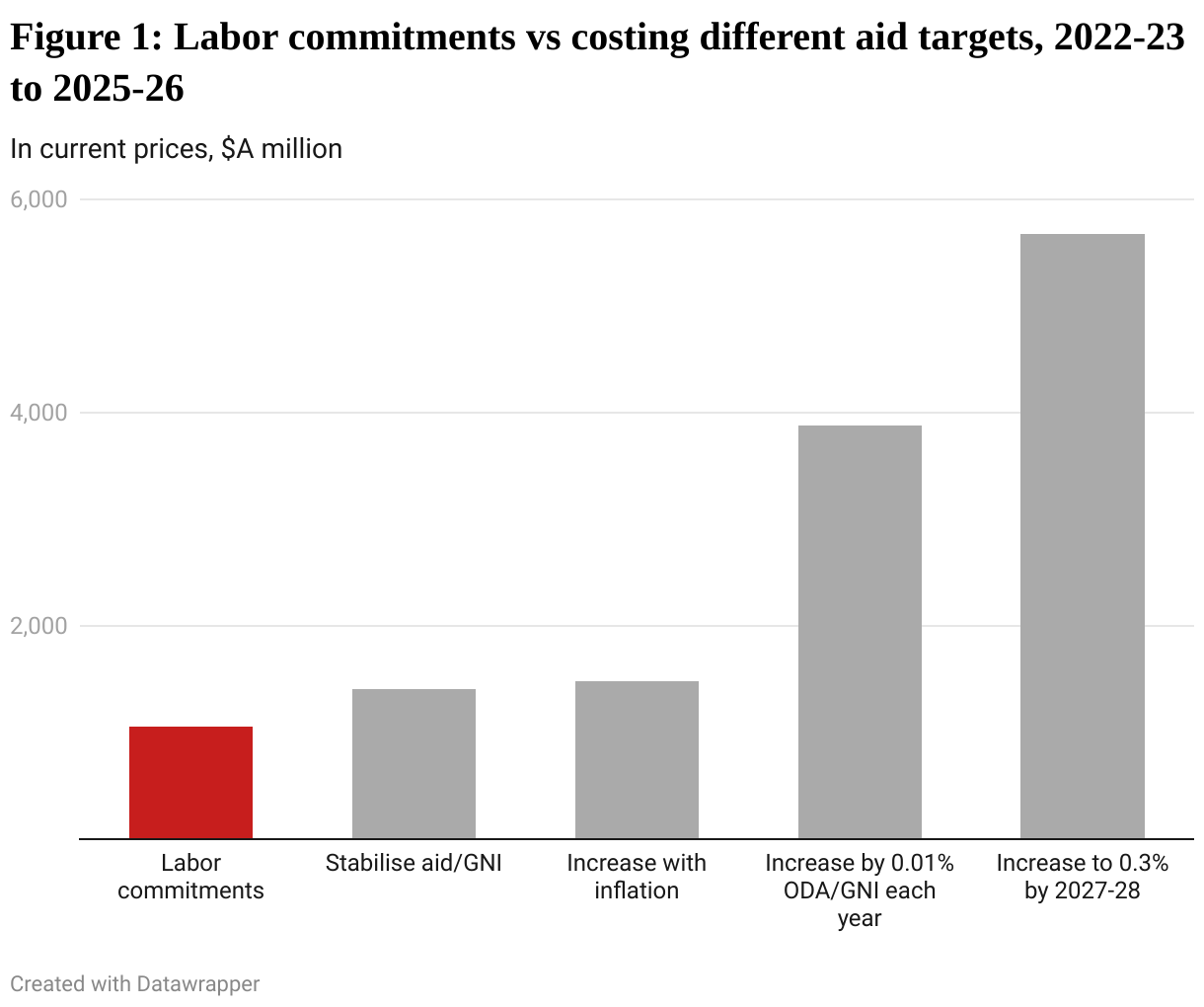 Labor’s additional aid commitments fall slightly short of the amount required to increase aid in line with inflation and GNI.

Labor’s 2022 election commitments are also below the additional $1.66 billion over four years that Labor promised at the 2019 election. Looking out to 2025-26, they would result in Australian aid being even further away from the 0.5% ODA/GNI aspiration contained in Labor’s 2021 National Platform than it is today (see below).

The Australian Greens have maintained their commitment to Australia achieving the United Nations’ endorsed target of 0.7% ODA/GNI by 2030.

Significantly, the Greens have not made aid funding one of its seven key negotiating points with Labor in the event that its support was required for the ALP to form a minority government.

Based on the 2022-23 Budget and the funding announcements released during the election campaign, we have revised our comparative estimates of future aid levels under the Coalition and Labor. 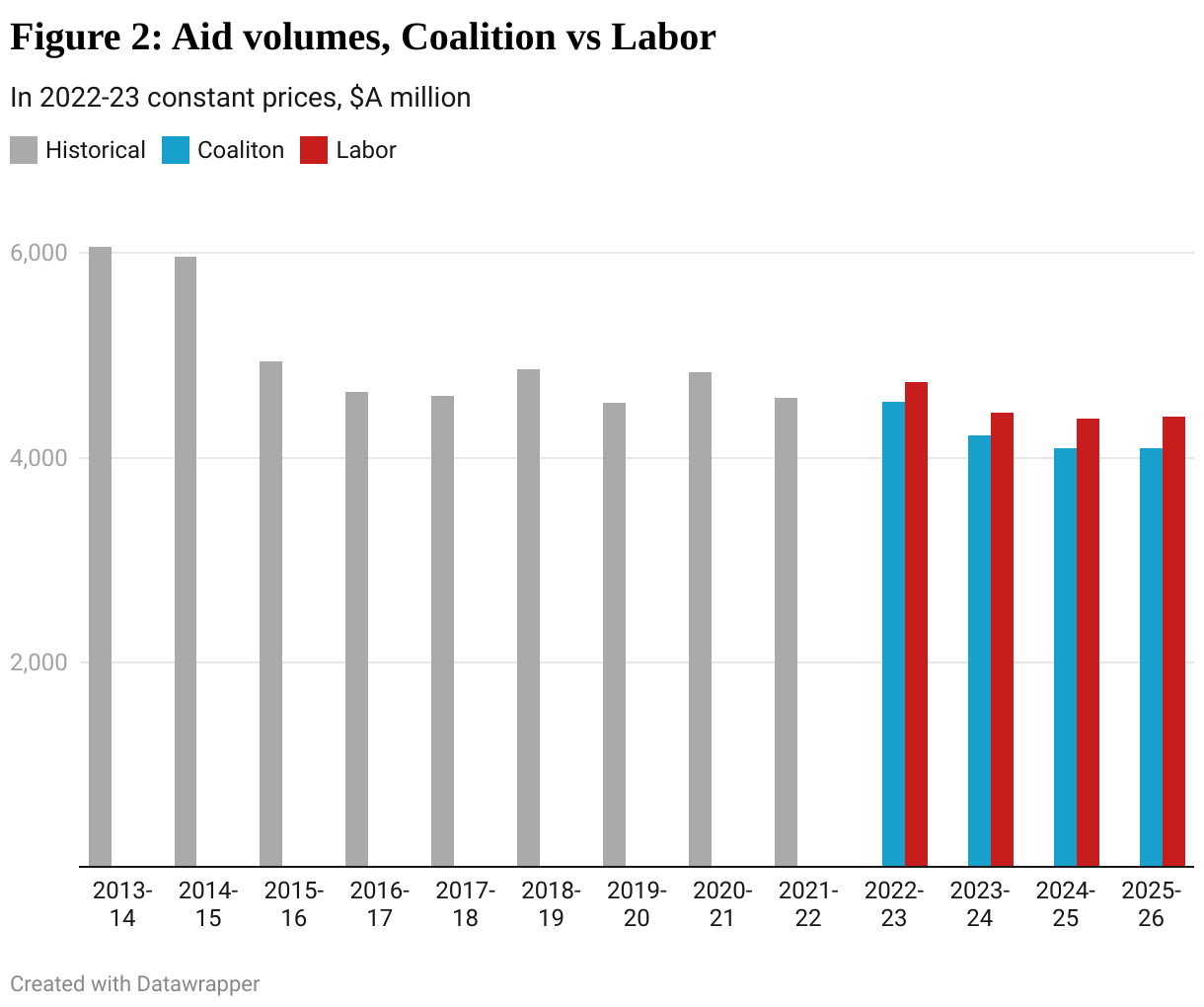 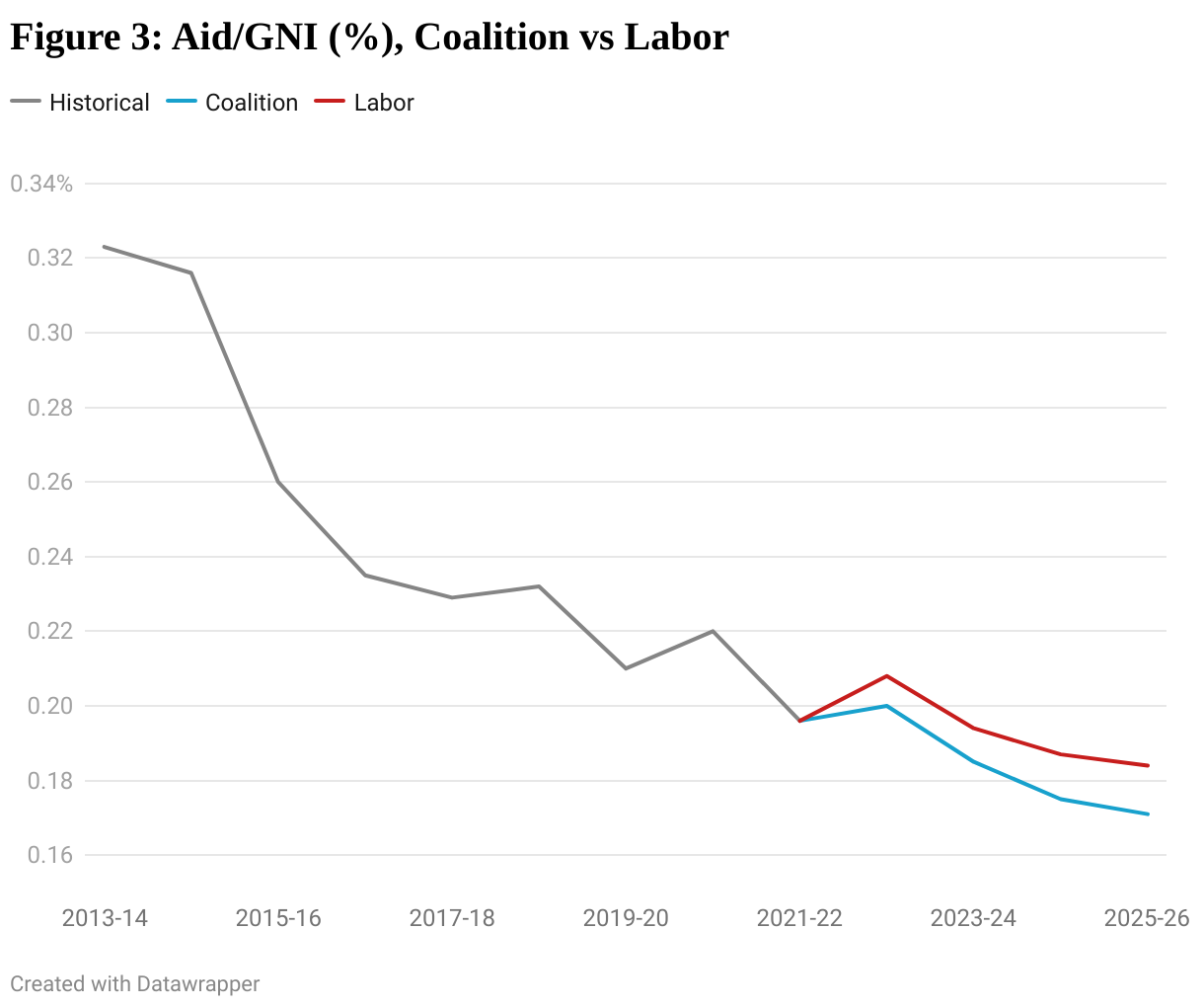