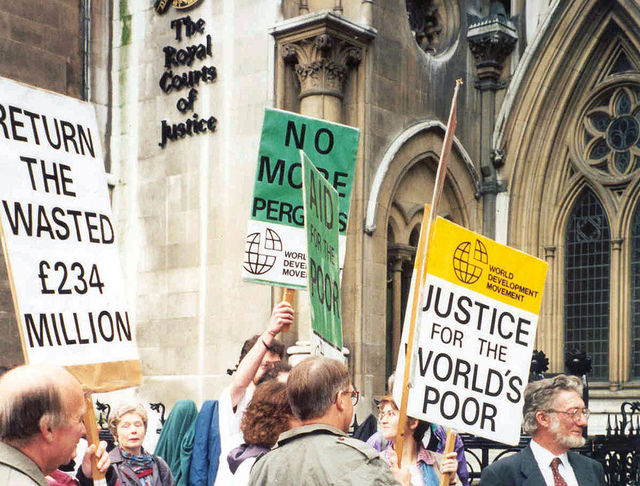 Most importantly, the brief does not examine the UK Pergau Dam case. In 1994 the World Development Movement used the UK Overseas Development and Cooperation Act 1980 [pdf] to take the UK government to court over an aid-for-arms deal between the UK and Malaysian governments. The World Development Movement won, and the UK government had to pay back £234 million to the aid program. Those who know more about this than me highlight the “profound effect it has had on the way that the British foreign aid system works today”. This case is an exemplar of legislation’s power.

In contrast, the brief asserts that where legislation exists, it doesn’t do a great deal of work (p. 6). The brief is not clear about how it assessed legislation’s ‘work’. The main criteria used appeared to be whether or not legislation had ‘bite’, and this bite was about what the legislation contained. Yet, to accurately assess legislation’s effect, its actual use and impact need consideration. Reading the UK 1980 Act’s content, one could be forgiven for thinking it was lacklustre — but when used, it had muscle.

The brief also suggests legislation has no more ‘bite’ than white papers or policy documents (p. 3). This misses the point of legislation. Legislation is an accountability mechanism in itself. Policy papers are not accountable to a court of law. Legislation is.

Laws are rules and create the conditions within which people act. Legislation’s mere presence can have an impact, as actors refer to the rule to help or hinder certain behaviour. When enforced, there is great potential for legislation to create norms; for example, a norm that aid is only used for development results or that all aid-related activity information should be publically available. Over time, these norms form the sector’s or organisation’s culture, and develop resistance to change, even if legislation is repealed. This is why the argument is made that the Pergau Dam case, and the legislation employed to prosecute it, had a long-term impact on the UK international development sector, for the better.

Potentially substantial benefits can also emerge from the legislative process. Politicians and publics do not pay much heed to aid. There are few opportunities to discuss it. The process of drafting a bill and moving it through parliament can open opportunities for broader engagement than usual – a good thing regardless of the bill’s eventual fate. (Not that I think it worthwhile to put forward a bill that its advocates do not believe would pass.)

The brief recommends against legislating for general aid guiding principles or objectives (p. 8). This recommendation is not well-substantiated. The Pergau Dam case was prosecuted under legislation that specified the purpose of aid. Given the concern the brief places on legislative repeal, it is strange that no consideration was given to legislating for purpose. At the most abstract level, publics want aid expenditure to help the poor in poor countries. Legislating for this purpose would make a law more difficult to repeal, as it would be easier to mobilise opposition to repealing such a law, and it is doubtful any government would want to expend too much political capital fighting over an aid law.

Good reasons exist to legislate for aid, particularly for purpose. Throughout aid’s existence, governments of all political stripes have used aid for non-development purposes. No other policy area has such a record of being used for a myriad of sometimes oppositional purposes. History and research show that using aid to achieve domestic strategic and economic results makes aid less efficient. Yet governments continue to do this, against the general desire of their publics. Legislation can be used to hold governments to account, and create a better norm for aid’s use.

There is no doubt that it is difficult to get a good law in place on ODA. But this is not a reason to not try, and it certainly isn’t a reason to argue laws don’t work. What it does tell us, and what anybody thinking about aid legislation should heed, is that you need to work hard to get a robust law drafted and at the very early stages think carefully about precisely what rules are required for aid, how bills might be watered down in the parliamentary process, and how to enforce and sustain legislation once passed.

Jo Spratt is an ANU PhD candidate studying New Zealand aid policy. Before this, Jo was an NGO advocate, manager and capacity-developer working in the Pacific. Jo is interested in global health, NGOs, and the practice of development and aid’s role in this. She is also a Registered Nurse.