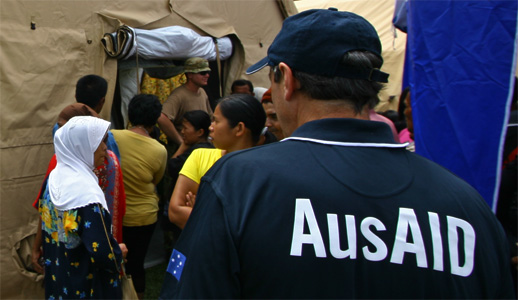 This article is part of the Aid Open Forum, a series of blogs to encourage debate, and the emergence of new ideas for the aid program. In this article, Peter McCawley considers the objectives of the Australian aid program.

The terms of reference of the Hollway Review of the Australian aid program announced by Foreign Minister Rudd last week place much weight on the objective of the effectiveness of foreign aid.  Indeed, ‘effectiveness’ or ‘effective’ are mentioned no less than 11 times in the Terms of Reference.

There is, however, one small problem. The fact of the matter (whisper it, because the emperor might have no clothes) is that nobody knows what ‘effectiveness’ really means. Everybody agrees that aid should be effective but there is no agreement at all as to what we are talking about.

It is not possible to talk about the effectiveness of any government program in a sensible way without considering objectives. And a key problem — in fact, the central problem with aid policy — is that there is no agreement on objectives.

At the broadest level, there is a deep divide between two groups of people in the global aid game — call them the ‘generalists’ (politicians and diplomats) and the ‘specialists’ (the development aid lobby).

The generalists (who win hands-down most of the time) see aid programs as a subset of foreign policy. They regard it as obvious that aid has multiple objectives, of which only one is the promotion of development. For the generalists, other key objectives are political and diplomatic goals, and commercial goals. Using foreign aid to help the Australian Wheat Board sell wheat to Iraq, for example, falls under the latter heading. Or, as Stephen Grenville pointed out recently, take the bizarre approach adopted by the World Bank of using foreign aid to help tigers.

The Jackson Committee (1984) review of the Australian aid program discussed this issue of objectives clearly. It stated (as a fact of life rather than as a recommendation) that governments almost always have three goals for their foreign aid programs – these were listed as (a) development, (b) strategic and foreign policy, and (c) economic opportunities for Australia, which equated to commercial goals. (Disclosure: I was a member of the Jackson Committee.)

The global development community tends to hate this ‘trilogy’ of goals. It regards the intrusion of political and commercial goals as a form of pollution of public policy. The development aid lobby (and other purists too) think aid should have one objective. The Simons Committee (1997) fell under the control of the purists and declared that aid should have ‘One Clear Objective’ (indeed, that was the grand title of the Simons Report!).

The Simons Committee talked quite a bit about this problem of objectives and said that, ‘We found a program that has suffered from the lack of a clear objective, leaving it open to being pulled in different directions.’ The government of the day endorsed this approach, and then proceeded to take not the slightest notice of it. The ‘one clear objective’ idea had a half-life within government of about one hour.

Why is all of this important? Because it is hardly possible to talk about ‘effectiveness’ in a sensible way until you have some clear idea about objectives. The Hollway Committee will, somehow, need to tackle the issue of what effectiveness means. But because the objectives of aid policies everywhere across the globe are constantly blurred with a myriad of different major and minor goals, it is virtually impossible to talk about effectiveness in any useful way.

It is possible to waffle about effectiveness, of course. Probably endlessly. But if the Hollway Committee deals with this issue of objectives in a vague way, then the risk is that the final report itself will tend to be vague on key issues. It would be a considerable contribution to good international development policy if the Hollway Committee were to devote several pages to a clear and sharp analysis of this waffly concept of effectiveness. Let’s see if the Committee can muster the courage to tackle this issue.

Peter McCawley is a Visiting Fellow at the Indonesia Project, ANU, and former Dean of the ADB Institute, Tokyo.