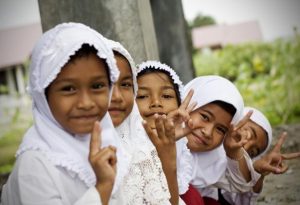 This is a guest post by Marc Purcell, the Executive Director of ACFID – the peak council for Australian aid and development NGOs, whose members work in over 100 countries.

Dewi was one of millions of Indonesian boys and girls who cannot go to schools each day because there are no schools nearby, and their parent can’t afford basic costs due to living on less than $2 a day. In Dewi’s case, there was an additional impediment – her parents wouldn’t let her attend school because there are no girls’ toilets and she shares the embarrassment of her other female colleges in having to share facilities with the teenage boys.  Now, as a result of living near one of the 2000 new schools built with Australian aid, including with separate male and female toilets, Dewi now has a chance to attend class consistently.

Robert Cannon’ opinion piece (‘That’s no way to aid Indonesia’ 10/1) asks some suggestive questions about the $500 million Australian aid package, the Basic Education Program, for schooling in Indonesia.  However, he essentially compares apples with oranges in contrasting the domestic stimulus package for Australian schools in response to the GFC with the developing bilateral aid relationship with Indonesia.

The scale and purpose of aid to schools in Indonesia is vastly different from the Building Education Revolution. Australia spent $62 billion on schools in Australia last year, while we spent $500 million in aid investment in Indonesia. This equates to 20 cents in aid to Indonesian schools for every $100 spent in Australia schools. The total Australian aid program of $4.3 billion comprises about 1% of the annual Australian budget.

The aid relationship with Indonesia has changed dramatically since the tremendously generous public and Government response to the Asian Tsunami five years ago. Bilateral cooperation systems designed initially to manage and monitor the $1 billion of official aid to the Tsunami response has burgeoned from $159 million in ODA in 2003/4 before the Tsunami to $442 million in 2008-9. It requires a detailed system of planning, implementation and evaluation between the two countries and other donors like the World Bank.

If listening to what the Indonesians want is ‘ideology’ as Cannon’ asserts, and then it is an ideology of blinding common sense. If getting the most marginalised children into school is an Indonesian priority, we should support it.  Indonesia is currently meeting its constitutional commitment to spend 20 per cent of its national budget on education (about $26 billion in 2010).

Barack Obama says that education is the best anti-poverty vaccine. International evidence shows that a better educated population has better human development outcomes over time. As a result of result of attending school for an estimated nine years, a child like Dewi can expect to have longer life expectancy, better health and a fair chance at a higher income.

Indonesia’s GDP is growing but there is still great inequality across the vast archipelago. Of Indonesia’s population of 240 million people – around 110 million Indonesians live on $US2 or less per day. All the Australian investments in schools have been made in provinces with the worst human development indicators – Sulawesi, Kalimantan and Nusa Tenaggara.

The $222 million Australia is allocating to school construction has focused on disaster proof construction to prevent the loss of life experienced in the disastrous earthquake in Sumatra last year. Supporting the building of schools, enables Indonesia to free up funding for better training of teachers so the quality of education can be improved.

More than 130,000 students have enrolled with girls accounting for more than half because Australian built schools include separate toilet facilities for girls and boys.  These schools are trying to integrate students with disabilities (2% of enrolments).  Much more could be done by Australia in disability-inclusiveness, including teacher-training around physical and learning disabilities.

More than half of Australia’s funding supports improving the quality and management of the education sector, with school construction will make up around 45 per cent of funding in coming years.  Indonesia plans to build 4700 more schools over the next five years to meet demand for junior secondary school places, and asked Australia to help fund it because of past success.

The real debate here lies not in whether we should be supporting getting kids into schools in Indonesia, but in the how. But more technical assistance in solely the form of highly paid (some would argue overpaid) consultants, as Cannon proposes, is not the answer.

The evidence shows that funding and empowering Indonesian civil society, like parent’s groups, to monitor education services and hold their government to account is the best way to counter corruption. This where our current program can focus. All new schools built by Australian aid have blackboards out the front where communities can raise concerns about spending or quality for all to see. If there is a lesson for the Australian government here, it is that a similar technique might be applied in Australia!

Marc Purcell is Executive Director for the Australian Council for International Development, the peak body for not for profit aid agencies.