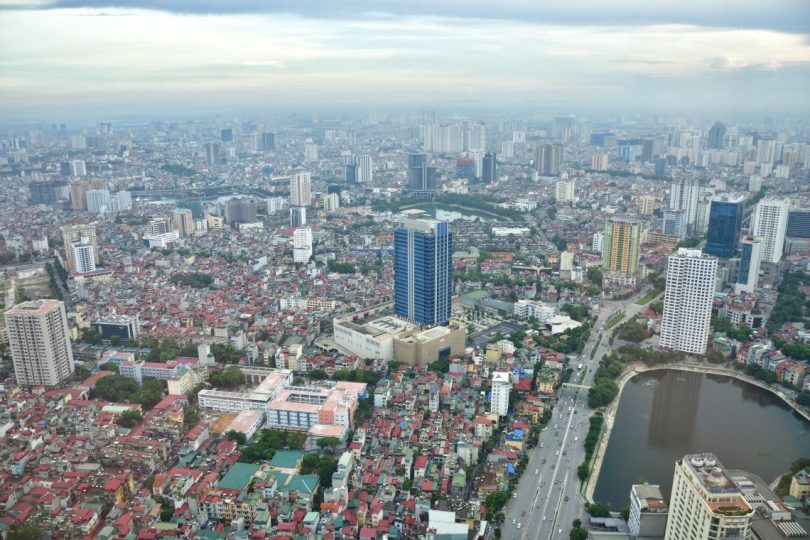 Vietnam has recently gained international accolades for its successful campaign against COVID-19 with only 332 confirmed cases and no deaths (as of 12 June), thanks to a swift action plan and a decisive three-week social distancing period from 1 to 22 April. The lockdown undoubtedly stalled the economy, as major activities, including industrial manufacturing and transportation, are reduced at significant levels. Despite this economic setback, the capital Hanoi has seen cleaner and clearer skies during the lockdown period, similar to other major Southeast Asian cities. The clean air was a positive side effect for Hanoians, whose city was ranked the seventh most polluted city in the world in 2019. The ambient air pollution potentially costs Vietnam more than 52,000 deaths every year, creating an annual loss of up to US$13.2 billion, about 5% of national GDP.

The three-week social distancing also provided researchers with an unprecedented natural experiment setting to investigate the trade-off between economic activities and air quality, and to delineate the impacts of specific economic drivers. The findings will provide insights to support evidence-based policymaking efforts towards a more sustainable future for Hanoi and other metropolises. In our analysis, we collected data from the World Air Quality Index and Hanoi’s statistics agency to examine the relationship between the average daily concentration of fine particulate matter (PM2.5) and the intensity of three major contributors to air pollution – agricultural production (emissions from livestock and fertiliser), industrial manufacturing activities and road traffic.

The relationship between economic activities and the PM2.5 index in Hanoi from January to April 2020 is illustrated in Figure 1. The bar chart plotted in the bottom half of the figure represents the percentage changes in the three economic activities compared to the base month of December 2019 (the respective base units for agricultural, industrial and traffic activities are total crop area, industrial production index and total transportation revenue for goods and passengers). For example, manufacturing activities and road traffic slightly reduced in January 2020, probably due to the week-long Lunar New Year break from 23 to 29 January. Agricultural activities were significantly lower in January as most rice fields would have been harvested in December. In April, agricultural activities bounced back to the same level as December as the new planting season started. However, both manufacturing activities and road traffic were reduced by almost 30% due to the social distancing order.

Figure 1 supports the belief that economic activities have negative impacts on air quality and sheds some light on the effects of different factors. Overall, air quality improved significantly in March and April compared to February, corresponding to reduced levels of economic activity. There is also a huge improvement compared to the same months in previous years. Among the various economic activities, agricultural business appears to have a minimal impact on air pollution while industrial manufacturing activities and road traffic seem to contribute greatly to the air pollution issue in Hanoi. This is demonstrated by the dip in the PM2.5 index during the Lunar New Year break when all manufacturing activities and road traffic eased. The PM2.5 index again dropped significantly when these activities gradually slowed down in March and April as the country braced for the second wave of COVID-19 cases. However, the PM2.5 index showed signs of bouncing back as economic activities resumed when the lockdown was lifted at the end of April.

Figure 1: Hanoi’s PMI2.5 and economic indexes from January to April 2020 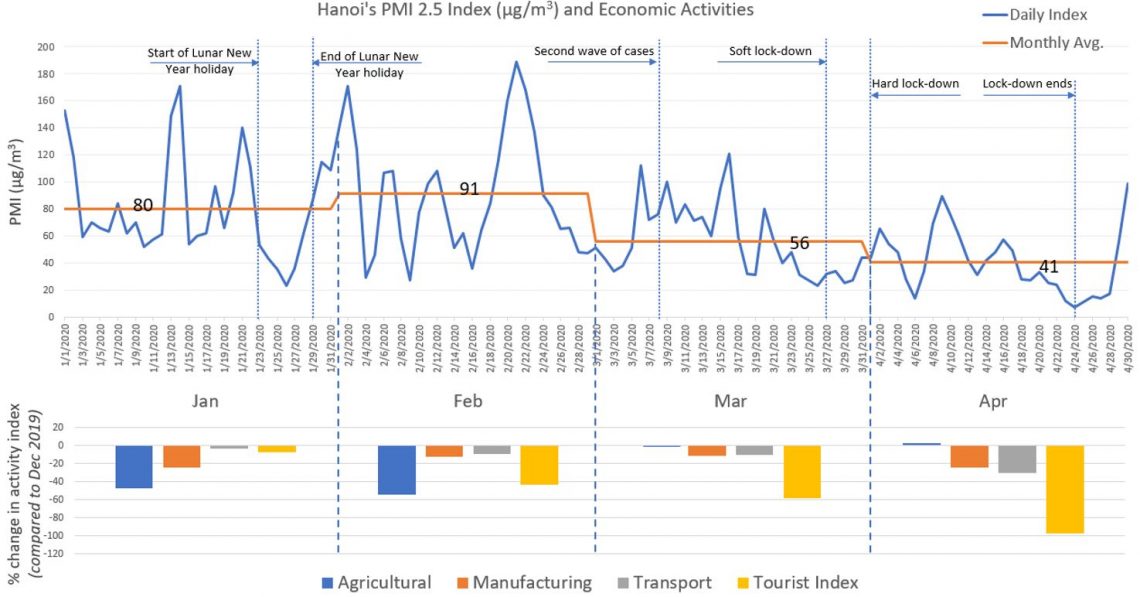 Despite the need for more granular data and sophisticated analysis to thoroughly understand and delineate the trade-off between economic activities and air quality, there are still valuable lessons we can learn from this brief analysis. Our results suggest that despite improvements in air quality during the pandemic, air pollution could worsen quickly in the recovery phase, as people have been desperate to travel, and businesses might try to ramp up productivity to make up for revenue losses. The spike in Hanoi’s PM2.5 index right after the end of the lockdown period is a clear example of this phenomenon. Such sudden accelerations might aggravate air pollution, potentially leading to severe public health costs. For example, there have been concerns that air pollution could worsen COVID-19 symptoms and potentially impede patients’ recovery. The World Bank estimates that deaths caused by air pollution could potentially cost the global economy US$255 billion in lost labour income and more than US$5 trillion in terms of welfare losses annually. The 2019 World Air Quality Report estimated that air pollution contributes to nearly seven million deaths annually, much higher than the current COVID-19 death toll.

On a more positive note, our analysis also shows that the negative effects of economic activities on the environment are reversible and the impacts can be observed in a fairly short time (e.g. a month-long social distancing period). This, however, needs careful planning and coordinated global efforts. There have been calls for governments to seize this opportunity and steer the global economy away from fossil fuels. Some of the suggested policy reforms include the adoption of carbon pricing, investments in renewable energy and energy efficiency, development of green transportation systems, recycling and remanufacturing. In Hanoi, the imminent commercialisation of the mass rapid transportation network, as well as the increasing prevalence of electric motorbikes, are some encouraging steps towards a more sustainable future. This is of special importance to the city, as well as to Vietnam, which faces unprecedented opportunities if and when global supply chains start a post-pandemic migration out of China. Maintaining economic growth while minimising negative environmental impact is crucial for the country’s sustainable development and future Vietnamese generations.

Jasmine T. Ha is Assistant Professor of Sociology, Faculty of Arts and Sciences, Vin University. Prior to joining VinUni, she was a Research Fellow at the Australian National University.

Jason Q. Nguyen is Assistant Professor of Operations and Supply Chain Management, College of Business and Management, Vin University. Prior to joining VinUni, he was a Lecturer at the UNSW Business School.