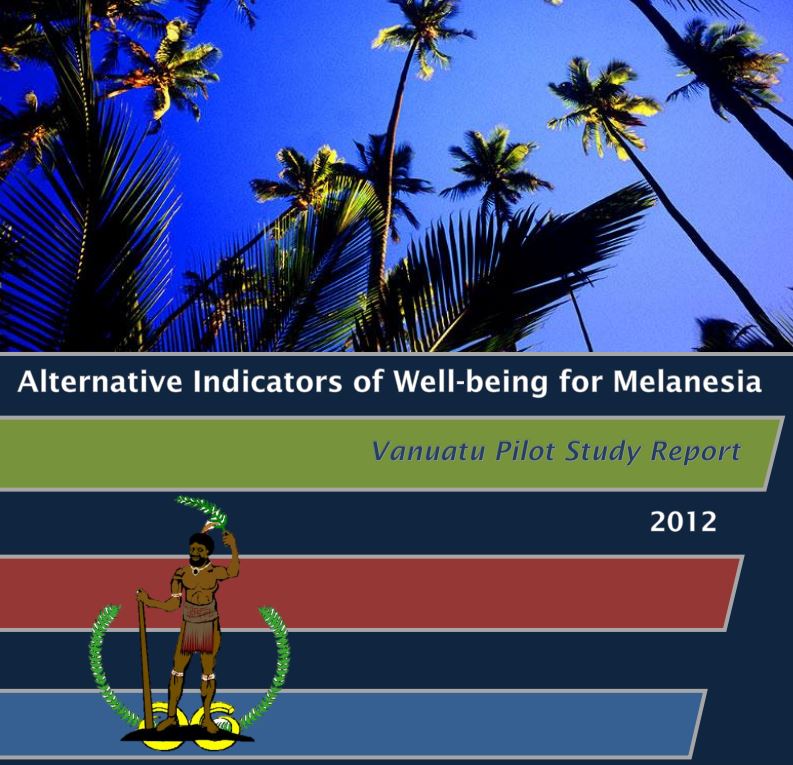 The call for a new metric

The UK-based New Economics Foundation first published “The Happy Planet Index: an index of human well-being and environmental impact” in 2006, in which countries were ranked in relation to three indicators of well-being:  life satisfaction, life expectancy, and ecological footprint. The report declared Vanuatu, one of the world’s most impoverished countries, to be the world’s happiest.

Can the happiest country in the world be, at the same time, one of the least developed? The Happy Planet Index finding alerted leaders in Vanuatu to the need for new indicators to be developed. These would take into account the income-neutral factors contributing to well-being for Melanesians, rather than solely relying on GDP and associated development metrics to measure success or progress.

The project to track Melanesian well-being began in June 2010, with the first regional stakeholders meeting in Mele Village, Vanuatu. Statistical and cultural authorities from Fiji, Solomon Islands, Kanaky New Caledonia, Papua New Guinea, Bougainville and Vanuatu discussed the contributing factors to well-being within a Melanesian context. Three distinct and unique domains of well-being emerged from the meeting: access to land and natural resources; cultural participation and; community and family vitality.

Further social research was conducted to determine what information is most relevant and how questions could be phrased to obtain such information. This included focus groups with youth, women, community leaders and ni-Vanuatu social researchers. Fieldwork was conducted in 2011 and 2012 by the Vanuatu National Statistics Office and a report of findings from the pilot study was launched in August 2012 by the Malvatumauri National Council of Chiefs.

Impact of the Vanuatu pilot study

Regional interest in the ‘Alternative Indicators of Well-being for Melanesia’ project grew immediately following the initial launch of the pilot study report and online release of a documentary highlighting the key outcomes. The report illustrated a correlation of subjective well-being to natural resource access, traditional knowledge and community vitality in Vanuatu, implying policy relevance for sustainable economic and social development. The prime ministers of Papua New Guinea, Solomon Islands and Fiji and the leadership of the Front de Liberation Nationale Kanak et Socialiste (FLNKS) endorsed the project. They ordered a pilot trial of the alternative indicators in their countries, with the aim of developing a regional well-being index for the Melanesian Spearhead Group (MSG).

In early 2012 the pilot study also caught the eye of the Statistics for Development division of the Secretariat for the Pacific Community (SPC). Several of the indicators piloted in Vanuatu, such as indigenous language prevalence indicators, natural resource access indicators, and traditional production skills and their use, were included in the Pacific Living Condition Survey in order to provide context to the standard income and expenditure information produced in such surveys. This resulted in Vanuatu leading the region by achieving eight of the 12 reported National Minimum Development Indicators (NMDIs) for culture as of 2013.

A number of academic papers have referenced the report since its launch. One notable example of academic testing and application of the alternative indicators can be found in a recent paper by Simon Feeny, Lachlan McDonald and Alberto Posso of the School of Economics, Finance and Marketing at RMIT University. The paper explored the relationship between poverty and happiness using data from Solomon Islands and Vanuatu that revealed a critical shortcoming of traditional monetary poverty indicators. Contrary to what is found to be true in Western developed countries, the level of income does not explain variation in happiness in either of these Melanesian countries, leading the authors to conclude that “the quest for alternative indicators of well-being in the region is therefore well justified”.

The greatest impact of the 2012 pilot study is yet to be seen. The former prime minister of Vanuatu, Hon. Moana Carcasses Kalosil Katokai, commenced national consultations in early 2013 towards a sustainable development plan, which will incorporate the alternative indicators in the monitoring of national policies, programs and projects beginning in 2016. Inclusion of the alternative indicators in the national policy framework moves the measures from the realm of discourse to practical application. This means that there is real potential for long term changes in decision making and increased public participation in the political process.

A central component for human development, according to the UNDP Human Development Index, is for all people “to have access to resources needed for a decent standard of living”. The information obtained in the pilot study on well-being in Vanuatu illustrates how customary lands serve as a more effective resource than money for the vast majority of families. Access indicators for customary lands, forest and marine resources, and traditional wealth items, combined with indicators of traditional production skills, form a uniquely Melanesian measure of reliance on the cash economy. It is this increasing reliance on cash that promises to be the greatest threat to well-being in the region.

A follow-up of the pilot study is set to take place in 2015, which will establish the baseline for well-being in Vanuatu.

Jamie Tanguay is Project Coordinator for Alternative Indicators of Wellbeing for Melanesia, housed within the Melanesian Spearhead Group Secretariat.

Jamie Tanguay is Project Coordinator for Alternative Indicators of Wellbeing for Melanesia, housed within the Melanesian Spearhead Group Secretariat.