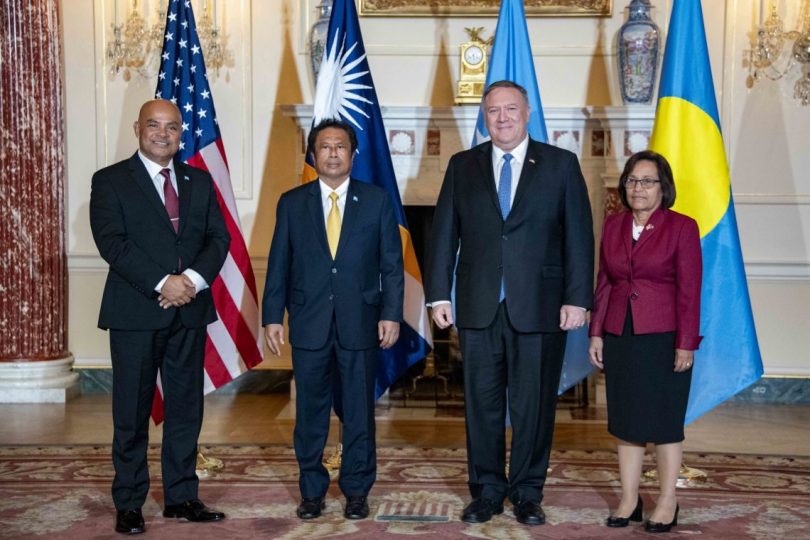 US Secretary of State Michael Pompeo hosted the President of Palau Tommy Remengesau, President of the Marshall Islands Hilda Heine and President of the Federated States of Micronesia David Panuelo in Washington DC in May 2019 (Flickr/US Department of State/Ron Przysucha)

From the United States’ point of view, the Compacts of Free Association negotiated from the 1960s to the 1990s were primarily strategic in nature, with the US Department of Defense closely involved at every stage of the negotiations. The compact states, after all, were part of the world’s only United Nations strategic trust territory from 1947, a status that enabled the United States to conduct nuclear experiments there from 1946 to 1958, with adverse health consequences for some Marshall Islanders that linger to this day.

The Compacts of Free Association are both permanent and renegotiable. The compacts themselves last indefinitely unless terminated by both sides, giving Washington a veto. But their financial provisions – the compact funds that underwrite much of government expenditure – end in 2023 for the Republic of the Marshall Islands (RMI) and the Federated States of Micronesia (FSM) and in 2024 for the Republic of Palau (Palau).

The US position has long been to render the RMI and the FSM financially independent by the mid-2020s, replacing compact funds with income from permanent trust funds. Much effort has gone into attempting to achieve this goal through the Joint Economic Management Committee in the FSM and the Joint Economic Management and Fiscal Accountability Committee in the RMI, but the countries’ economies are too fragile for this to be possible. They remain highly aid dependent. As the title of a 2019 United States Government Accountability Office report puts it, Trust funds for Micronesia and the Marshall Islands are unlikely to fully replace expiring US annual grant assistance.

Current arrangements offer the compact states nothing more than survival on inadequate trust funds, opening an opportunity for other players such as China to come to their rescue. The Department of State’s position is that ‘as the scheduled end of US economic assistance is fast approaching, now is not the time to leave these small sovereign partner nations open to the predations of larger countries’. The US perception of this threat was heightened by the defection of two Pacific countries – Solomon Islands and Kiribati – from recognition of Taiwan to China in September 2019, which seemed to serve as a precedent for Palau and the RMI to follow suit. Palau’s economy rests in part on tourism and suffered considerable losses when in 2017 China instructed tour operators not to book package tours to Palau because it is not on the official list of approved destinations for Chinese travellers. This move was widely interpreted as an attempt to pressure Palau on its recognition policy. In the case of the RMI, China is seeking similar results by imposing extra taxes on RMI-badged vessels entering Chinese ports, conforming with its policy towards ships from Taiwan-recognising states, according to Grossman et al (2019).

Hence, in recent months, negotiations have begun over renewing the financial provisions of the compacts. Their countries’ relationships with the United States were central to discussions when the Micronesian presidents – Tommy Remengesau Jr (Palau), David Panuelo (FSM) and Hilda Heine (RMI) – met the US president in May 2019, the first time all three Micronesian leaders had been together at the White House. Veteran Palauan leader Thomas Remengesau Jr emphasised that his country’s:

steadfast reliability makes Palau and the other Freely Associated States natural allies in the Pentagon’s new Indo-Pacific strategy, a plan to counter Chinese expansionism and its militarization of islands in the region.

In August 2019, Mike Pompeo became the first US Secretary of State to visit Micronesia. At Kolonia in Pohnpei he announced that the United States had begun negotiating an extension of the compacts, which ‘sustain democracy in the face of Chinese efforts to redraw the Pacific’. Subsequently, in October, Washington despatched a team of negotiators to begin talks over the compact with Palau. Soon afterwards, US officials were in Micronesia on a Compact Listening Tour seeking the Micronesian perspective on new arrangements.

Pompeo announced US$65 million in new assistance to the region as part of the Pacific Pledge, a US counterpart to Australia’s Pacific Step-up and New Zealand’s Pacific Reset when he met with Pacific Island leaders on the sidelines of the UN General Assembly in September 2019. The pledge is worth US$100 million in total. At the same time, the United States will embed security advisers in Palau, Fiji and Solomon Islands and USAID will expand its presence in Fiji and Papua New Guinea as well as the FSM, the RMI and Palau. Ironically, the aid announcement specifically recognises threats to the region caused by sea level rising although the United States withdrew from the Paris Agreement on climate change.

The nuclear issue is sure to arise in the RMI’s negotiations with the United States. The RMI observes Nuclear Victims Remembrance Day each year, and the 2020 march for justice led by President David Kabua had the theme, ‘we will not forget and we will not be deterred’. The RMI will almost certainly seek a reopening of discussions about nuclear compensation in the new compact.

All three compact states will want continued visa-free access to the United States and will also seek a continuation of the discretionary federal programs that are paid in addition to compact funds which help to support education, health, infrastructure and research. They may also want an extension of the social and medical benefits for Micronesians living in the United States such as Medicaid, for which they are presently ineligible.

Whatever their demands might be, the rise of China in the Pacific means that the United States is likely to listen carefully.

This blog is the second in a two-part series. You can find the first blog here.

This is an edited version of In Brief 2020/05, originally published by the Department of Pacific Affairs at ANU as part of their In Brief series.