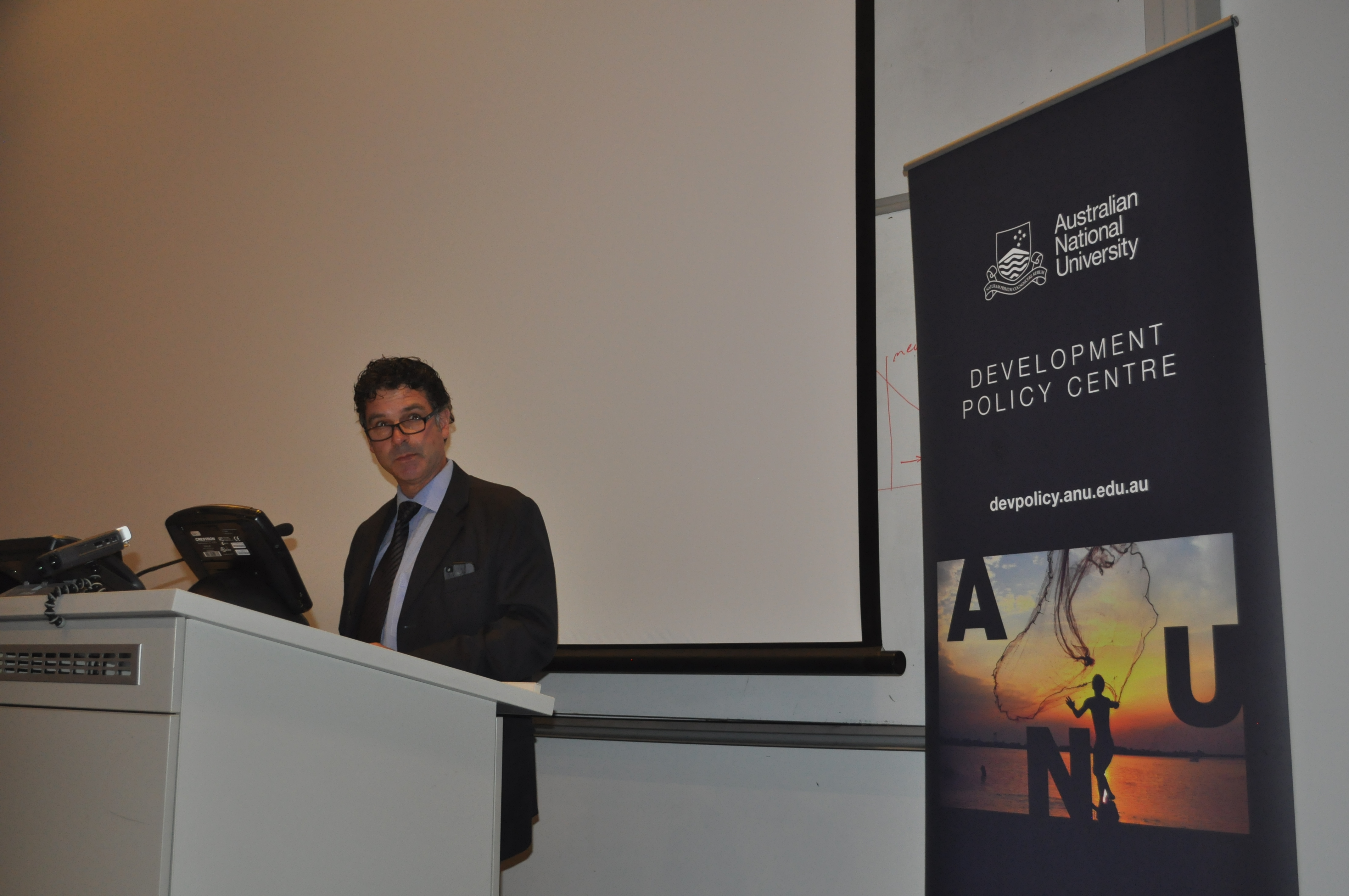 For the best part of a decade I have been coming to Canberra on budget night, to hear of the future plans for the aid program, and to catch up with colleagues and friends of the aid program.

Yet yesterday, something was different.

My plane was not delayed due to fog as is often the case this time of year.

The sun was shining all day and wearing a suit jacket was more for satisfying ones sartorial splendour than for warmth.

And late in the afternoon I enjoyed a joke with my taxi driver how strange it seemed that the world was about to end at 730pm when the budget was released yet it was such a fine day.

As it turned out, the world did not end, and I argue that the aid budget is also not a signal of total doom and gloom…unless of course your job is to write the headlines for news stories and claim an axe has felled aid spending, as one news house has done.

Is it a broken commitment, by flat-lining for two years before indexing to CPI?

Is the aid budget lacking generosity?

That probably depends on how one defines generous in the context of an overall tight budget for Australia.

Soon after this Government was elected I commented in an interview that I was “cautiously optimistic” about the future directions of the aid program while reflecting on the signals being given by the Foreign Minister.  Leading into last night’s budget release I was still reasonably optimistic.

Today I remain cautious, unsurprised, and believe there is enough to be optimistic about, but for such optimism to be realised, a few more planets need to align.

In the next few minutes I intend to share some observations about the budget information that has been made public, some thoughts on where opportunity might present itself and where gaps, questions or concerns might still exist.

But before any of that, I think it is tremendously important we pause to reflect on seven words…

Nor is it six or seven or eight billion.

But it is five billion.

That is not insignificant.

Our challenge is to stop thinking about how that amount should be spent.  Our challenge should be to come up with ways to make that amount work hard, to lead to effective outcomes, and to create leveraged opportunities such that the results far outweigh what five billion alone could achieve.

So, I would like to discuss just three things:

In the absence of a policy being released last night, the closest thing we can draw from is a paragraph from the joint Ministerial statement that the focus will be on the drivers of economic growth (trade, infrastructure, education, health and empowering women and girls.

Thankfully the next sentence in that joint statement tells us the aid program will be guided by a new aid policy and performance framework.

I am a little disappointed that the new aid policy is still yet to be released.

I am equally sure that we have all read and heard enough snippets that point to some of what the policy might eventually communicate, and the budget allocations in part shed some light.

One element in particular I expect will feature is the increased role of the private sector in contributing to some of the drivers of economic growth and poverty reduction.  What is less clear is the sequencing of thinking to policy to practice.

We are informed that the aid policy is likely to be released in the next couple of weeks and even if that is pushed back a little, one must imagine it is broadly complete.

Yet, there is still a live Parliamentary Inquiry into role of the private sector in promoting economic growth and reducing poverty in the Indo-Pacific region.  Submissions to this Inquiry were being received up until last Thursday, and I have been told that discussions, hearings and consideration of submissions are not being rushed to ensure evidence is considered to inform future directions…

…so what does that mean for a new aid policy with an imminent release?

…and what if any impact might that have on forward estimates?

While forward estimates have been shared at an aggregate level that the budget will hold initially around the five billion mark before being indexed to CPI, at a more granular level detail is still absent.

It is possible the greater clarity about forward projections exists.  But at the same time we are still awaiting the release of the performance framework that I expect include performance benchmarks.

The consultation paper that formed part of the process that was undertaken for the establishment of performance benchmarks for the Australian aid program, stated early and very clearly that the intent was to improve the accountability of the aid program and link performance to funding…

…accountability and transparency is excellent…as is performance-linked funding…

…but what if any relationship does this have to greater specificity (or otherwise) of forward estimates?

In terms of the regional focus, it is not a great surprise that there is a greater focus towards Asia Pacific, with the stated rise in investment from 89% to 92% of the program.

For the most part, as Stephen and his team have presented, investment volumes at the country level remain relatively consistent with the current financial year, with some notable exceptions such as PNG.

And while it is also not surprising how the Africa and Latin American & Caribbean programs have been impacted deeply, particularly in the case of Africa that is still somewhat disappointing, hence it becomes even more crucial that investment is well targeted.

At the moment on the information presented about Sub-Saharan Africa for example, which is largely what can be derived from country-level website updates, is still reasonable generic around broad themes that would seemingly require greater honing to ensure investment effectiveness.

Generally, the information that has been shared at this point about country and regional focus, which is in the form of some website updates, is sparse and stylised for a web audience as opposed to a sophisticated stakeholder group such as the audience here today.

This reaction might in part be a consequence of the separation anxiety many of us have in not adding to our collection of Blue Books.

But it is actually more fundamental than that…

…it talks to transparency.

I am not talking transparency in the context of trust – I don’t think there is any reason to lack trust.  I take the Foreign Minister’s word that transparency will remain part of the future fabric; so accept this may be an issue of timing.

As such, I am commenting on lost or maybe delayed opportunity.

If we recall some of the top-level findings from the recent Aid Stakeholder Survey that was led by the team here at the Development Policy Centre, we would remember one aspect that was broadly consistent across all surveyed stakeholders – that we are all in this for the right reasons and these reasons are remarkably the same.  As the report concludes, “there is more that unites than divides”.

As such, I firmly believe that each of us, NGOs, private sector, public sector, academia, individuals, want to understand the detail so we can see where and how we can contribute to the aid program.

It is in this context that I argue transparency, and timeliness of information, is essential and might be one aspect where a little more work can be done.

I am not attempting to paint a rose-tinted view of the world here, for we cannot ignore the concept of vested interests (another similarity reported in the Stakeholder survey).  But I firmly believe that those of us, who are in this for the right reasons, genuinely want to contribute; and those who are in this for the wrong reasons generally go the way of natural selection.

From the IDC perspective, this means drawing on our Members’ long history of involvement in and with the Australian aid program.

From a broader aid industry perspective, I suggest this means breaking down artificial barriers between different actors in the aid program, for none of us are the solution for everything, yet together we might get a little closer to the results we all seek.

I am encouraged by more regular discussion and engagement between the IDC and ACFID, and Marc the engagement with you and your team I personally value…I think the recognition including in your Executive that we each have a role to play and together we can make a difference is pleasing, so let’s harness the momentum we have begun to create.

I believe we are at a moment in time.  We have a choice, collectively and individually.

We can choose to be disappointed that we are not on a journey to a magical percentage of GNI.

We could choose to focus on what we are likely to get, or lose.

Or we could acknowledge that this Government is still investing five billion dollars on the aid program, and if we are in this for the right reasons, we will grab this challenge collectively, recognise our relative strengths, and harness them to leverage efforts and create a better world.

It is a choice and I choose cautious optimism and a commitment to working together.

And I hope that is something we all choose.

This is a copy of Mel’s speech delivered at Devpolicy’s 2014 aid budget breakfast. Speakers powerpoint presentations are available from our website, and a podcast of the event will be available in the coming days.

Mel Dunn is Chair of International Development Contractors (IDC) Australia, which brings together private sector companies who are experienced, innovative and effective in delivering international aid to the world’s poorest countries