In the wake of the recent leaders’ meeting of the Quad (Australia, India, Japan and the US) in Tokyo and its focus on development issues, it is worth looking at Japan’s aid program. This follows our recent two-part blog on the US aid program under the Biden Administration.

Under the 2015 Development Cooperation Charter – a revision of the 1992 Official Development Assistance (ODA) Charter by former Prime Minister Shinzo Abe’s government – the objectives of Japan’s development cooperation are “[to] contribute more proactively to the peace, stability and prosperity of the international community” and “ensuring Japan’s national interests such as maintaining its peace and security, achieving further prosperity, realizing an international environment that provides stability, transparency and predictability, and maintaining and protecting an international order based on universal values.”

The charter requires that Japan’s government regularly publishes a white paper on development cooperation, setting out its aid priorities and achievements. The 2020 White Paper highlights the importance of Japan’s aid as a tool to support its foreign policy goal of a “Free and Open Indo-Pacific”. Japan has recently flagged a review of the charter and future aid increases, citing the impacts of COVID-19, China’s increased development engagement, and Russia’s invasion of Ukraine.

Japan’s development assistance consists of both grant and non-grant concessional finance (sovereign loans, multilateral lending, private sector financing), with the latter comprising around half of its total grant equivalent aid in 2019. 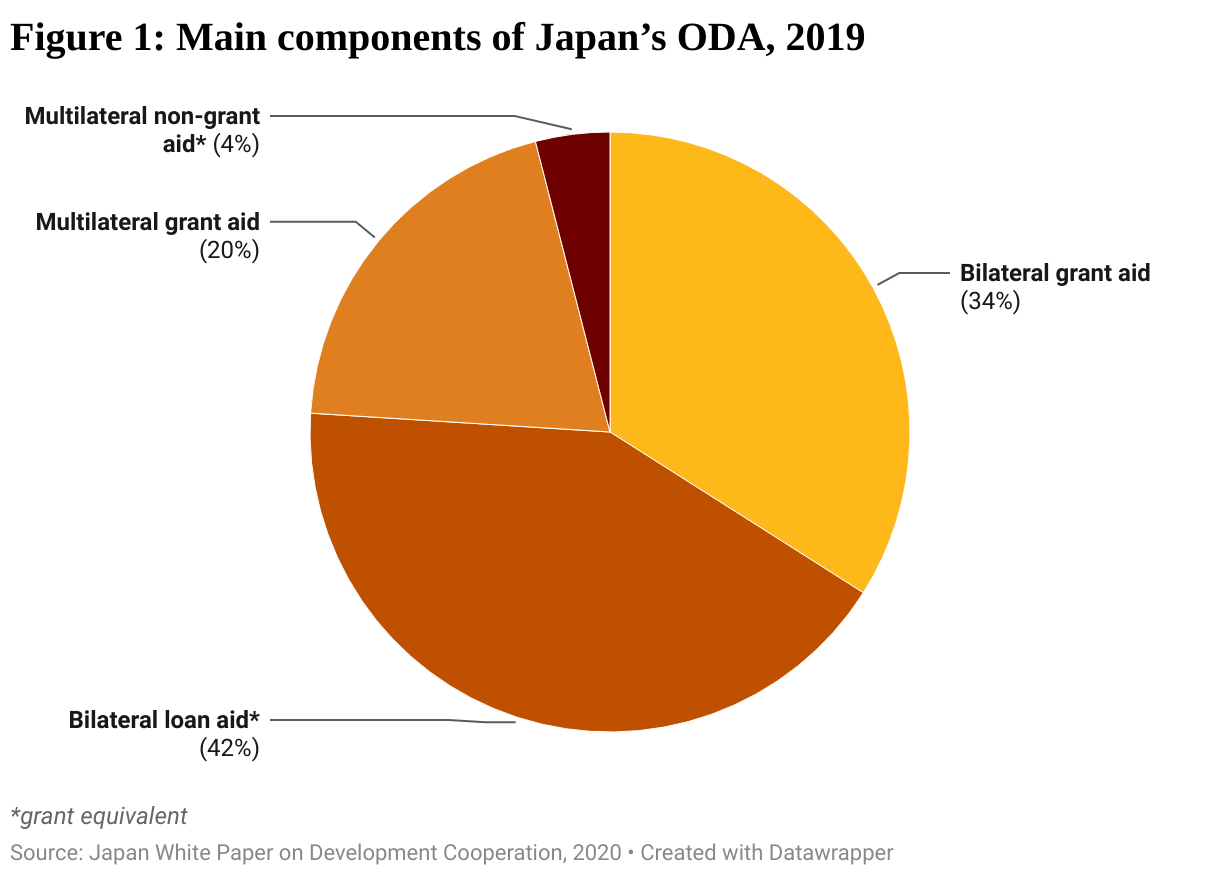 In 2021, Japan’s aid increased in real terms by 12% (to USD17.6 billion) making it, in volume terms, the OECD’s third largest aid donor, after the US and Germany.

Japan has also climbed up the aid generosity ranks. As a proportion of gross national income (GNI), its aid has increased year-on-year since 2016, reflecting Tokyo’s growing concerns about China’s regional assertiveness and a more confident foreign policy under Abe and his successors. In 2021, Japan overtook the OECD donor average (0.33%) for the first time in two decades. This contrasts with Australia’s successive budget cuts and declining aid generosity between 2013 and 2020. This gap will widen if looming real cuts to Australia’s aid proceed and Japan’s aid continues to grow. 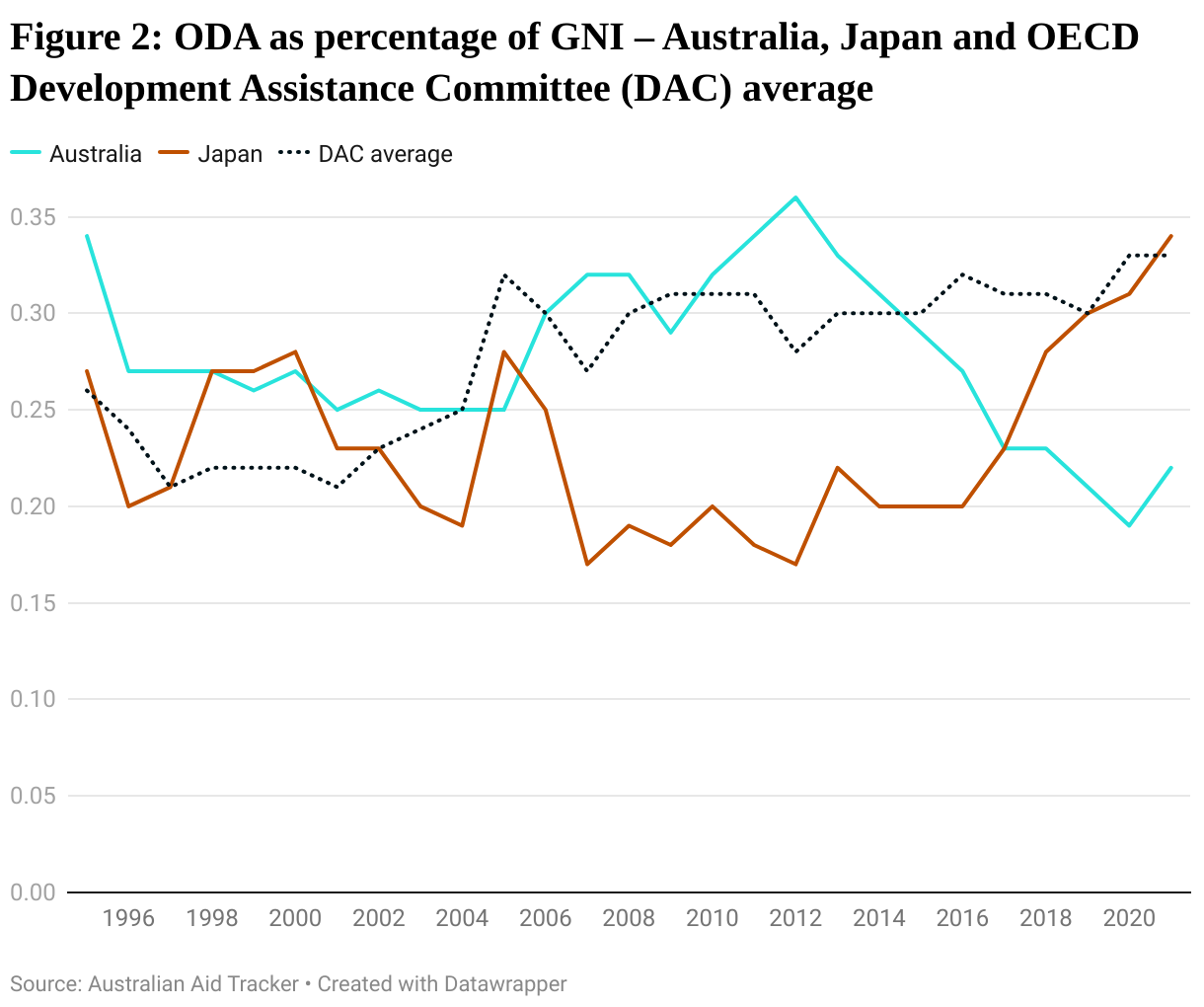 Compared to its peers, Japan spends a very large share of its aid (46% in 2020) on economic infrastructure (transport, communications, energy). This is much higher than other OECD donors (17% average; 10% for Australia), and contrasts with most Western bilateral donors for whom social infrastructure (health, education, water and sanitation), governance and humanitarian assistance are a bigger focus.

Climate change is also increasingly important, with Japan committing an additional USD10 billion in climate finance over five years at the 2021 Glasgow climate summit. This is on top of the annual USD11.8 billion in public and private climate finance that Tokyo has pledged to maintain until 2025. Japan has also joined other G7 donors in a new agreement to end public financing for overseas fossil fuel projects by the end of 2022.

As well as its policy goal of “quality growth”, Japan’s focus on economic infrastructure reflects the prominent role that state support for domestic companies, exports and technologies has played in the evolution of its post-war aid program. While the majority of its country aid goes to middle-income countries, Japan has only committed to untying its aid for least developed countries (LDCs). In 2018, 32% of Japan’s aid to non-LDCs remained tied to domestic firms. Since 2015, this has included the use of ODA to supply Japanese-built maritime surveillance capabilities and coastguard vessels to countries such as the Philippines, Vietnam and Indonesia. 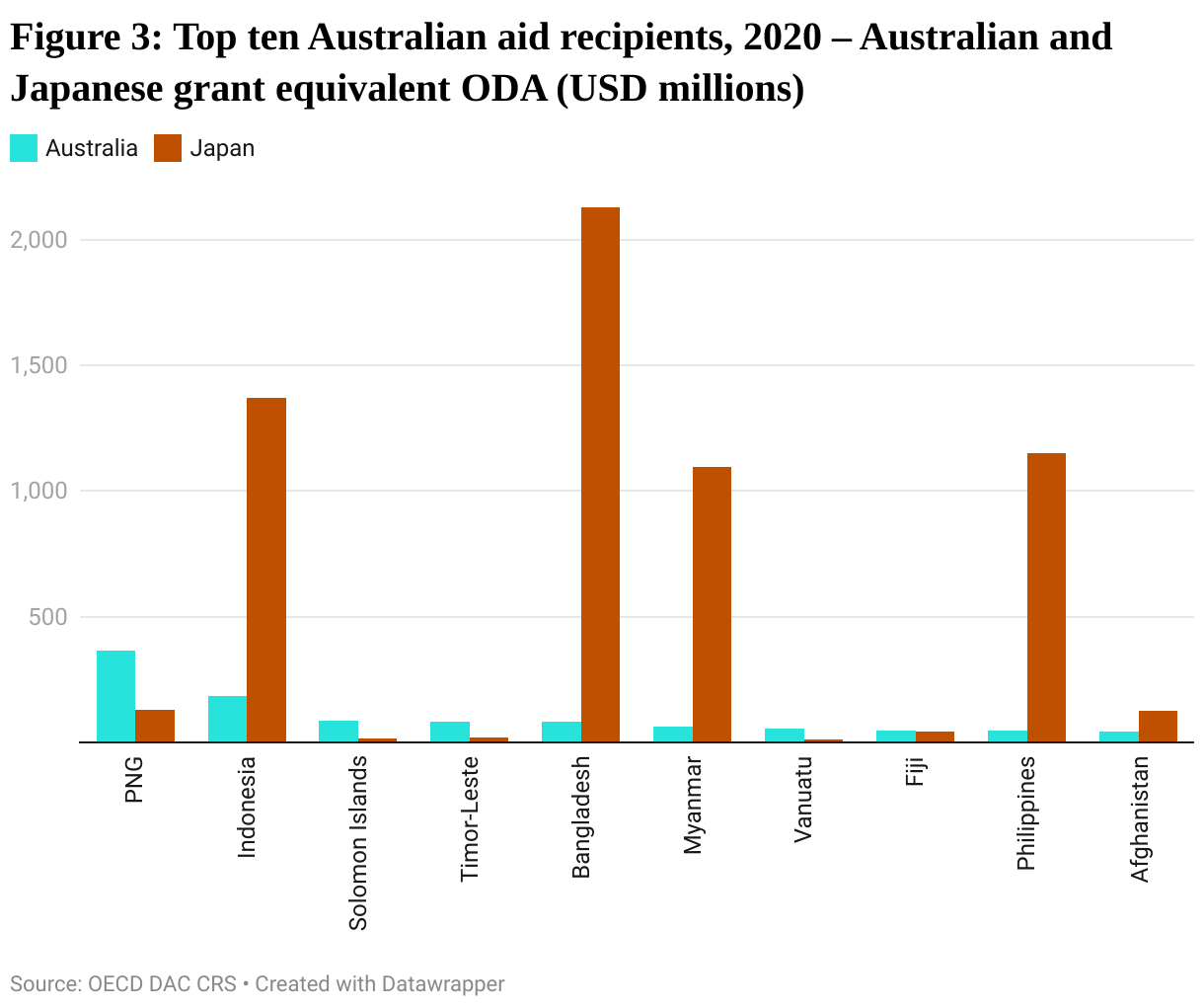 Japan is also a prominent Pacific donor. Japan provided USD329 million in aid to the Pacific in 2020, with Papua New Guinea (USD127 million) and Fiji (USD42 million) its two largest bilateral recipients. Japan has also been active in supporting Pacific regionalism through the triennial Pacific Islands Leaders Meeting, and via its support in areas such as oceans and fisheries management, climate change and disaster relief, economic connectivity and human resource development.

Pacific leaders have welcomed Japan’s commitment to net-zero by 2050 and to reduce greenhouse gas emissions by 46% (from 2013 levels) by 2030. Tokyo’s controversial plans to release one million tonnes of treated wastewater from its crippled Fukushima nuclear power plant into the Pacific Ocean remains, however, a significant point of contention with the region.

On aid effectiveness, a 2020 OECD peer review of Japan’s aid recommends greater development policy coherence, more core support for multilateral and civil society partners, increased investment in the capabilities of locally engaged staff, and a greater use of strategic evaluations. Pointedly, it also recommends that Japan “continue to completely untie its aid covered by the DAC recommendation, while monitoring the impact of its declining share of untied aid overall and working to reverse it.”

In terms of donor cooperation, as well as the Quad, Japan and Australia are founding members (along with the US) of the trilateral Blue Dot Network. A counterpoint to China’s Belt and Road Initiative, the network, which is supported by the OECD, aims to promote “quality infrastructure investment that is open and inclusive, transparent, economically viable, Paris Agreement aligned, financially, environmentally and socially sustainable, and compliant with international standards, laws and regulations.” It is not clear whether any projects have been certified by the network to date.

Bilaterally, a 2011 MOU between the Japan International Cooperation Agency and the former AusAID remains on the DFAT website but does not appear to have been updated in the decade since it was signed. Given our converging foreign policy and development interests, particularly when it comes to Southeast Asia, the Pacific and climate change, refreshing this agreement would be a good starting point for a new government looking to bolster its cooperation with Japan.