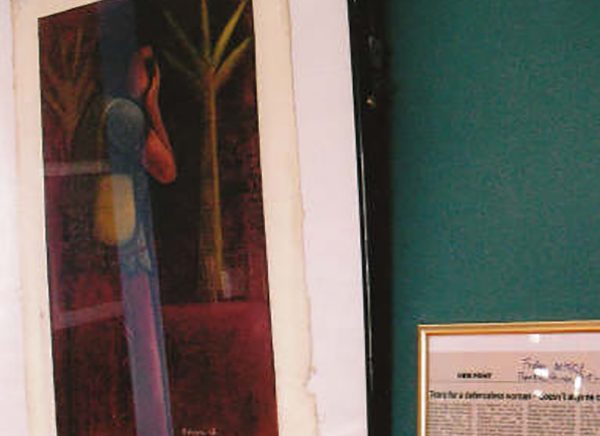 I’ll never forget the time I saw a grown man punch a woman in the face. Repeatedly. Not on the telly or internet, but “in real life”, as my four-year-old daughter would say.

It was 2008 and I was conducting fieldwork in Port Moresby for what would become my PhD and eventual book. At the time I was sitting on the footpath outside of the Stop and Shop supermarket in the suburb of Boroko. I was interviewing a couple of guys about their take on a nearby protest when we heard an argument, seemingly between a 30-something-year-old man and his similarly-aged wife.

The yelling reached fever pitch as a crowd started to gather around the pair. Then all of a sudden: ‘whack’. He punched her with such force that blood spilled from her nose. She swayed but stayed upright.

The yelling between the two continued and then another blow. ‘Crack’.

No one in the crowd physically confronted the man as punches and kicks mixed with yells and screams. The woman didn’t fight back.

I was so outraged I started to stand up – surely someone had to do something. The two blokes I was with stopped me from trying to intervene. As a skinny self-declared pacifist there was little I could do. And worse, as my two friends knew, getting involved would have likely resulted in my own beating.

Eventually the attacker ran out of steam, the crowd dissipated and the woman walked away sobbing.

I went home, sad and angry.

That night I poured out my frustration into a letter to the PNG Post-Courier. Here’s a snippet of what I wrote:

… I have visited PNG a number of times before and have experienced deep warmth, hospitality and generosity. I have also seen the love and affection that Papua New Guineans show towards their families and Wantoks – especially their women folk. I am from Australia, so there are certain things I may not understand but could someone please tell me how acts of violence against women have become acceptable?

I would like to hear from concerned citizens of this country who are against brutal acts of violence against women. Please write in to this paper, voice your concern to radio stations, or write to your local MP. Please help to restore some of the faith I have in the people of this wonderful country; a faith which began to wash away with the tears of a defenceless woman on Wednesday afternoon.

OK, so perhaps the language is a bit flowery. And there are tinges of white saviour complex in there. But at the time it felt important to do something. Although, writing that letter also felt like I wasn’t doing very much at all. What that woman needed was someone, or a bunch of people, to physically restrain her attacker. Words seemed hollow.

The letter was published and received a few replies from readers. Some of which expressed frustration and even shame that a foreigner witnessed such behaviour.

Over time I forgot about the letter, but not the beating.

After I’d returned to Australia, friend and ethnomusicologist Kirsty Gillespie, sent me a message about an art exhibition she had just attended in Canberra. She told me that the exhibition included a piece from Simbu artist Andrew Kayanu: the painting was called ‘Tears for a Defenceless Woman’ and was inspired by the letter I’d written many months prior. The letter was featured in a plaque next to the work.

It turns out a Canberra-based curator gave Andrew a copy of the letter and commissioned him to paint his reaction.

Andrew’s painting, shown above, shows a bent crying woman along with a tree. The curator suggested the emotional pain might be reflected in the sharp pointed tree branches. For me, the naked and pointy tree represents nature’s silent witnessing and admonishment of this act. With nature so central to most Papua New Guinean’s lives, it brings a very Papua New Guinean take on gender-based violence.

I later met with Andrew and we discussed the painting. He said he was shocked by the incident and wanted to capture his feelings of sadness and outrage in his art work.

Thankfully, due to the efforts of a coalition of committed Papua New Guineans and their supporters, awareness about the nature of gender-based violence has grown in PNG. And while responses are still inadequate, more is being done to understand the nature of the problem and mitigate it. This includes efforts from politicians, NGOs and community groups, donors, government and academics. New laws and strategies for addressing the problem have been introduced.

(If you’d like to help, I’m sure that the NGO Femili PNG – which works to support victims of family and sexual violence – would appreciate a donation.)

So, perhaps it is possible to hope that beatings like the one I saw will become rarer over time.

On a personal note, witnessing such violence forever changed my views about gender, power, violence and art. I am no longer a pacifist. And by contemplating Andrew’s painting, I’ve gained a new appreciation for the potential role that art can play in helping to reframe and understand one of PNG’s toughest challenges.