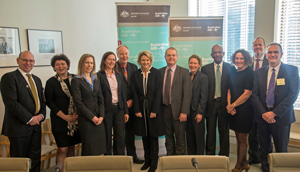 Photo: Ron Mizen / Office of the Minister for International Development

Last month our new Minister for International Development welcomed Save the Children Australia and the Fred Hollows Foundation as ‘Partnership’ agencies under the AusAID NGO Cooperation Program (ANCP). This places them, along with eight existing NGOs, in the highest of three ANCP membership tiers. Membership of the ANCP Partners club now coincides exactly with the current list of the top ten funding recipients under the scheme.

The ANCP supports the core work of over forty accredited Australian international development NGOs. It’s a kind of budget support mechanism for NGOs, though funds are provided within strict guidelines. ANCP funding accounted for 32% of all Australian government aid funding to Australian NGOs in 2011-12, with the rest provided through various special-purpose schemes, usually via competitive allocation. The amount of funding an NGO receives under the ANCP is related to the level of funding it raises from the community—though it’s not a simple matching relationship. The ten ANCP Partners get substantial bonus allocations over and above their basic ANCP funding entitlement in recognition of their greater absorptive capacity. They will account for $106.5 million of the $141 million ANCP budget in 2013-14.

Over the past four years ANCP funding has increased by over 50% and provision was made for it to grow by a further 33% in the 2013-14 budget. Save the Children Australia and the Fred Hollows Foundation particularly benefited from the increase between 2011‑12 and 2012‑13 (see below), reflecting their increasing share in total community donations to NGOs. 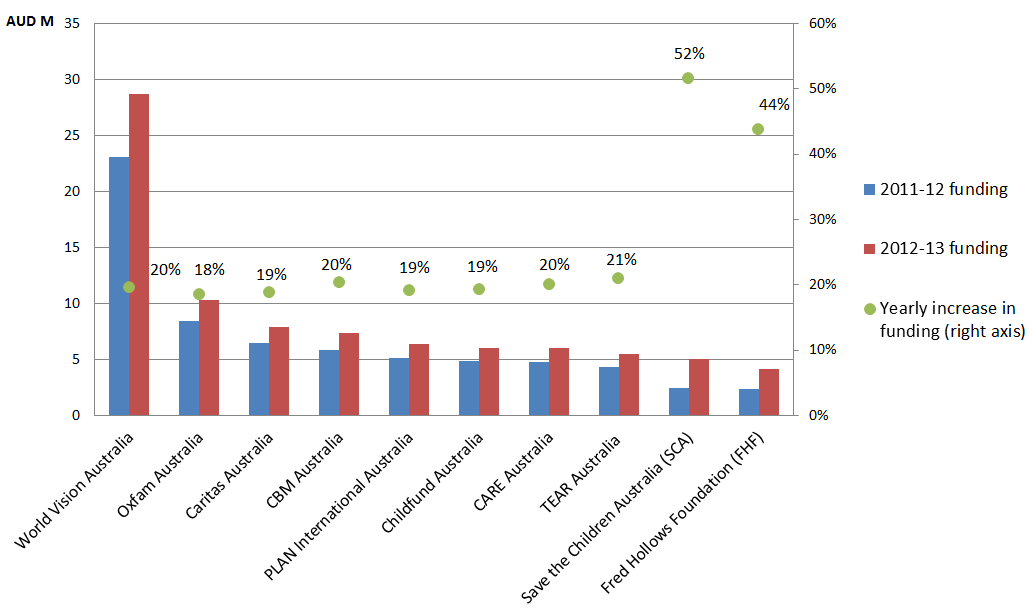 So what do ANCP Partners get out of the deal, besides the bonuses? When the partnerships tier was introduced in 2009, in addition to the existing base accreditation and full accreditation tiers, the idea was to give Partner agencies more funding certainty, more flexibility in the use of the resources provided and also more engagement with AusAID on policy and strategy. The thought was to treat them in much the same way as well-established and institutionally capable multilateral organisations. Accordingly, they were offered four-year funding packages under strategic partnership agreements, and those agreements provided for regular, high-level and broad-ranging consultations between AusAID and Partner agencies.

A mid-term review of the original batch of ANCP Partnership Agreements was completed in 2012. It found that the new approach has ‘considerable potential’, but also that ‘fully realising this potential will require attention to a number of areas’. The areas in question included impact assessment, improved communication, sharing of outcomes and learning and more dedicated resourcing for the partnerships. AusAID agreed to all the findings of the review before it signed new agreements with eight partner organisations last December. The recent welcoming of two new NGOs into the Partners club suggests that this way of supporting the largest NGOs is becoming part of the furniture.

Supporting the big NGOs in broadly this way does make a lot of sense: ANCP beneficiaries are an extremely diverse lot, so the resource allocation processes and administrative procedures that appropriately apply to the smaller organisations will obviously be a poor fit for the biggest. However, the rise of the Partners also raises some questions.

For one thing, what is to be done about the proliferation of small NGOs? Even an expanding ANCP cannot afford to fund every organisation that might in the future qualify for accreditation—and it is unlikely that every such organisation springs into being to fill a genuine vacuum.

For another thing, what are we to make of the present basis for allocating funding to, and among, the Partner agencies, which now seems only tenuously linked to levels of community support? Should AusAID perhaps go all the way with the multilateral analogy and allocate funding on the basis of a rigorous assessment of the relevance and effectiveness of the organisations’ work? As it happens, AusAID is in the process of developing an effectiveness assessment methodology for NGOs, but it is not yet clear what, if anything, this would mean for the allocation of funding under ANCP.

Jonathan Pryke is a Research Officer and Blog Editor at the Development Policy Centre. Robin Davies is Associate Director of the Centre.