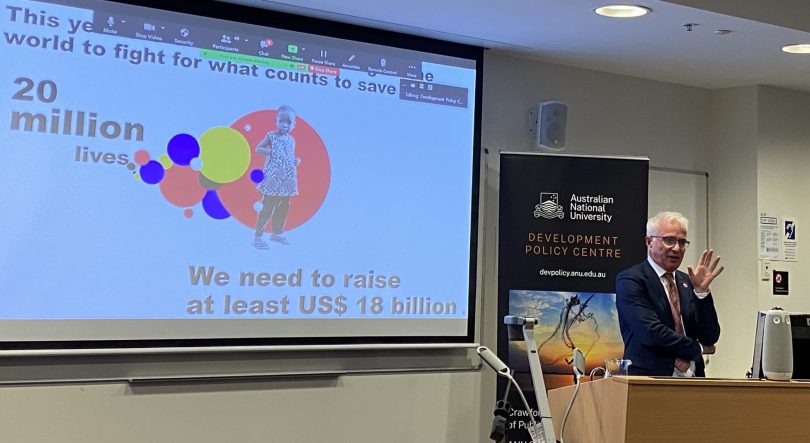 As the Biden Administration in the United States prepares to host the seventh triennial replenishment of The Global Fund to Fight HIV/AIDS, Tuberculosis (TB) and Malaria, the Fund’s leadership and supporters have been making the case to Australian officials and decision makers for a substantially larger contribution from the new Albanese government.

Speaking at the Development Policy Centre yesterday, the Executive Director of The Global Fund, Peter Sands, built this case around three key arguments — the Fund’s proven track record, the devastating secondary health impacts of COVID-19, and the increased funding needed to get the fight against the three diseases back on track, both globally and in Australia’s region.

In terms of its track record, Sands highlighted The Global Fund’s role since its establishment in 2002 in mobilising more than US$53 billion in dedicated finance and, prior to the COVID-19 pandemic, helping reduce mortality across the diseases: by 2020, HIV/AIDS related deaths had fallen by 74%; non-HIV positive TB deaths had fallen by 42%; and malaria deaths had fallen by 47%. The Fund estimates that, since 2002, it has saved 44 million lives globally and almost 18 million lives in the Indo-Pacific, including 140,000 lives in the Pacific. Since 2020, the Global Fund has become the principal global platform to deliver testing, treatment, personal protective equipment (PPE) and health system support for the COVID-19 response across 109 low- and middle-income countries. This has helped avert an estimated 1.5 million deaths.

However, the COVID-19 pandemic has had an enormous negative impact on global HIV/AIDS, TB and malaria prevention and treatment efforts. For the first time in two decades, the Fund has seen a deterioration in outcomes across all three diseases: HIV testing fell by 22% in 2020 compared to 2019 and broader prevention services fell by 11%; one million fewer people were treated for TB in 2020, with the treatment of drug-resistant cases falling by 37%; and malaria deaths rose by more than 12%. And in 2020, in terms of overall mortality, 900,000 more people died of HIV/AIDS, TB and malaria than died of COVID-19.

It is this disruption that underpins The Global Fund’s call for a 30% increase in its three-year replenishment — up from US$14 billion for the 2020-22 period to $18 billion for 2023-25. According to the Fund, this increase is the minimum needed to restore progress against the three diseases and get anywhere close to meeting the 2030 Sustainable Development Goal health targets. The US has signalled that it could provide up to $US6 billion. But due to US legislative restrictions — which limit it to providing no more than one-third of The Global Fund’s budget — this is contingent on other donors coming up with the other $US12 billion.

In order to help meet this funding target, The Global Fund is calling upon Australia to provide A$450 million for the 2023-25 period, an 85% increase on its pledge of A$242 million for 2020-22. Since joining the Fund in 2004, Australia has Australia has pledged a total amount of A$1.07 billion and contributed A$961 million. But, on a per capita basis, Australia currently provides just one-third of the contribution of Canada and one-quarter of the contribution of the UK. And, by leveraging the contributions of much larger official and philanthropic donors, the Fund can arguably provide much more bang for buck than Australia could achieve by going it alone through bilateral support.

In considering The Global Fund’s request, the Albanese government will need to weigh up several important factors. The most important is the tight budget environment and the fact that while Labor did announce increased aid for the Pacific and Southeast Asia during the election campaign, it did not announce any increase in global aid (apart from a small increase for NGO programs). This is despite the fact that calls on global aid are increasing, including in the area of health. For example, the government has already indicated that it will contribute to a new Financial Intermediary Fund (FIF) for pandemics which will be established at the World Bank. This will place further strain on a shrinking overall aid budget.

The second factor is performance and effectiveness. This is harder to assess from an Australian perspective because while the organisation does provide good performance and impact information, DFAT’s latest Multilateral Performance Report does not contain an individual performance rating for The Global Fund. Nor did the Morrison government publish the findings of its 2019 multilateral audit, which presumably included an assessment of the Fund.

The final factor is geographic focus. While The Global Fund has committed increased resources to the Indo-Pacific (East Asia, South Asia and the Pacific) and signalled a bigger focus on TB in the region, more than 75% of its current funding goes to Sub-Saharan Africa, where disease burdens are generally highest. In this sense, the September Global Fund replenishment will be an important test of whether the Albanese government, which does seem more sympathetic to multilateral aid, has a wider conception of its interests and obligations than its predecessor.

Listen to the recording of Peter Sands’ address at the Development Policy Centre and view the presentation.