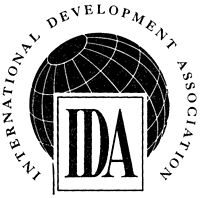 On 17 December the World Bank announced that it had concluded negotiations for a $US 52 billion replenishment of the World Bank’s fund for the poorest countries, the International Development Association (IDA). The new funding will back concessional loan and grant commitments to be made over the next three years. This seventeenth IDA replenishment (IDA17) is about $US 3 billion bigger than the previous one (IDA16, concluded in late 2010) which leaves funding broadly flat in real terms.

So how generous was Australia this time around? Surprisingly, in the new world of aid transparency, the World Bank will not be releasing details of the replenishment until March. (One has to wonder how they can announce the total size of the replenishment if they are not in a position to detail its components.) The Australian Government hasn’t made an announcement either. So we asked DFAT, and were informed (via the statement at the end of this post) that Australia’s contribution is expected to amount to $735 million or so. That is $95 million less than the amount Australia gave IDA for the last three years, which was $830.5 million.

The reduction brings to an end a series of extraordinary increases in Australian support for IDA, first under Howard and then under Rudd and Gillard, as the graph below illustrates (see the notes below for sources and assumptions). 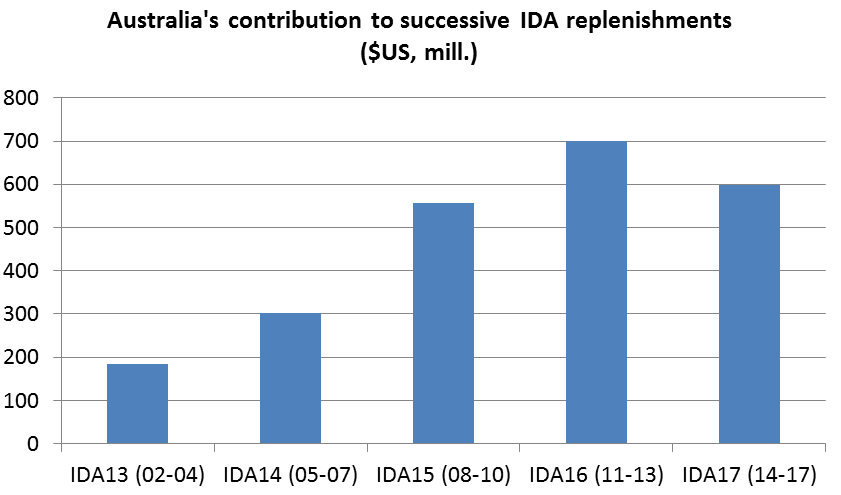 How did the cut come about? A forbiddingly complex set of calculations are involved in IDA replenishments, but the bottom line is that last time (in IDA16) we made a $100 million “supplemental” or one-off contribution, on top of our normal contribution to IDA, which we are not making this time.

The Government will defend the decision by saying that our “burden share” in IDA17 is unchanged at 1.8% (as DFAT informed us through their statement). It is true that Australia’s IDA burden share was increased under Rudd from 1.46% to 1.8% (in December 2007 as part of IDA15), and that the Government could have made things worse for IDA if it had reverted to a lower share. At the same time, IDA burden shares are rather limited as measures of donor effort: several donors make additional contributions, such as Australia’s $100 million last time. And, oddly, there is no requirement that these shares add to 100%. (In IDA16, they summed to about 75%! We don’t know what they add to for IDA17.)

A simpler and more holistic way to judge Australia’s contribution is to look at our overall IDA share: how much we give divided by the total raised. In the last replenishment, our share was 1.40%. This time round, our estimate of Australia’s share is 1.26%. These estimates are subject to certain caveats (for which see the notes), but it is roughly a 10% reduction in overall share.

So why the cut? Australia wasn’t the only country that reduced funding relative to IDA16. Full details aren’t available but sometraditional donors seem to have given less, while other traditional and some emerging donors have provided more.

The Coalition signalled before the election that it was going to be less multilateral than Labor. Given this, and the end of the scale-up in aid, the outcome is not that surprising. But note that, also late last year, the Global Fund, though denied an increase by Australia, escaped a cut in its latest replenishment round.

It is not clear why the World Bank was singled out for a cut, especially given its focus on economic development, a key priority for the Coalition. Probably the reason is simply that the “supplemental” contribution of three years ago was an easy target. But that is hardly a satisfactory rationale.

The World Bank, of which IDA is an integral part, was recently rated by the 2012 Australian Multilateral Assessment as one of 13 out of 42 multilateral organisations in relation to which Australia could have confidence “that increases in core funding will deliver tangible development benefits in line with Australia’s development objectives, and that the investment will represent good value for money.” The Global Fund was not in this exclusive list.

On the one hand, the cut to IDA is relatively small, at least when placed in historical context. On the other, the Multilateral Assessment doesn’t seem to be serving the purpose for which it was introduced; namely to provide an objective basis for multilateral funding decisions.

The DFAT statement in full reads:

“On 17 December 2013, Australia pledged to maintain its burden share to the seventeenth replenishment of the World Bank’s concessional lending arm, the International Development Association (IDA17).

Consistent with our earlier contribution to IDA16, our burden share will be 1.80 per cent for contributions to IDA loans and grants, and 1.61 per cent for IDA’s debt relief initiatives. Australia will also meet its expected obligations for the Multilateral Debt Relief Initiative.

How this pledge equates in dollar terms remains subject to confirmation by the World Bank, but is expected to be in the order of $735 million.”