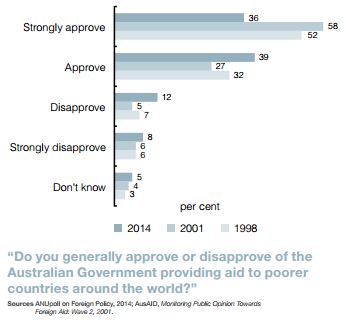 There is broad public support for foreign aid, according to the latest ANU Poll, and the public clearly prefers aid be primarily given for humanitarian rather than commercial or political purposes.

The poll, released today, had a focus on foreign policy and asked two questions on foreign aid.

The first asked whether respondents generally approved or disapproved of Australian government aid.

The report concludes that there “has been some weakening in public support for foreign aid, both in absolute terms and in the strength of the commitment”, but that overall support for aid remains high.

The second question touched on the motivations for Australia in giving aid, and is particularly relevant given the government’s push on economic diplomacy and aid-for-trade. 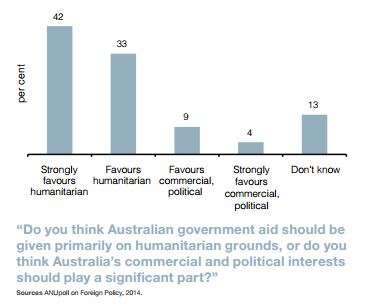 As you can see from the chart above, there was strong preference for aid to be given primarily on humanitarian grounds rather than in line with commercial and political interests, with 75 per cent of respondents favouring it. This correlates closely with the results in the most recent Lowy Poll, which showed 75 per cent of Australians think poverty reduction is the most important objective of the aid program, and also with the findings of our 2013 Australian aid stakeholder survey, which showed that aid experts think poverty reduction should receive more weight than it does in the aid program.

Other questions in the poll touched on Australians’ views on multilateral organisations, relations with the US, China and Indonesia, and political mood. You can read the full report here.