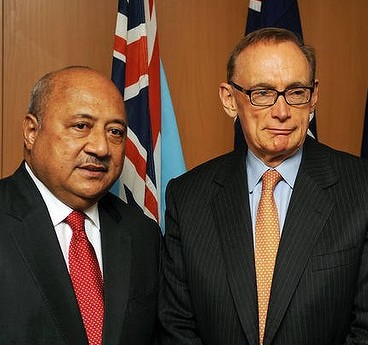 If you go to the DFAT website to look at the sanctions Australia imposes on Fiji because of its military rule, you will conclude that they relate to military assistance and personal travel.

You wouldn’t guess from that website, and you won’t find it from any other official one, that another sanction which Australia imposes on Fiji is that we, together with New Zealand, prevent the Asian Development Bank and the World Bank lending to Fiji.

How do we know this? We certainly know that neither institution has engaged in new lending since the 2006 coup (except for an emergency response following the 2009 floods). See for example here for a statement to this effect by the ADB. This itself is telling, because elsewhere in the Pacific these two institutions have been scaling up, at Australia’s urging. Both Banks are engaged in various other activities in Fiji, such as private-sector lending and the provision of technical assistance. It’s not a complete ban, but a ban on lending to the Fiji government.

How do we know that this ban on lending to the Fiji government is driven by Australia and New Zealand? It certainly isn’t something that is advertised by either country. To the contrary, the AusAID country strategy for Fiji talks about working “in close partnership” with the ADB and the World Bank.

But the public record tells a different story. One press article reports on a 2011 meeting of the Fijian leader Commodore Voreqe Bainimarama with then ADB President Kuroda requesting re-engagement and funding. According to the report, Kuroda responded, with impeccable politeness,  “that there were some hurdles to the prospects of re-engagement, including the situation in Fiji.”  “[A]ny assistance from the ADB would be limited to technical assistance.”

Clearly, what Kuroda meant was that some countries would object if the ADB lent to Fiji. Given the leading role that they have played in opposing the coup, it stands to reason that the countries concerned (the “hurdles”) are Australia and New Zealand. No-one in Australia would confirm or deny it to me on the record, but off-the-record sources corroborate that these two countries have indeed been preventing lending from the World Bank and the ADB to Fiji.

Whether it is a good policy or not, it is unfortunate that it has not been made public. Indeed, very few seem to be aware of it. The Lowy Institute has run a campaign to lift sanctions against Fiji. It never mentions the ban on Bank lending. Article IV, Section 10 of the World Bank’s Article of Agreements  instructs the Bank not to “be influenced in their decisions by the political character of the member” country concerned. The ADB’s Articles are similarly worded.  If Australia wants the World Bank and the ADB to violate their own constitutions it should come out and defend this policy in public.

Is it a good policy? I don’t think so. The World Bank and the ADB provide loans to many other countries run by dictators. Some of these countries are successful in development terms (China and Vietnam), some less so (Pakistan, from time to time). I wouldn’t say that WB-ADB sanctions are never justified, but I see no basis for continuing with these sanctions.

I want to clarify that I am not a supporter of the Fijian Bainimarama dictatorship. To the contrary, I support the sanctions which the Australian Government has announced. But I don’t see the rationale for a ban on WB and ADB lending. Better in my view to have these institutions active in Fiji trying to promote economic reform and development, including through sound lending.

The ban also seems hypocritical. After all, Australia is increasing its aid to Fiji. In fact, we’ve doubled it since the coup, from $29 million in 2007–08 to $58 million in 2013–14. We’re supporting Fijian government schools and hospitals. But we won’t let the ADB and the World Bank provide resources to the Fijian government.

Some are worried about Fiji turning to China. If you are, that’s another reason for letting the WB and ADB operate in Fiji. The WB-supported hydropower project that was under preparation at the time of the coup is now being implemented with a loan from China.

Most importantly, in my view, there is an international cost to getting the World Bank and the ADB to impose sanctions on our behalf. It reinforces the impression that these organizations are the instruments of rich countries, rather than problem-solving tools for all countries. In this regard, the two multilateral institutions have a case to answer, as well as Australia.

Others might disagree. Some pro-democracy supporters in Fiji might virulently disagree. It would be a good debate to have. But I for one question the wisdom of secretly barring the World Bank and the ADB from lending to Fiji.

Jenny Hayward-Jones of the Lowy Institute didn’t mention the ban on World Bank and ADB lending to Fiji in her 2011 report “Policy overboard: Australia’s increasingly costly drift” which is the one I checked and referenced in the article above, but she did, quite clearly, in her 2009 report “Fiji: the flailing state”, where she wrote: “The Australian government will need to relax its principled opposition to lending by international financial institutions to Fiji.”

My  apologies to Jenny and readers for missing this. The lack of response from the Australian Government is sobering given that the issue was first raised as long ago as 2009.