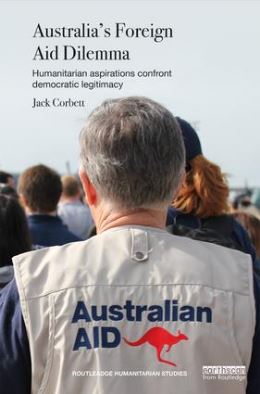 The Australian aid program faces a fundamental dilemma: how, in the absence of deep popular support, should it generate the political legitimacy required to safeguard its budget and administering institution?

My recently published book Australia’s Foreign Aid Dilemma: Humanitarian Aspirations Confront Democratic Legitimacy (Routledge, 2017) tells the story of the actors who have grappled with this dilemma over 40 years. It draws on more than 50 in-depth interviews with key decision-makers as well as extensive archival research. This post provides a summary of what I found.

The book has two parts. Part One incorporates six chapters that chart the history of the aid program and its administering institution. They tell the story of aid and its fluctuating fortunes under successive governments or ministerial ‘courts’.

The Whitlam government led the first wholesale reorganisation of Australian aid by establishing the Australian Development Assistance Agency (ADAA) as a statutory agency in 1974. As a result, they are remembered as aid’s first true champion despite the fact that they cut the budget to a newly independent Papua New Guinea in 1975.

The Fraser government emerges with a more mixed record. They abolished ADAA in 1976 and initially cut the budget, but later, in the early 1980s, they established the Australian Centre for International Agricultural Research and the Development Import Finance Facility (DIFF).

The Hawke–Keating governments acted on the ‘Jackson Review’ – the first public root-and-branch review of the aid program – and, in doing so, returned some of the administrative autonomy lost during the Fraser years. They delivered substantial aid cuts during the late 1980s but later grew the program and renamed it AusAID.

On coming to office in 1996, the Howard government cut aid, abolished DIFF and emphasised governance during an interventionist phase in Australian foreign policy. In 2005, they committed to doubling the aid budget by 2010, a move that catapulted Indonesia to the forefront of Australia’s aid effort.

Rudd came to office in 2007 with a promise to reach the Howard scale-up in 2010 and then double the program again by 2015. He also reoriented the program towards social sectors, emphasised the MDGs, and increased the status of AusAID by making it an executive agency in 2010. Of all the prime ministers and foreign ministers responsible for aid over the last four decades, Rudd had perhaps the greatest interest and vision for the program. However, the belief among certain politicians and administrators that aid had benefitted unduly from his patronage meant that it became a symbol of the worst excesses of his government.

In reaction, the Abbott government cut aid and abolished AusAID in 2013. In doing so, Abbott effectively returned the program to a pre-Whitlam era in which it was a much smaller part of government.

There are a number of lessons we can draw from this brief summary, including:

While the personalities and preferences of prime ministerial and ministerial ‘courts’ are key to explaining the fluctuating fortunes of Australian aid, there are patterns in the way that each has sought to win legitimacy for the program across the decades. Indeed, in the absence of democratic legitimacy (deep public support), the perpetual dilemma for those who believe in the purpose and value of an Australian government aid program is how to generate other types of legitimacy for the aid budget and its administering institution.

In Part Two of the book I argue that ministers and bureaucrats have typically sought to realise three types of legitimacy: policy, technical and administrative.

Policy legitimacy stems from the fact that aid is a multifaceted policy tool that serves multiple objectives, simultaneously. The problem here is that while this inherent usefulness can safeguard the budget, it also leaves the program open to criticism on the grounds that it has been distorted from its core purpose. As a result, new governments typically attempt to clarify, truncate or reimagine the policy objective but later relax this stance, and grow the budget, the longer they are in office.

Technical legitimacy stems from the claim that aid policy is complex and requires expert knowledge to deliver well. The issue here is that while appeals to professionalism have helped legitimise the aid program and a separate aid agency for much of the last four decades, they also heighten concern that an international community of practice has captured both. This anxiety tends to increase when the Australian foreign policy community perceives the program and its administering institution to have grown too large.

Administrative legitimacy stems from the need to protect the minister and the government of the day from unnecessary risk by ensuring coherence in policy development and program delivery. The problem is that there are competing versions of coherence – one externally facing on a coherent foreign policy and one internally focused on coherent program delivery – that pull the program and its administering institution in opposite directions. When ministers and prime ministers have been comfortable with this inherent tension – the coherence of incoherence – the program enjoys administrative legitimacy.

In the absence of a strong public constituency, history shows that each form of legitimacy is incredibly difficult to realise and maintain. Successfully balancing all three over a long period of time has proven virtually impossible. The consequence is that the Australian aid program and its administering institution have been subjected to a perpetually tenuous existence. The overarching lesson for both scholars and practitioners is that any holistic understanding of the development enterprise must account for the complex relationship between the aid policy of the individual government and the domestic political and bureaucratic context in which it is embedded. If the way funding is administered shapes development outcomes, then understanding the ‘court politics’ of aid matters.

The research for this book was made possible by the financial support of the Australia National University’s Development Policy Centre and the Centre for Governance and Public Policy, Griffith University. The usual caveats about the author being solely responsible for the content apply.

You can purchase a hardback or electronic copy of Australia’s Foreign Aid Dilemma: Humanitarian Aspirations Confront Democratic Legitimacy, here. There is a 20% discount available if you enter the code FLR40 at checkout.