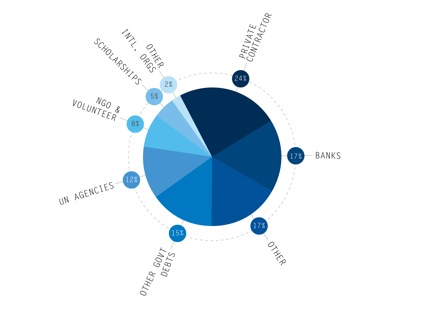 Moreover the proportional significance of the banks in the aid program is only likely to grow as the aid budget swells. The Independent Review of Aid Effectiveness has recommended a rapid doubling or trebling of core funding to both the World Bank and ADB, and it furthermore recommended that Australia join the African Development Bank.

Despite this, there has been surprisingly little debate or discussion about the role of the multilateral development banks in Australia’s aid program, and indeed there is a lack of data that clearly describes this role. It is for these two reasons – the lack of clear data and the lack of debate – that Manna Gum and Oxfam Australia have produced a new report –  Banking on Aid: An examination of the delivery of Australian aid through the World Bank and Asian Development Bank – being launched at a forum with the Development Policy Centre on October 27. Below I will summarise a few of the key bits of the report.

The published data that is available on Australian contributions to the banks over the last decade is patchy, incomplete, and often inconsistent. However, it is not just the public that has lacked quality data; AusAID itself has struggled to know the full picture. The Multilateral Study of the Independent Review of Aid Effectiveness observed: “It is very difficult if not impossible to interrogate the system to extract information on the entirety of funding” (p.39).

Figure 1: Australian core and non-core contributions to the banks 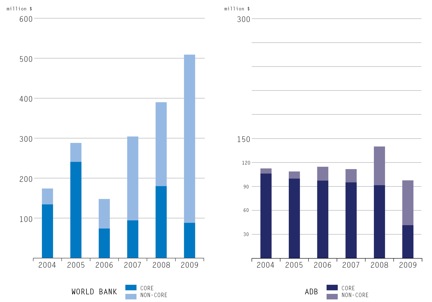 When measured as a proportion of the aid program, the trend of Australia’s contributions to the banks has remained relatively stable (averaging around 15%), slightly increasing over the decade (see Figure 2 below). Other than AusAID-managed contractors, this makes the banks the largest channel of Australian aid (see Figure 3). Moreover, while earmarked funding has led the charge in Australia’s payments to the banks, core contributions will start to catch up soon, with historic increases in the most recent replenishments of IDA and ADF (the concessionary credit arms of the World Bank and ADB).

Figure 2: The banks vs UN agencies as a proportion of Australian ODA 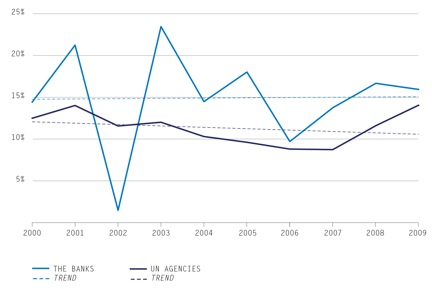 All this is to say that Australian contributions to the banks form a major part of the Australian aid program and they are set to grow further.

So what? These two institutions have a broad international mandate to deliver development assistance, they have an over-arching purpose to reduce poverty, they espouse a commitment to achieving the millennium development goals, and they are widely considered to be ‘effective’ and ‘efficient’ deliverers of aid.

But as well all know, delivering aid which really benefits the poor is not that straight forward. For well over two decades there has been a raging debate about the effect of the World Bank’s lending on poor people, and a similar debate about the ADB has been going for the last decade and a half. Those who are supportive of the banks have the dominant voice in this debate and tend to assume a modus operandi that ignores the existence of a debate at all. Nevertheless, the case against the banks is voluminous and the allegations grave.

Perhaps one way of summarising the debate over the banks is by saying that proponents tend to focus on the technical aspects of aid while critics tend to focus on the political economy of aid (you can see Section 2 of Banking on Aid for an overview of the debate). Proponents, speaking largely from the aid effectiveness consensus of the Paris Declaration and Accra Agenda, point to the major role the banks play in aid harmonisation and coordination, in absorbing rising aid volumes, and the higher levels of aid which they distribute to low income countries. By the same token, the scale and influence of the banks, plus their use of ‘results measurement systems’, means that they are widely considered to be efficient and effective deliverers of aid. Finally, proponents point out that the banks, of all aid institutions, are the most well equipped to assist economic growth in the developing world.

For critics, it is precisely the banks’ role in attempting to catalyse growth which is a major concern. Perhaps the most widespread complaint about the banks – including from within the banks themselves – is the extent of their ideological tunnel vision, and the ways in which this has shaped nearly all areas of the banks’ work, from research through to lending. In 2006 an external evaluation commissioned by the World Bank of its research found that the Bank had used its highly publicised research on globalisation, growth, aid and poverty (used extensively in Australian aid policy) “to proselytize on behalf of Bank policy, often without taking a balanced view of the evidence” and that “much of this line of research appears to have such deep flaws that, at present, the results cannot be regarded as remotely reliable” (pp. 6, 53 [pdf]). There are many who argue that this tunnel vision has led the banks to promote policies – particularly in the areas of trade policy, agriculture, land, privatisation and resource exploitation – which have at times worsened the conditions of poverty in the developing world.

There is no doubt that the proponents hold the ascendancy. However, the criticism has been sustained and widespread. At a time when the banks are receiving unprecedented levels of funding from the Australian aid program, perhaps we should be giving this debate a little more attention.