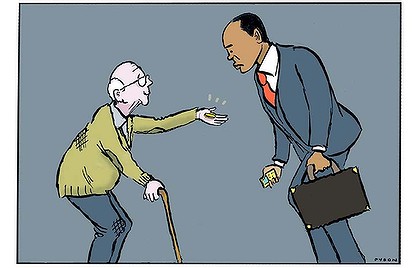 So which matters more – individual wealth or aggregate national wealth?  Of course it depends on what we are trying to measure.  Per capita GDP is more important when we are measuring individual welfare, and of course that counts.  But national wealth is important when we are interested in the capacity of a country to achieve national goals.  In my line of work – defence – it is important as a measure of the country’s capacity to build armed forces. But is also helps us understand a country’s capacity to fund other national priorities – including, for example, education.

My piece in The Age a couple of weeks ago that prompted Stephen’s reply mentioned the Indonesia school program.  My point was that Indonesia is wealthy enough as a country to build schools for itself, so out funding for schools simply diverts Indonesia’s own spending to another, presumably lower, priority.

More deeply, I think the point about relative levels of national wealth is important in the way Australia sees itself in relation to our neighbours.  I think most Australians still see Australia as a rich country surrounded by poor countries – and as a strong country surrounded by weak countries.  It has always been that way.  Now that is changing.  The shift in relative economic weight and therefore national power away from us and towards our neighbours is a major change in our national situation which we are reluctant to face.

That is not to say that Indonesia becomes threatening, but it is to say that we have to start taking it a lot more seriously.  We need to stop seeing it as a country notable mostly for its poverty, and stop seeing our relationship to it primarily as that of a rich donor helping a poor neighbour – as an object of our charity.  We need to start seeing it as a country notable for its strength, and relate to it as an important partner in regional affairs.