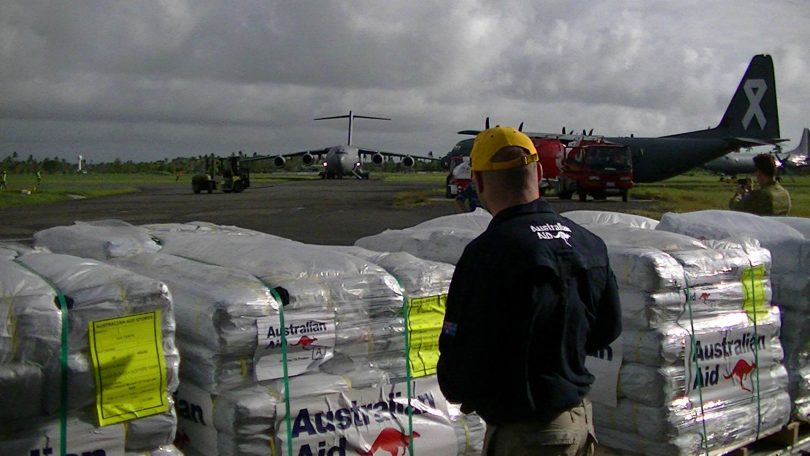 Humanitarian supplies being loaded for transport to Koro island (DFAT/Flickr/CC-BY-2.0)

As someone who is still in the early stages of self-education about Australian politics and political history, this book has helped fill in some very significant gaps in my knowledge. It has answered some key questions and raised others.

Corbett’s central thesis is that the varied trajectory of Australian aid policy and practice is explained by politics and very little else. Building on that he presents the concept of ‘court politics’ as the paradigm in which the history of aid in Australia must be based if we are to understand its past and present. Whether it helps us predict or even influence its future remains open to question.

One of the most useful things this book does is provide a very clear and thought provoking history of the aid program in Australia over an extended period of time. The author identifies key events and influencers from the post-war period up until the current day. Although the book was published after the merger of AusAID and DFAT during the period of the Abbott government, this does not receive a great deal of attention, given that it was too soon to assess the impact of this development at the time of publication. In addition, Corbett’s chronology is helpful in putting this development into context alongside other (equally or possibly more) significant occurrences such as the establishment of the Australian Development Assistance Agency (ADAA) by the Whitlam government in 1974 or the abolition of the Development Import Finance Facility (DIFF) during the Howard government era.

Corbett rightly identifies that the lack of political investment in Australian aid policy and practice is a reflection of ‘shallow public support’. He posits that the ramification of this is that the major drivers of how Australian aid has or has not developed are located within the realms of executive discretion. He points to and illustrates attempts to enhance the significance of the aid program by seeking to establish one or more of: policy legitimacy, technical legitimacy, or administrative legitimacy. He defines policy legitimacy as stemming from ‘the alignment of the agencies’ capabilities with the priorities of key stakeholders’ (p.7). In this context, this refers to demonstrating that the use of aid supports Australia’s vision of itself as an international actor. Technical legitimacy derives from how valuable key stakeholders consider the expertise of agencies to be. This indicates a growth in professionalism and technical expertise, drawing on global best practice, academic research and the influences of relevant NGOs. However, it is not without risk:

The problem is that while the complexity of aid underscores the need for professionalism, it leaves the program and its administering organisation open to the criticism that they have been captured by an international community of practice (p.7).

Administrative legitimacy refers to an approach that is focused on protecting the minister and government of the day by attempting to maintain both external coherence (harmonisation of the aid program with other government functions and agencies) and internal coherence (delivering programs effectively and efficiently).

The author has drawn on a range of sources, including cabinet papers, records of parliamentary proceedings, and interviews with some of the people who were and are at the tables where key decisions are made about the aid program. There is a wealth of detail here, and it is presented in a way that makes the book a real page turner (yes, I found that surprising as well!) Even without a professional or academic interest in aid policy and practice, the machinations that Corbett presents are satisfying, purely from the point of view of how political capital is accumulated and deployed to varying effects.

The tone of this volume is very engaging and there are lots of interesting comments from politicians and public servants interspersed in the text. Corbett has obviously done a very good job of gaining access to very senior people and earning the trust of those who have spoken frankly, often on the condition of anonymity.

This book does a very good job of stating in clear terms that politics is at the heart of how aid policy and practice is developed. And unless those who seek to influence it understand and accept that, their efforts to prevent budgets being cut, or get aid directed to one thing rather than another, will largely be in vain. So if the arguments that Corbett has put forward here go some way to entrenching a sense of political realism in the ‘development community’ (whatever that is), this will be a valuable achievement.

As someone who understands this quite well, my overall reaction to this book is one of frustration. I feel better informed than before I read this book, but it hasn’t given me any indication of how I can or should put this knowledge to good effect. In fact, worse than that, it has left me feeling that it doesn’t matter how much I know, there is precious little that can be done from the ‘outside’ of these processes. Which leaves one in the frustrating position of hoping (sometimes against hope) that those who are on the ‘inside’ will form a court that can be relied upon to do the right thing (however that might be defined).

Perhaps more usefully, Corbett’s analysis provides a reality check for those who are called upon to examine and critique Australia’s aid program. In the epilogue of the book, the author notes:

The lesson for both scholars and practitioners is that any holistic understanding of the development enterprise must account for the complex relationship between the aid policy of the individual government and the domestic political and bureaucratic context in which it is embedded (p.207).

Perhaps the final lesson that Corbett’s analysis provides is that wherever actors and influencers may sit, the reality of how Australian aid has been delivered in the past, and is likely to be in the future, understanding it requires a healthy dose of political realism.

The Canberra launch of this book was hosted by Devpolicy in August 2017. You can listen to the podcast of the event here, or read Jack’s blog on his book here.