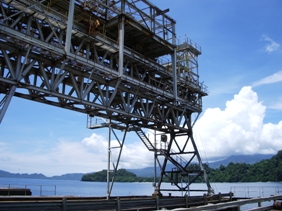 A series of explosions from 25th to 27th November 1988 brought several power pylons to the ground and with it the giant Bougainville Copper Limited (BCL), a gold and copper mine located at Panguna in Central Bougainville.  BCL suspended operations as security deteriorated and was forced to close operations indefinitely six months later.  The mine remains closed.

The causes of the conflict on Bougainville are complex.  What is clear, however, is that the ten years of fighting that followed the first explosions left the economy in tatters and the people traumatised.  Bougainville in this period fell from being the top performers on socio-economic indicators of the 20 provinces in PNG to the bottom.

The North Solomons Province that now is the autonomous region of Bougainville had the second highest income per person as of 1983; beaten only by the National Capital District.  Pre-conflict Bougainville hosted the largest mine in the country.  The province led its peers in terms of cocoa and copra production.  The people were re-known for peace and hospitality.  But once caught in the vicious circle of fighting and economic decline, entire communities got ravaged.

An end to fighting was reached with the help of international assistance ten years on.  Central Bougainville remains restricted to the majority of outsiders.  The economy, however, is recovering. Normalcy is returning.  Bougainville is bouncing back.  This is the good news story for the year.  And the good news has lessons for many in and beyond the region.

I spent a week last month in beautiful Bougainville.  Despite the devastation of war, Bougainville is an extremely hospitable place to visit.  The people are nice, the food great, and the scenery simply breathtaking.  It is not paradise – not yet.  But the potential is there.  The challenge for the President and his administration is in realising this potential.

Bougainville won autonomy from Port Moresby to run all of its affairs except defence and foreign affairs.  The Autonomous Bougainville Government now has the tasks of rehabilitating the infrastructure, restoring access to basic services, and reviving trust of its people in their government.  None of the above are easily achieved.   And resources at their disposal are limited.  Some serious thinking would have to be done in prioritising public expenditure.  I lend a few thoughts on the above here.

Pre-conflict Bougainville was the largest producer of cocoa 9and copra) in PNG.  Production plummeted as the conflict intensified.  The plantations were abandoned during the height of the conflict.

Farmers are back on their plantations now.  Cocoa planting is expanding.  I spent a day with James Rutana and his family on their recently acquired cocoa plantation in North Bougainville.  AJ, his young grandson of Fijian heritage, was quick to accept me as part of the family and showed me around.  While the senior Rutana filled me on the basic facts of his farm, the Fijian (junior) Rutana furnished the intricate details of the operation.  Their plantation extends over one hundred hectares, has a gross turnover in excess of one million Kina, it provides employment to the local villagers, and the farm has fermenting bins large enough to that take up to 5 tons of cocoa beans at any one time.  This is a massive operation.  A four-wheel drive tractor and a Toyota land Cruiser do much of the heavy lifting and carting.  Other equipment surrounds the homestead.

The farm is complete with a nursery.  The Rutanas have a full scale hybridisation program.  The results of these investments are already bearing their initial fruits.  AJ, by all counts, is a superb communicator and a fabulous Fijian.  While still a child, his knowledge and passion for cocoa growing are well beyond his age.  And his grandfather is the best mentor AJ could have ever hoped for.  Both of them now are wrestling with the cocoa pod borer; a menacing threat to the expansion of production.

This farm, while just six years old, is tangible evidence of Bougainville bouncing back.  The Rutanas provide hundred of jobs to people from the surrounding villages, and support many more indirectly.  James is a model farmer, and eager to share his knowledge with the community.  He is supplying seedlings to other growers, has lent space on his farm for cocoa research, and is willing to host aspiring growers on the farm to let them learn the ropes of the trade.  The government in Buka has a ready hand to help them in the revival of cocoa production on Bougainville.

Considerable expense is likely to go to the restoration of roads and ports.  The province is the domain of four wheel drives, and Toyota Land Cruisers particularly.  I discovered, to my discomfort, that just a day long bone-jarring journey on the back of a Land Cruiser has its tolls on the vehicle and their passengers.

At least half a dozen wet-crossings are made on a four hour journey from Arawa to Buka.  And wet crossings with pot-holes are the norm for road travel on the island.  Wet weather makes many of these roads impassable, even for four-wheel drive vehicles.  Fixing them to all weather roads will require considerable effort and expense.

Most schools and healthcare centres that were closed during the conflict are now open.  But more may have to be built.  The population, according to the Census of 2000, was 175,000.  Current population, assuming an annual growth rate of 2.5 percent, would have increased by  30 percent.  All of the additions would be young and ready to attend school and draw on healthcare services.  Thus, school places would have to expand to ensure that literacy rates improve.

The schools and health centres/aid posts will require professional staff.  The University of Papua New Guinea has an open campus in Buka, but may have to expand its offerings of courses and reach of its services further down south and onto the mainland.

Tourism has potential.  World War II relics litter the landscape.  Memories of the War remain fresh in Australia, Japan, and the United States of America – major source destination for tourists to the pacific island region.  A new group of Japanese tourists were arriving the day I departed.

Tourism has the potential to become a significant source of exports and employment.  Realising the above requires better transportation links and more competitive pricing of air and ground travel.  Costs of and access to mobile telephony in Bougainville is exceptional, but the case for air transportation the very opposite.  As an example, air fares from Port Moresby to Buka are higher than that from Canberra to Port Moresby.  Seats on the flight to Buka have to be booked at least a week in advance.  And incidentally, my suitcase is still to arrive on its return journey from Buka on Air Niugini.

Many in Bougainville are already debating the recommencement of large scale mining.  A number of residents told me that the reopening of the Panguna mine is only a matter of time.  Small scale alluvial mining is already booming.  I visited one smelter; run from a steel shipping container with the most rudimentary equipment.  This operation I was told was smelting anything between 1.5 kilograms to 2 kilograms of gold per week.  At current price of US$43 per gram, this converts to US$64,500 to $86,000 of production per week.

Mining is an attractive as a source of income for the people and the Autonomous Government of Bougainville.  Considerable care would have to be taken in restarting the Panguna mine.  Disputes on the distribution of proceeds from the mine triggered the conflict.  The people now know the costs of conflict, thus are in apposition to weigh the net benefits of restarting large scale mining.

A large mine will impact on the economy as a whole.  It will draw labour and capital from the non-mining sectors of the economy.  Cocoa, copra, and food production are all likely to fall as a consequence.  A large mine will create many skilled jobs, and possibly more than the skilled population of Bougainville.  This will put upward pressure on wages and to the inflow of workers from outside of Bougainville.

The challenges for policymaking

President John Momis and his administration are cognisant of the challenges they face.  Policymakers are busy building infrastructure and restoring services to the people.  An entourage of 34 officials led by the President returned from the People’s Republic of China last month.  The president reported of having entered seven memorandums of understandings with the PRC on issues, listed in the order of priority, from:

The items on President’s list make much sense.  I would, however, place mining lower down my own list of priorities, and for reasons noted above.  Furthermore, I would add land reform high up on the list of priorities – a reform that must be led from within Bougainville if it is to succeed.  Long term and secure access to land is critical to the realisation of the top five priorities of the President.