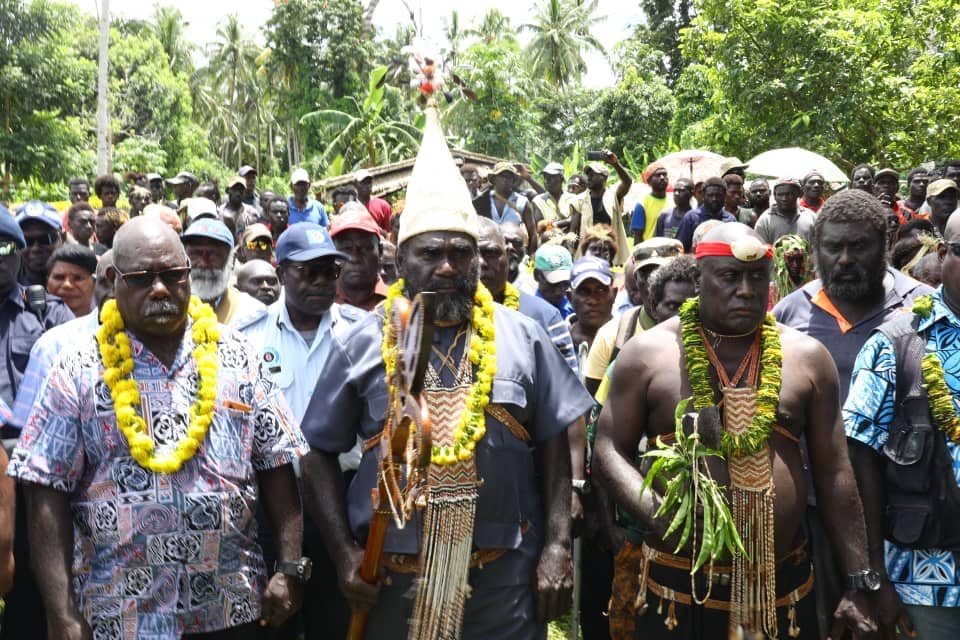 This is the first of a three-part series on the record of Ishmael Toroama, elected President of the Autonomous Region of Bougainville (hereinafter Bougainville) in September 2020. Toroama is little known outside Bougainville. The limited publicly available information about him emphasises his roles as a prominent fighting leader, of fearsome reputation, with the Bougainville Revolutionary Army (BRA) and as a BRA representative in the signing of the 2001 Bougainville Peace Agreement (BPA). Since the Autonomous Bougainville Government (ABG) was established in mid-2005, he has often been discussed in Bougainville as being a ‘warlord’, and one external commentator even described him as a ‘street gang’ leader.

These three posts seek to address the gap in knowledge about him so that a more considered assessment can be made.

This first post outlines Toroama’s origins and then his little-known but remarkably consistent record as a peacebuilder in Bougainville. The second surveys his roles since the establishment of the ABG, first in business activities and second in music. The final discusses his candidature in four elections in Bougainville from 2010 and the factors involved in his success in the 2020 presidential election. It concludes with a brief discussion of how his varied experience equips him for his new role as president.

Parts of the discussion draw upon observations possible through the author’s participation as an adviser in Bougainville peace efforts from October 1994 as well as information from former senior BRA commanders associated with Toroama, during both the conflict and the peace process, who prefer not to be identified as sources.[1]

Toroama was born in 1969 in Roreinang village in the rugged and still quite remote Kongara area of central Bougainville, not far to the southeast of the Panguna mine. Kongara is part of the Nasioi language and culture area. Roreinang is a strong United Church (formerly Methodist) area of influence and Toroama not only comes from a deeply religious family but has maintained a deep religious commitment all his life (he is often described as a ‘born-again Christian’).

He was about 19 when the Bougainville conflict began and he joined the BRA fighters at an early stage in the conflict. As Papua New Guinea (PNG) security force action against the nascent BRA intensified in the first half of 1989, Panguna landowner and BRA leader Francis Ona based himself in Kongara. Already recognised as a brave and effective fighter, Toroama became a bodyguard to Ona. By early 1990 he had his own strong following of young BRA fighters, a unit that operated with some autonomy under the loosely structured BRA. By the mid-1990s he was regarded within the BRA as perhaps the most highly respected fighting leader. He was seriously injured in clashes with the PNG Defence Force on two occasions, needing significant medical interventions in Honiara, Solomon Islands. As a result he has serious scarring to one of his arms and his neck, factors which combined with his relative size and strong physique and his quite reserved nature make him an imposing figure.

After the March 1990 departure from Bougainville of PNG security forces under a ceasefire, some of the disparate BRA elements behaved in an undisciplined manner. Assaults and looting were common. North Solomons Provincial Government (NSPG) officers were targeted as PNG agents. Toroama, aged about 21, intervened to prevent mistreatment of at least one senior officer not previously known or linked to him.

In October 1994, a pan-Bougainville peace conference was held in the main Bougainville town, Arawa. Although conference arrangements had been negotiated between then PNG prime minister Sir Julius Chan and the BRA senior leader (Chief of Defence) Sam Kauona, at the last minute the BRA and associated Bougainville Interim Government (BIG) leadership decided against participation. BIG/BRA members were directed not to attend. Toroama, then about 24, ignored those directions and attended – and spoke in favour of peace. He also provided support to BIG legal adviser Theodore Miriung, who also ignored directions against attending the conference. Miriung emerged as a significant voice for unification of the then deeply divided Bougainvilleans. In April 1995, Miriung became premier of the Bougainville Transitional Government (BTG), established as a peacebuilding measure, replacing the NSPG (suspended since mid-1990).

Later in 1995, Miriung led in persuading both the PNG and Australian governments to agree to talks in Cairns, Australia, between the BIG/BRA and the BTG. BIG and BRA head Francis Ona opposed participation in the talks. Toroama confronted Ona, encouraging BIG/BRA participation. The talks achieved unprecedented progress towards an understanding amongst the divided Bougainville leaders and agreement for further talks in 1996. Although conflict escalation in 1996 and early 1997 delayed talks, the Cairns process continued with intra-Bougainville talks at Burnham in New Zealand in July 1997.

Towards the end of the Burnham talks, problems arose in reaching agreement on the release of the five PNG Police and Defence Force members held as BRA ‘hostages’ since the September 1996 Kangu Beach massacre. Toroama was influential in the BRA leadership agreeing to release the hostages as a goodwill gesture to PNG, an important contribution to later Bougainville/PNG engagement through the Lincoln talks.

In mid-1999, just as the difficult BPA negotiations began, Sam Kauona departed Bougainville for a training program in New Zealand. Toroama became the BRA’s Chief of Defence for the two years of BPA negotiations (1999-2001) and the subsequent two years of BPA weapons disposal process implementation (2001-2003). He unified the diverse BRA elements, developed cooperation with the pro-PNG Bougainville Resistance Forces (BRF) leadership, and guided the BRA into numerous compromises. At the same time, the BRA, BRF and PNG were negotiating the weapons disposal agreement that was largely incorporated into the BPA. Toroama played a strong leadership role in the difficult negotiations.

From mid-2002 to mid-2004, Toroama was one of three BRA nominees to the 24-member Bougainville Constitutional Commission, which consulted widely amongst Bougainvilleans to develop the Bougainville constitution.

Toroama then played less prominent but nevertheless public roles in peacebuilding. He contributed to public debate on a range of issues, as in February 2015 when he and other former BRA leaders confronted then president John Momis in a public meeting about adherence of the ABG to good governance standards. He has played important roles, both as a facilitator and as a party, in many reconciliation ceremonies intended to resolve conflict-related divisions.

[1] The author made extensive efforts to check the veracity of the contents of the three-part series by seeking comments from an extensive network of concerned parties prior to the peer review process.

This is the first in a three-part series on Bougainville President, Ishmael Toroama. You can find the second post here and the third here.

This blog was first published as DPA In Brief 2021/12 by the Department of Pacific Affairs at ANU as part of their In Brief series.