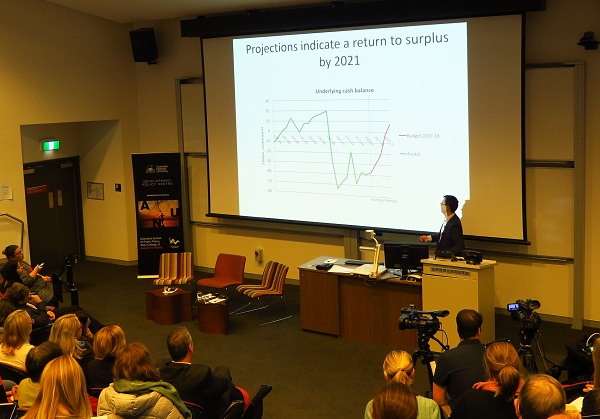 Scott Morrison’s second Federal budget is, thankfully, a pragmatic one. It is a reset budget which clears the decks of previous budget measures stuck in the Senate, and puts forward new measures that are relatively Senate friendly. It also signals the potential end to the budget emergency with the Treasurer announcing that government recurrent spending is under control and, by 2018-19, all of it will be paid out of revenue rather than debt. Has the debt and deficit issue that has plagued aid allocations gone away, and can we expect a more certain and stable aid budget in the future?

A key emphasis in this year’s budget was on “good” and “bad” debt. Good debt, according to the Treasurer, is one that is used to fund assets that earn a positive return over time (think capital spending), whereas bad debt does not (think recurrent spending). This distinction helps to frame the $51bn of proposed spending on infrastructure in the budget, largely funded by “good” debt, in a much more favourable light.

Figure 1 shows that the government was racking up large amounts of both bad debt and total debt after the global fiscal crisis (as indicated by a negative adjusted NOB and negative underlying cash balance, respectively). However, this reliance on bad debt is set to rapidly diminish. By 2018-19, the adjusted NOB is projected to enter positive territory, two years prior to achieving a projected underlying cash surplus.

The projected return to budget surplus across both measures reflects a strong rebound in projected government revenue and controls over government spending, the latter limited to growth of around 2% per year in real terms. Figure 2 shows projected year-on-year real spending growth in education and health sectors that are in line with this 2% limit, although this is not the case in other sectors: defence and Official Development Assistance (ODA) spending is set to grow at above 4% and below minus 2% per year, respectively, beyond 2018-19. 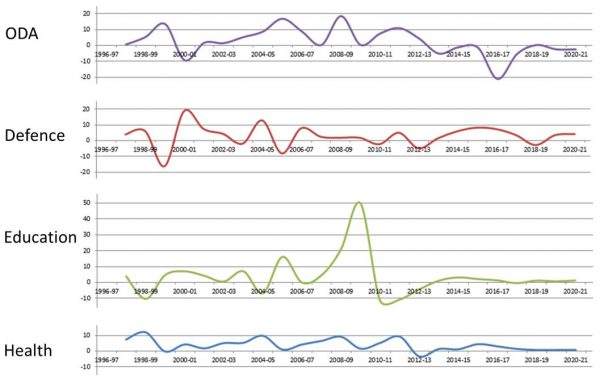 The budget’s improving position, particularly on an adjusted NOB basis, appears to indicate that the budget emergency is over. Despite this improvement, it is particularly perplexing that aid has been cut again in this budget, in real terms, exactly when the budget is projected to be in surplus. The continuation of aid cuts, totalling 33% in real terms since 2012-13, indicates that there is a lack of support for aid spending that seems to go beyond the budget emergency explanation.

Two alternate explanations for the real aid cuts were discussed at the Development Policy Centre’s Aid Budget Breakfast. The first is that the budget emergency is not over, and that the real cuts to the aid budget provide some sort of insurance in case revenue projections prove to be overly optimistic. Indeed, the underlying cash balance projections in this budget are as bullish as in previous budgets. As Figure 3 shows, these previous projections were overly optimistic, and so achieving a budget surplus anytime soon is highly questionable.

The second explanation is that the aid budget was not specifically targeted by Treasury for real cuts, but instead spending priorities within the Department of Foreign Affairs and Trade (DFAT) portfolio have favoured non-ODA spending, such as those related to national security, at the expense of ODA.

If this is the case, and national security issues continue, then the likelihood further cuts to ODA will in part depend on the perception within the department that aid can help reduce risks to Australia’s security. From this perspective, aid advocates might want to better emphasise the aid program’s role in countering underlying causes of violent extremism and conflict abroad that pose a threat to national security.

The good news in this budget is that the government is prepared to raise revenue to meet key spending commitments, rather than relying on finding savings in other areas, such as the aid budget. The bad news is that the conditions that created the budget emergency, which have in the past been used to justify cuts to the aid budget, have not yet gone away. Any additional pressure on DFAT to increase its contribution to national security in the future may also result in further reallocations away from ODA.

Anthony Swan is a Research Fellow at the Development Policy Centre. This post is based on his presentation given at the 2017 Aid Budget Breakfast; watch the video here, listen to the podcast here, and download the slides here.