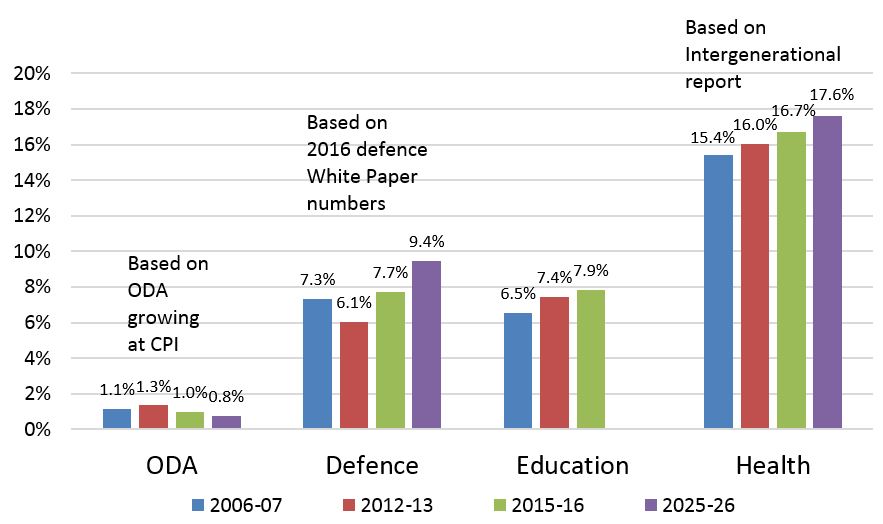 We’ve had three years of talk about “budget emergency” and a massive “debt and deficit” problem. The consequence has been huge cuts to the aid program in an attempt to bring the budget back to balance. Following the release of the 2016-17 Federal Budget, it is a good time to reflect on how the government has performed in its task of budget repair, and the implications for future funding of foreign aid. 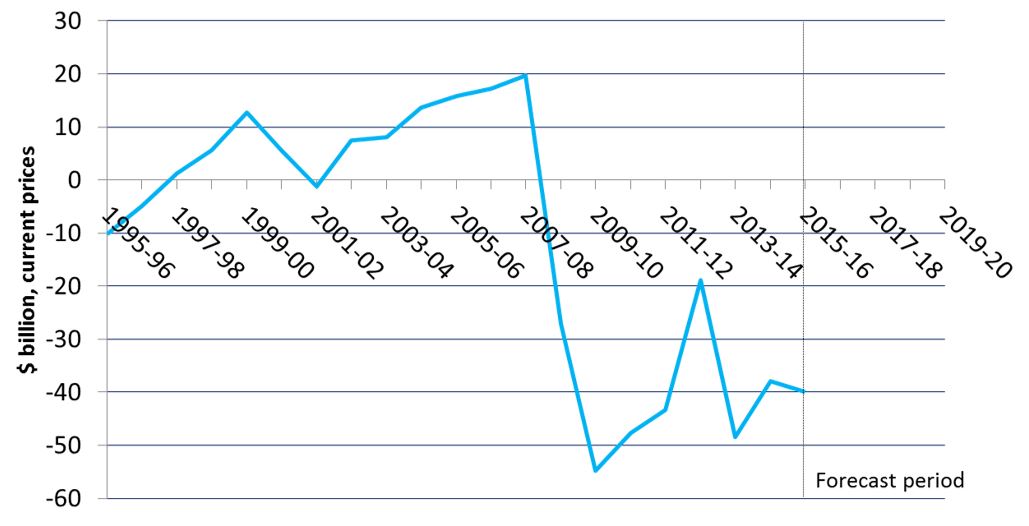 The chart above shows the Federal government’s underlying cash balance. I’m deliberately not showing projections because I want to focus on what has actually been achieved rather than what the government thinks will be achieved. The two are potentially very different, as we will see.

With a deficit of $40 billion expected at the end of this June, clearly not much budget repair has been achieved. Why is this?

Looking at actual government revenue and expenditure as a share of GDP (below) we see there is a large and persistent gap between the two in recent years. What efforts have been made to close the gap?

Revenue and expenditure as share of GDP (actuals and projections) 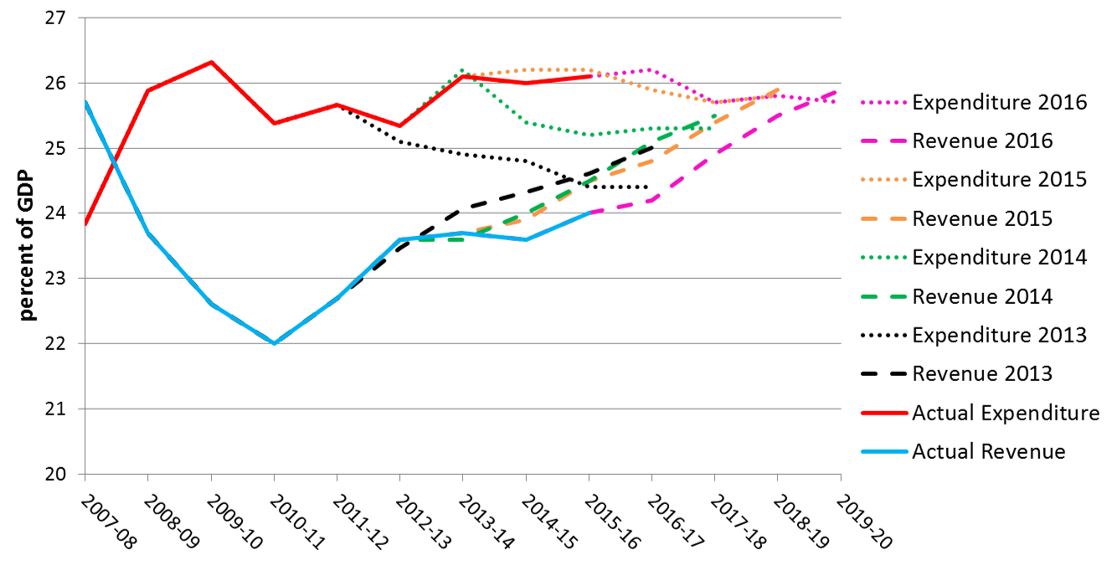 To help answer this question, the chart shows revenue and expenditure projections over the last four federal budgets. At the time of the last Labor government budget in 2013, there was an expectation of strong revenue growth and large cuts to spending (the black dashed and dotted lines). Compared to actual figures both measures failed, despite the Coalition winning government during that financial year with a mandate for budget repair. The revenue and expenditure projections in the first Abbott government budget in 2014 (the green dashed and dotted lines) contained an initial upwards spike in spending followed by reductions, as well as strong revenue growth, to bring the budget towards balance. Once again the measure failed, apart from the initial increase in spending.

Turning to revenue and expenditure projections in the 2015 and 2016 budgets (orange and pink dashed and dotted lines, respectively), we can see that the Coalition has essentially given up trying to cut spending. The plan for budget repair is not out the window though, with strong revenue growth, once again, expected to bring the budget back to balance.

At this point it is telling to look at the underlying cash balance again, but this time with the current and previous projections. Is budget repair really likely to happen this time round?

Failure to return the budget to surplus will further exacerbate government debt. Already government net debt as a share of GDP is expected to nearly double since the Coalition won government back in 2013. 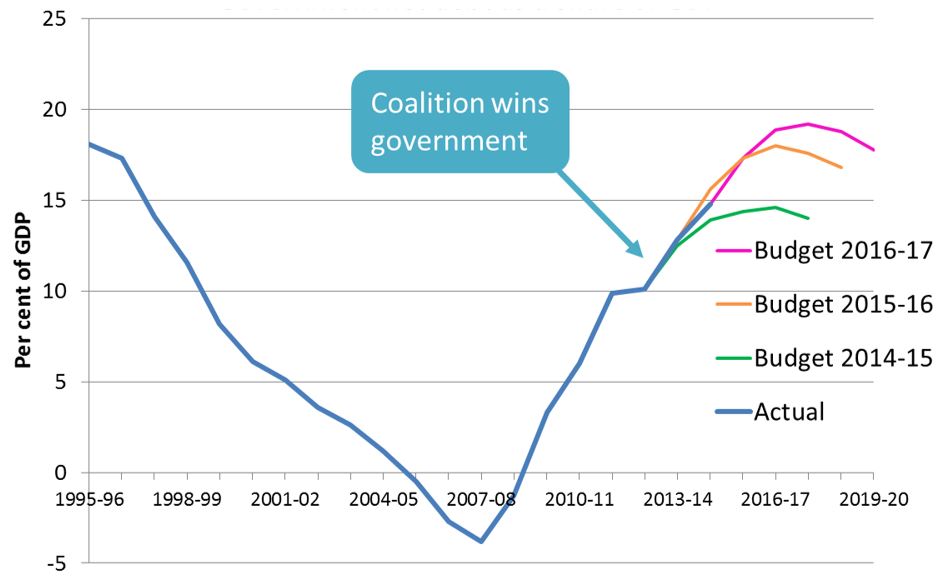 Why should the aid sector care about these numbers? I believe that the key to a growing real aid budget is a healthy government fiscal position. The question then is why isn’t budget repair happening? I have four reasons.

First, there are few actual revenue raising measures being implemented. While there is talk of tax reform, government is yet to make hard decisions. Meanwhile there is an over-reliance on relatively small tax changes (e.g., tobacco excise). Furthermore, where there have been new tax initiatives they have been offset by tax cuts elsewhere (e.g., superannuation concessions, income tax cuts, company tax cuts). Treasurer Morrison says that he would prefer to have an extra dollar in the hands of the public rather than in the hands of government. While he is entitled to this view, it is not consistent with the Coalition’s mantra of budget repair.

Second, slow wages growth is limiting growth in tax revenue. This is partly a result of disappointing labour productivity growth over many years, reflecting in large part a lack of productivity enhancing reforms both at federal and state levels. A low inflationary (and now deflationary) environment has also meant that personal incomes are not being pushed into higher tax brackets, so government revenue is not benefiting from so-called bracket-creep. The decision in the 2016 budget to increase the upper limit on the 32.5c marginal tax rate bracket (from $80,000 to $87,000) to reduce the effects of bracket-creep makes little sense from a budget repair perspective. A lower number of working-age people (by 150,000 in 2019) is also expected to restrict wages growth. This effect is due to lower than expected net migration – an apparent policy decision by government.

Third, there has been a lack of control on spending. Yes, this year’s budget is on the eve of an election. However, little has changed over the last three budgets. Cuts to spending in one area, such as in the aid sector, have been offset by new spending elsewhere. An important point, which may not be so obvious to the casual observer, is that the Treasury’s poor record on projecting revenue has likely contributed to government overspend. Would spending have been as high if revenue projections in past budgets were not overly optimistic?

Fourth, there seems to be a continued expectation that the economy will pick up by itself. However, many economies (think Japan, for example) have for a long time struggled with a low growth and low inflationary environment, similar to what Australia is currently experiencing.

What does this mean for the aid budget? We can already expect a squeeze on the volume of aid over the long term due to expanding funding in other sectors, particularly defence and health. The chart below illustrates the share of government expenditure across selected sectors, including Official Development Assistance (foreign aid), at different points in time.

From an aid budget perspective it’s important for the government to strengthen its fiscal position before this squeeze occurs, otherwise the aid sector might be targeted again when the next “budget repair” comes along.

Anthony Swan is a Research Fellow at the Development Policy Centre. This post is based on a presentation [pdf] given at the 2016 Aid Budget Breakfast.