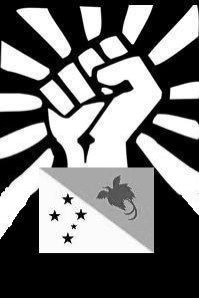 As of July 2012 there just over 100,000 registered facebook users in Papua New Guinea (PNG), most of whom are below the age of 35, and an increasing array of PNG related websites. The explosion in the use of social media by Papua New Guineans is changing the way that they are engaging in politics, business and social activities on the home front. It is also changing the way that the international community is engaging with Papua New Guinea (PNG). In an unprecedented style, resonant with tours made by highly public figures and dignitaries, a young PNG man (Martyn Namorong, prolific blogger, self described betel nut seller and grassroots person) undertook a privately sponsored two week visit to the Australian cities of Brisbane, Sydney, Melbourne and Canberra in 2012. This visit entailed an advance announcement and a highly publicised agenda and programme wherein he met with prominent Australian PNG experts, politicians, journalists, ordinary Australian residents and gave seminars to a variety of Australian audiences.

A number of recent articles and radio interviews (Radio Australia, ABC, 4 July 2012;  Radio Australia, ABC, 5th July 2012; Rausim! Social media and political protest in Papua New Guinea; Catherine Graue of Australia Network) with pioneering social media practitioners reveals some important features of the emergence of social media in PNG. These people include Emmanuel Narakobi (administrator of the Masalai Blog and the facebook forum Sharp talk); Tavurvur who administers the Garamut blog); Martyn Namorong, Alexander Rheeney , (PNG journalist and administrator of PNG Perspective); and Nou Vada (law student, blogger and administrator of The Edebamona Blog). In recognition of this emerging form of media Malum Nalu (Journalist and administrator of the Malum Nalu blogspot) was awarded the UNESCO/Divine Word Institute Award for Communication and Development in 2011.

Martyn Namorong and Alexander Rheeney highlight (ABC Radio Australia) how PNG society is very community based and many educated and urban based Papua New Guineans remain closely connected with their rural based families. They point out that this means that the current numbers of facebook users represents a significant mass of PNG society whose engagement through social media has the potential of being translated and amplified through various offline networks. The far wider coverage of basic mobile phone services (phone calls and text messages) adds to this amplification effect.

Much of the discussion is focussed on how social media is revolutionising the way in which Papua New Guineans are engaging in the political arena. For example, Narakobi highlights that during the Easter 2012 political protests membership of the sharp talk facebook forum jumped from between 3000 and 4000 to over 6000.

Yet, other questions emerge beyond the potential role of social media in political transformation. Core to these is: How do social, development and political actors (national and international) translate this social revolution into something that matters for those that need it most? In this regard, two questions emerge:

Both these questions are particularly important within the PNG context where lack of political will, corruption and lack of implementation capacity are the main impediments to development; violence is an explicit and blatant form of power; literacy rates are below 50%; over 30% of the population live below the poverty line; there are over 700 languages; and systems of law and order and law enforcement are dysfunctional at best. They are also important for development policy where an environment of functioning democracy, political stability and protection of society is the foundation for the achievement of development outcomes.

The following paragraphs are intended to highlight just some of the dynamics emerging in the social media sphere in PNG.

That the above referred social media pioneers have chosen different forms of public representation – real name versus pseudonym – is revealing of the social and political dynamics underpinning the use of social media in PNG. Namorong says that using his real name adds credibility and accountability to his writing. Another advantage is the direct credit that one receives for their contribution via social media. One disadvantage is the security of a person who speaks out on a sensitive issue such as corruption. On the other hand, Tavurur has blogged very successfully (high quality, high number of followers and sustained over a number of years) for several years now. In other cases, such as a facebook forum, the use of a pseudonym poses questions of transparency and accountability on the part of a forum administrator.

In a country where names are often synonymous with ethnicity, family and sometimes political affiliation and in a context where corruption and violence are widespread, it is understandable that some may wish to conceal their real identities when engaging in the public sphere. It is also interesting to see that many people use their real identities and openly write about issues such as corruption and violence. In one example, a woman in a forum of over 1000 people wrote how she did not support a relative who was a candidate in the election. She acknowledged that she might get in trouble with the family for speaking out but felt that she needed to have her say. In another example, in the PNGians against domestic violence forum, which has over 6000 members, women publicly plead for help to deal with violent situations. These examples reveal a civil society that is actively engaging on matters that affect their lives and that social media presents an accessible avenue to do so. Whether it is a safe and free median to engage is yet to be seen.

The table below provides a snapshot of some of the forum profiles and membership figures and reveals a variety of styles. Closed versus open groups; known administrators versus unknown administrators; provincial focus versus national or issue based focus. Membership of groups ranges from anywhere below 100 to over 6000.

I conclude by raising some issues for consideration in the hope of stimulating further dialogue.

Whatever the answer to these questions, it is clear that there are huge implications for the practice of development in PNG. If social media is to make a difference in PNG beyond its ability to reshape the political arena, it must be utilised as a tool by all actors interested in the development of PNG to translate this new energy into tangible development outcomes.

Michelle Nayahamui Rooney is a PhD candidate with the SSGM, IPS, College of Asia and the Pacific, ANU. Her research focuses on exploring social transformations and responses in traditional socioeconomic protection mechanisms through the lens of inter-household income transfers. Prior to taking up studies Michelle worked as a national officer in the development sector in Papua New Guinea.