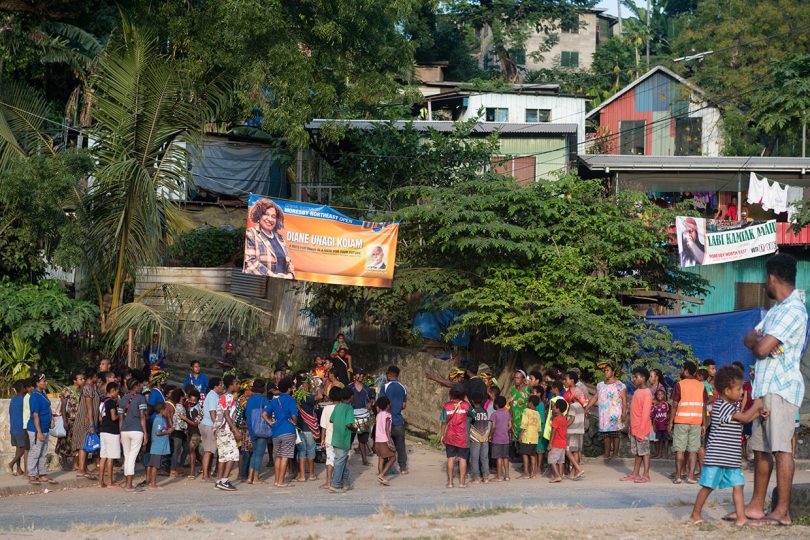 Keeping track of even the basics in Papua New Guinea’s 2022 general election has been hard. With polling already underway, the exact number of candidates contesting is still, it appears, unknown. Newspapers reported numbers in May and June, but these were wrong. Finally, late last week what appeared to be a comprehensive count of candidates was released. Even this wasn’t entirely accurate: it’s based on a list that includes candidates who have withdrawn from competition, as well as others (including one sitting member) who have recently passed away (none under suspicious circumstances). And it’s probably prone to change –there may still be legal rulings that affect final numbers.

Still, the current list is as good as we’re going to get. Here’s what the numbers have to say so far.

Candidate numbers are up, but not by much. Correcting for the deaths and withdrawals that I know about, 3619 candidates appear to be contesting in the 2022 general election. The final number could change, but only by a handful. This is the highest number of candidates ever to have ever stood in a general election in PNG. The increase from 2017, as the chart below shows, is nearly 9%. 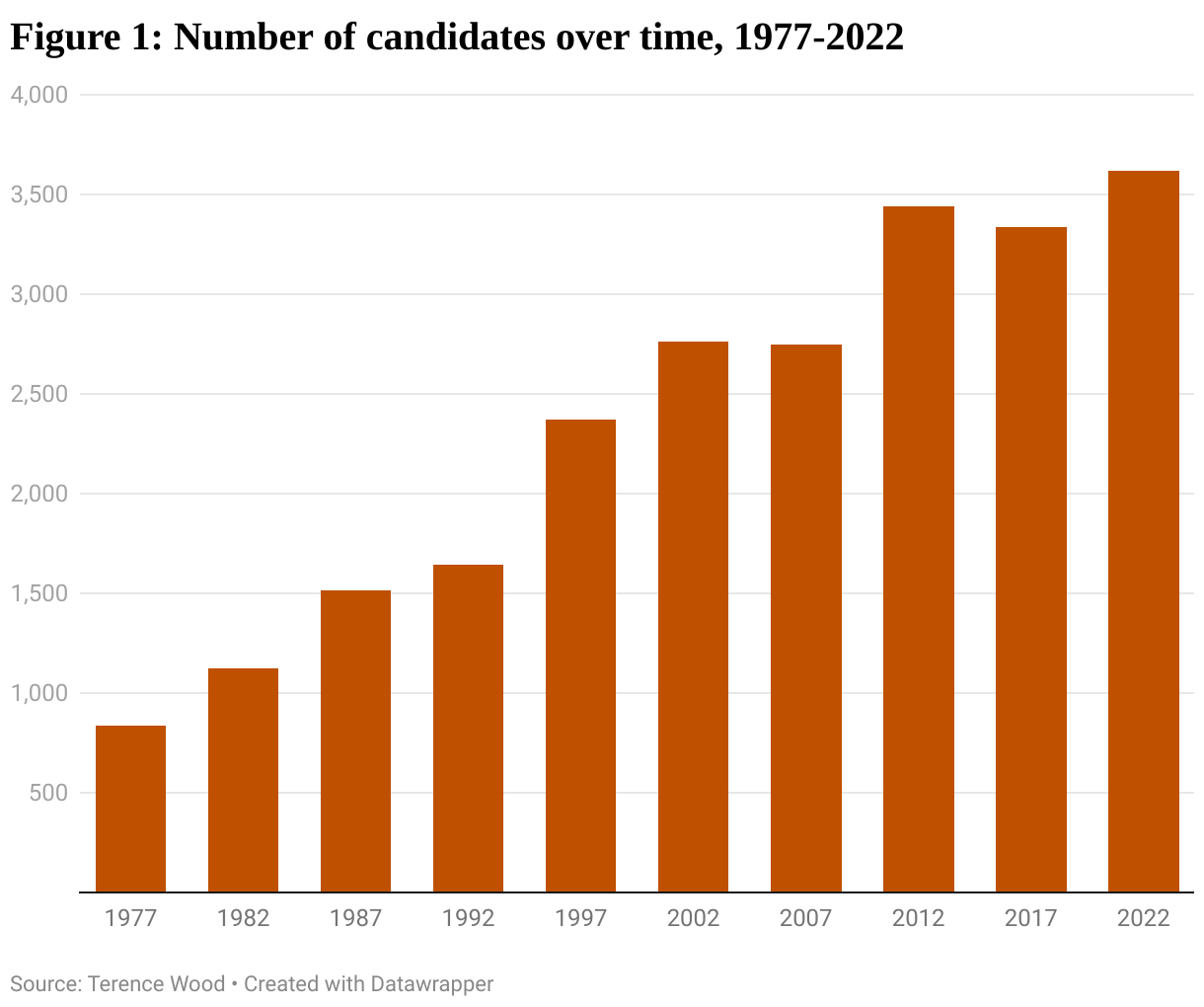 That sounds significant, but thanks to the decision to increase the number of seats in 2022, there are also seven more electorates. And the average number of candidates per electorate has increased by only 0.7 candidates.

The 2022 elections in Papua New Guinea will be busy, but for the country as a whole, no more so than usual.

Although the increase in the overall number of candidates is modest, there is a massive variation between electorates. One of the most startling aspects of electoral competition in PNG is just how much it varies around the country. It varies in many ways, including levels of cheating and violence, but one of the most basic forms of variation is the number of candidates standing. Some competitions are crowded, others remarkably quiet. You can see this in the next chart of candidate numbers by electorate in 2022. 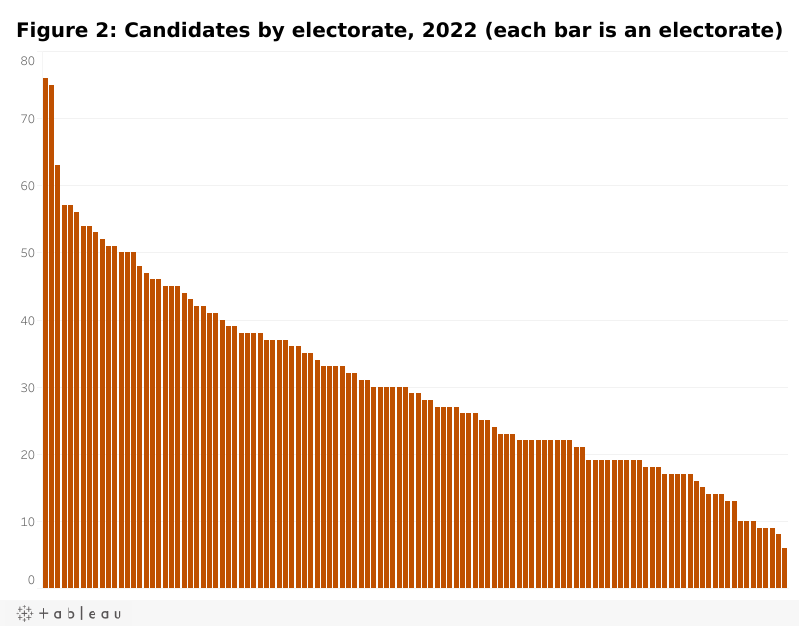 Explaining just why some electorates have so many candidates and others so few isn’t easy: if you’re thinking it’s a tale of crowded urban electorates versus peaceful rural ones (which is largely the case in Solomon Islands, for example), you’re wrong. Right next to bustling Moresby North-East, is Moresby South, where only eight candidates have thrown their hats into the ring.

It’s also not entirely a story of regional differences. As you can see in the next chart, which shows the average number of candidates per region, as well as candidate numbers in the busiest and quietest seats, there are clearly fewer candidates per electorate in the Islands Region, but the variation between the other regions is a lot less than within them. When it comes to candidate numbers, competition is different in the Islands but less so between other regions. 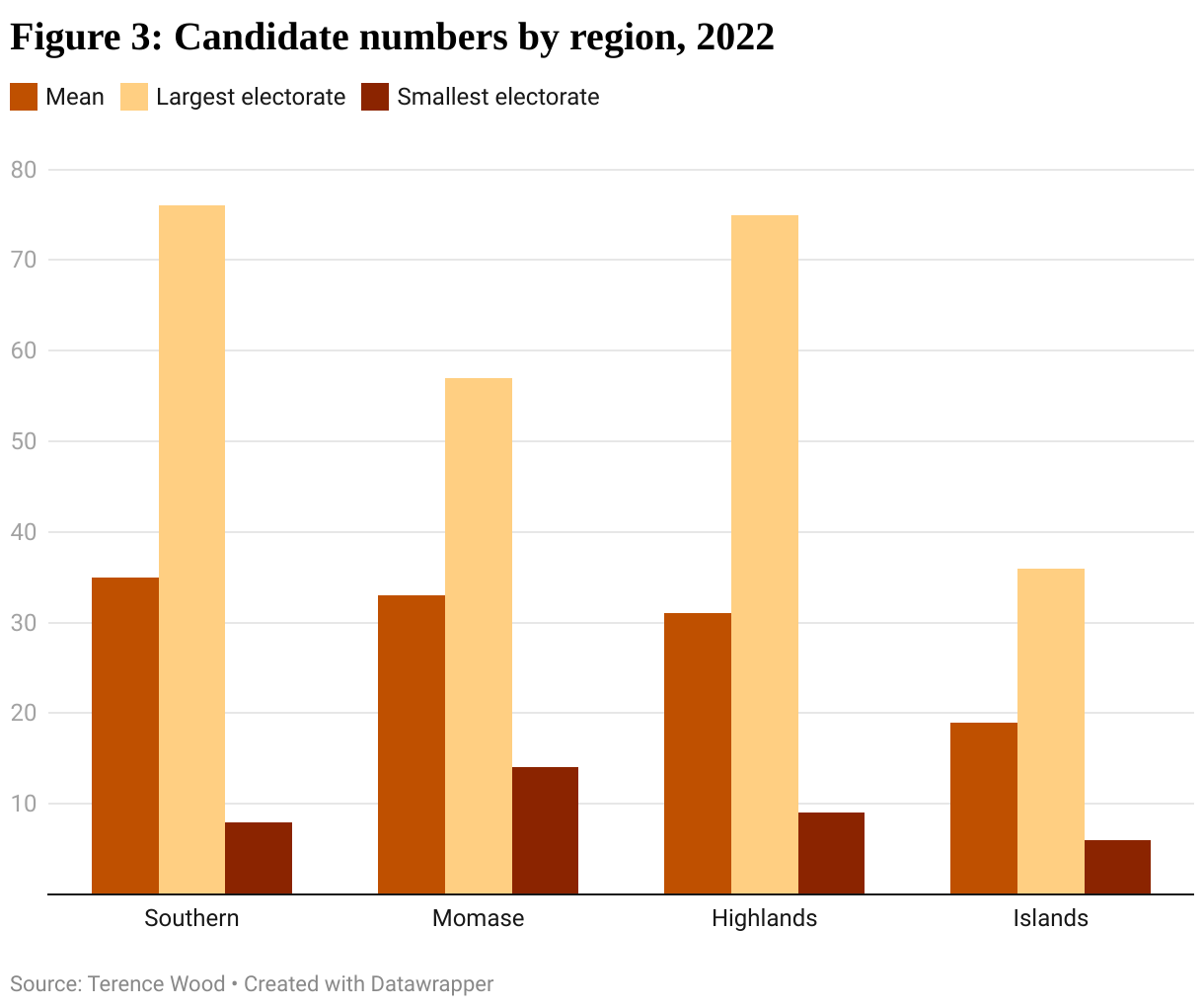 Nor is it a clear-cut story of size and population. The average number of candidates in the large, populous provincial seats is very slightly less than in the smaller open seats. (There was also no correlation between candidate numbers and votes cast 2017.)

Part of the explanation, we think, for varying candidate numbers, is that more candidates enter the field when they think their chances of winning are higher. You can see this in the impact of incumbency on candidate numbers: incumbents have an advantage in elections in PNG – they are more likely to win than anyone else (even if they’re still not that likely to win in an absolute sense). But some electorates, either because they’re new as a product of redistricting or because their sitting member died recently, don’t have incumbents. And in 2022, as you can see in the next chart, on average more candidates are standing in electorates without incumbents. 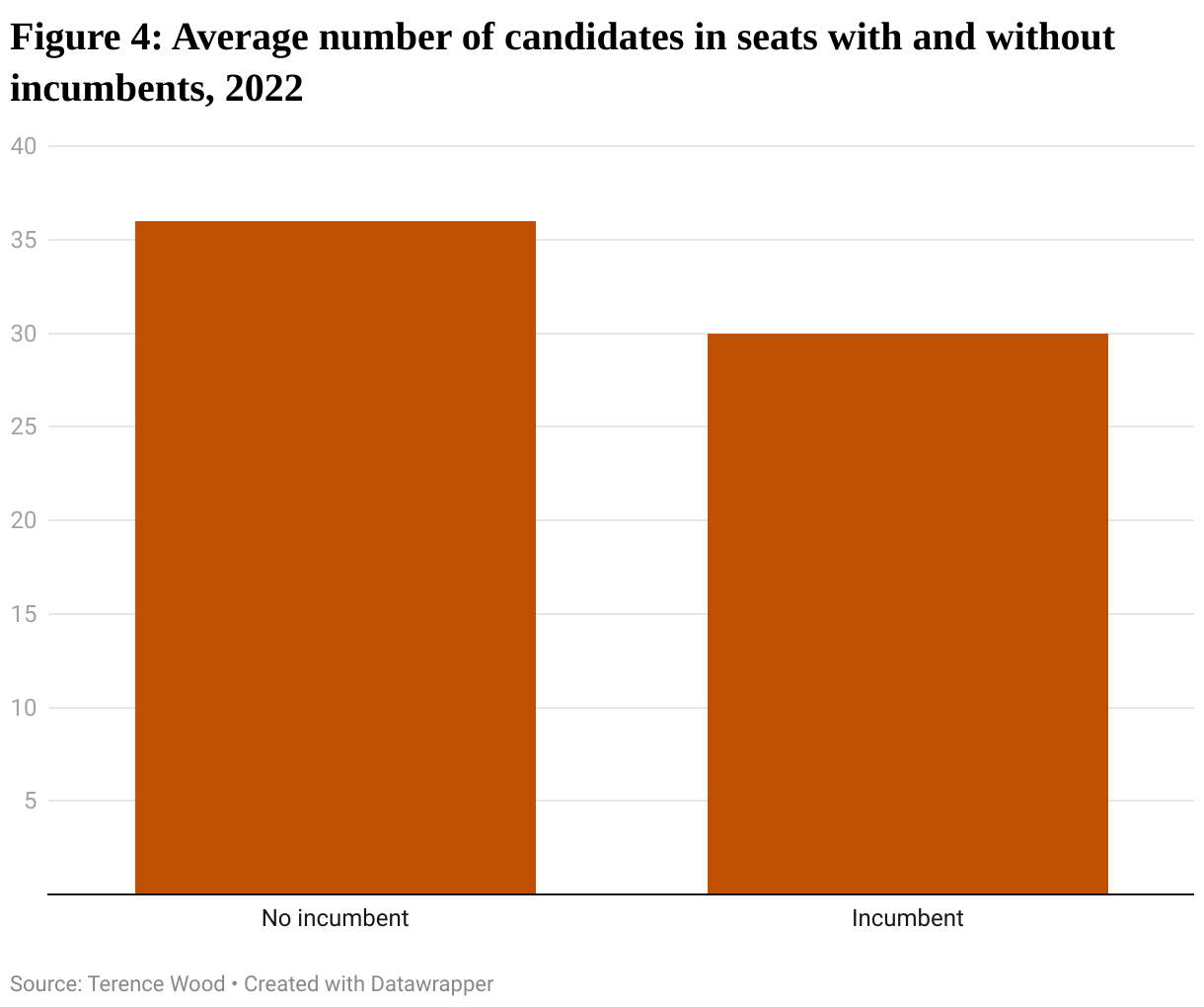 Finally, gender. Unfortunately, the publicly available data don’t have details on gender. However, reported numbers suggest women will comprise about 4.6% of total candidates. If correct, this is a slight fall from 2017 (5.4%). But let’s see first: a variety of different female candidate numbers have been bandied about over recent months, each apparently final, only to subsequently change.

A lot remains to be seen in the 2022 election: how badly procedural problems will blight the electoral process, who will win, who will lose. But thus far, in terms of candidate numbers at least, it’s shaping up to be a typical election. Typical in Papua New Guinea means variety though. Right now PNG is a single country struggling to hold a national election. Yet within the overall process, there are 118 contests going down, each with very different dynamics.

The candidate list that I have been working off shouldn’t be treated as official or final, but you can download it.

This research was undertaken with the support of the ANU-UPNG Partnership, an initiative of the PNG-Australia Partnership, with funding from the Department of Foreign Affairs and Trade. The views represent those of the author only.