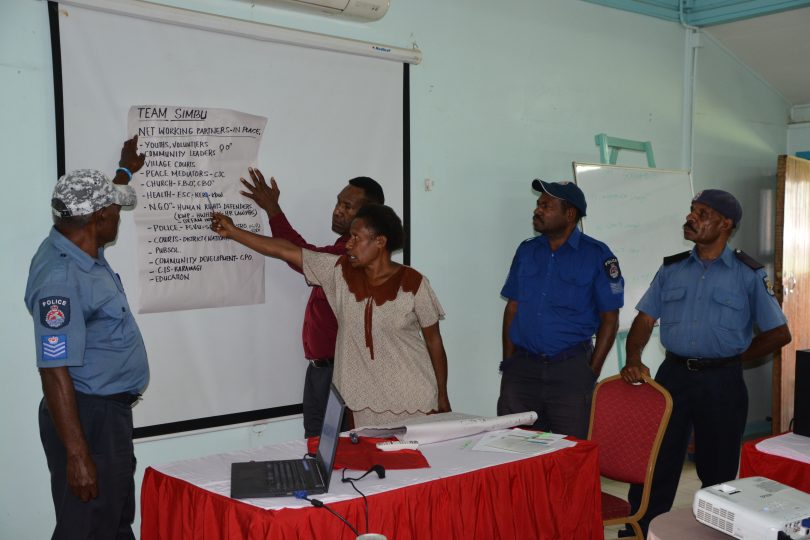 The prequel to this post examined the challenge of distinguishing sorcery from sorcery accusation-related violence (SARV) when conducting workshops about the latter. In this post, we discuss three other challenges for training in and awareness of SARV, and how they can be addressed.

Participants at workshops in an environment like PNG are likely to have diverse cultural understandings about sorcery or witchcraft. This may make group work difficult as participants struggle to understand each other’s worldviews and particular local traditions. This problem is not assisted by terms such as sorcery and witchcraft that are used to cover a wide variety of very disparate practices. One way forward is to acknowledge the differences in sorcery and witchcraft traditions throughout PNG at the start of the program, and provide a few examples. Then, participants may be encouraged to focus on how the beliefs are manifested in the particular location of their work rather than their place of origin, particularly those that lead to the most violent behaviour.

A related point is the importance of acknowledging the value and legitimacy of the participant’s local knowledge and experience of subjects covered in the workshop. Participants are likely to be important sources of information about practical strategies for dealing with a range of scenarios related to SARV, from which the group and subsequent groups will benefit. At the same time, it may be necessary to respectfully correct sincerely-held but incorrect interpretations of state legislation and regulations.

It is clear from our research that there is widespread confusion about the legal situation with regard to SARV. The implications of the repeal of the Sorcery Act 1971 appear not to be well-understood. There is a great need for simple explanations about the following in particular:

The final challenge addressed here is helping participants put what they have learnt into action after the workshop/training has finished. Crucially, they will be returning to workplaces and communities where the issue of responding to SARV may not be seen as important, and where there may even be complicity in SARV. The sharp distinctions attempted to be made at the workshop/training between SARV and sorcery are also likely to become blurred quite quickly.

Two strategies may be of assistance. One is ensuring that when workshop participants are identified, consideration is given to ensuring that there are three or more participants from a particular work environment rather than just one or two, so that the kernel of a network can be created.

Second, it may help for participants to develop action plans that can be used to map out scenarios that are likely to arise once participants return home, and appropriate ways to respond to these. It is easier to have clear ideas about response pathways, available resources, and support networks prepared ahead of time. This could be done as part of a final exercise where participants are asked to brainstorm two situations related to SARV that they are likely to find themselves in, such as being a bystander to SARV or being required to respond in an official capacity to an individual who has been accused of or is concerned about sorcery. They should prepare responses based on an understanding of the resources available to them in their particular work environment, with a focus on appropriate referral pathways and key messages.

Finally, as with all training, it is important that it is not stand-alone but occurs on a regular basis.

This is the second in a two-part series on challenges for training in and awareness of sorcery accusation-related violence. The first part can be found here, and a combined version of the two is available here.