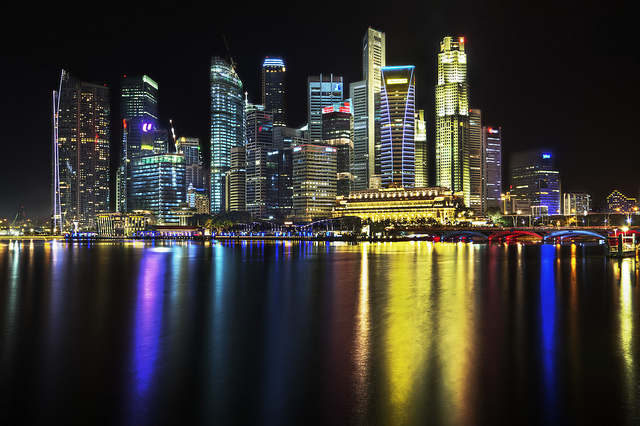 There is a certain irony to the fact that the Australian Foreign Minister’s recent speech, in which she advised China that if it wanted to get rich it would have to become democratic, was delivered in Singapore. History shows, Julie Bishop said, that “democracy and democratic institutions are essential for nations if they are to reach their economic potential. The only countries in the world who have escaped the ‘middle-income’ trap to become wealthy, high-income and advanced economies are democracies – with the exception of a small number of oil-rich Middle Eastern states.”

Singapore is certainly high-income – its income per capita is higher than Australia’s – but it is not a democracy. The ruling party has been in power for half a century. There are only a handful of opposition representatives in Parliament. This is not just due to good performance.

Singapore is regarded by Freedom House to be “Partially Free” in relation to both political and civil liberties. The Polity IV project describes Singapore as an “anocracy”, intermediate to an autocracy and a democracy. Neither index of democracy shows any improvement at all in Singapore’s score over the last 40 years. Even a sympathetic commentator, Professor Yi Feng of Claremont Graduate University, has characterised Singapore (in a chapter in this book) as having “a party-state apparatus that combines ideological domination, demobilization, and repression to achieve pervasive technocratic control of all sectors of society.”

If that’s all a bit abstract, consider that, just a couple of weeks after Julie Bishop delivered her speech, an 18-year-old Singaporean teen blogger was granted asylum in the United States on the grounds of “persecution on account of his political opinion.” That wouldn’t happen in a democracy.

This argument that democracy is essential for prosperity has recently been popularized by the academics Daron Acemoglu and James Robinson in their book Why Nations Fail? They focus specifically on China, and argue that, unless it becomes a democracy, which they think is unlikely, its growth will stall. They predict that we will look back on China, as we do now on the Soviet Union, and wonder what the fuss was about. Their argument is that growth is a relatively simple matter for poor countries to achieve. Poor countries can rely on technological catch-up, and authoritarian governance is no barrier to that. But if countries want to become high-income their economies have to become innovative, and they have to allow old, no-longer-competitive sectors to fade away. Authoritarianism, they argue, is incompatible with a culture of innovation and creative destruction.

It’s a convincing argument, but Acemoglu and Robinson don’t mention the island state. Yet, Singapore does present an alternative model and shouldn’t be dismissed purely on the basis of its small population. Singapore scores extremely well on international indices relating to the rule of law, the elimination of corruption, economic freedom and education. Perhaps it is these things that matter for prosperity, and, if they can be achieved without democracy, then countries can be rich but not free.

Of course, democracy and the political freedoms that go with it are things we value for their own sake. And it is plausible that we value them more as we get richer. If that is the case, then defending an authoritarian system will become increasingly costly, and political stability, another prerequisite for growth, will only be possible with a shift to democracy. This seems to sum up Taiwan and Korea’s experience over the last few decades.

But, again, we cannot take a democratic uprising for granted. Many in China continue to believe that their country is too big to be democratic. Many Chinese look at the United States, and the fact that lawmakers spend most of their time raising funds for re-election, and wonder if democracy is indeed the best way forward.

Indeed, while nearly all rich countries are democratic, the converse does not hold. Democracy in poor countries is often clientelistic, where parties are weak, and politicians focus on providing private, local goods, not public, national ones. There is certainly no guarantee that becoming a democracy puts you on the path to prosperity.

This question of the link between democracy and prosperity is not only relevant for China. What are called “dominant party authoritarian regimes” are the fastest growing class of political systems in the world, increasing their share from just one-tenth of all countries in 1990 to about one-quarter today. These are countries, like Singapore, which have the trappings of democracy, but where the ruling party has worked out how to manipulate the system to stay in power. Many of them are middle-income. Malaysia is a classic example, and it is about to become a high-income country, thereby escaping the infamous middle-income trap.

Whether countries like Malaysia, as well as China, a more narrowly authoritarian regime, need to become democracies to keep growing is in my view one of the great unanswered questions of our time.

Professor Stephen Howes is the Director of the Development Policy Centre.