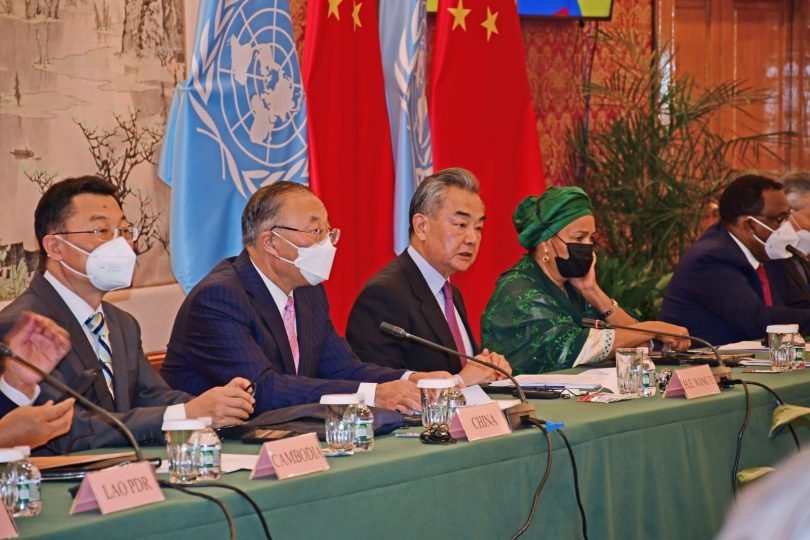 Last month, during his address to the UN General Assembly (UNGA), Chinese Foreign Ministry Wang Yi presented China’s Global Development Initiative (GDI) as a pathway to accelerate implementation of the 2030 agenda. In recent years, China has sought to communicate a more public development cooperation narrative, articulated through its three white papers (2011, 2014, 2021) and most recently the GDI, which President Xi Jinping originally announced at the 2021 UNGA.

China casts development cooperation as its duty as a responsible member of the global community, both as a provider and as a promoter of new trends and modalities. It anchors its approach in south-south cooperation (SSC), which has broader parameters than Official Development Assistance (ODA), and includes investments, diplomacy and other modalities, such as those implemented through the Belt and Road Initiative (BRI).

The GDI marks a significant departure in China’s development narrative because it presents a normative framework for China’s engagements. China asserts that the 2030 agenda is off track, with the GDI laying out and advocating its vision with six accompanying principles (a people-centred approach, development as a priority, benefits for all, innovation-driven development, harmony with nature, and action-oriented approaches), eight priorities (poverty reduction, food security, COVID-19 and vaccines, financing for development, climate change and green development, industrialisation, digital economy, and connectivity), governance arrangements, and actions.

China has been sceptical of the post-World War II development architecture, including the Development Assistance Committee (DAC) of the OECD and the Global Partnership for Effective Development Cooperation. While the OECD DAC narrative has attempted to expand the tent and create space for SSC, triangular cooperation, and some of SSC’s principles, OECD approaches are still perceived by China as exclusive – clubbed around expectations and standards that are not universally shared.

While China’s GDI principles and priorities closely approximate a mainstream development agenda, China prefers to raise its own tent and invite others in. In January 2022, the Group of Friends of the GDI, which includes over 50 countries, officially launched at the UN and was followed by a ministerial meeting of the Group of Friends on the side of the recent 2022 UNGA.

The launch of the GDI doesn’t suggest China is replacing or diminishing the BRI. The BRI and GDI are best seen as parallel tracks. While the BRI is economic growth oriented, the GDI is development oriented. The BRI delivers hardware and economic corridors, while the GDI focuses on software, livelihoods, knowledge transfer and capacity building. The BRI is market oriented, where enterprises play a key role. By contrast, the GDI is public oriented, delivering grants and development assistance. While the BRI’s pathways are mostly bilateral and regional, involving MOUs with partner countries, the GDI promotes diverse partnerships with multilaterals, NGOs and the private sector. China’s National Development and Reform Commission is the main coordinating agency behind the BRI, whereas the Ministry of Foreign Affairs and the China International Development Cooperation Agency drive the GDI.

The GDI seems to be more than lofty ideals and is packed with ambition. Just as the BRI connects the dots on Chinese infrastructure investments, the GDI frames China’s existing and new development cooperation efforts – repackaging, harmonising and synergising them for both China’s own internal coordination and articulation to the world.

Further down the track, China plans to launch new initiatives such as the World Digital Education Alliance, and generate a GDI project pool of practical cooperation projects in areas such as poverty reduction, food security, industrialisation and capacity building. One of these projects, the Nepal Smiling Children project, implemented by one of China’s first and largest NGOs, the China Rural Development Foundation, was launched as an inaugural initiative of the GDI in July by Liu Jianchao, head of the International Department of the Communist Party of China.

Although the GDI has drawn limited attention from audiences beyond the development community, China claims that more than 100 countries and organisations support or welcome it.

Great power rivalry and politics are increasingly driving development cooperation, more so than the SDGs, the challenges of rising inequality, or climate change. Initiatives such as the G7’s Partnership for Global Infrastructure and Investment, the new US-Pacific Partnership, the Indo-Pacific Economic Framework, the Quad’s sustainability agenda, and triangular cooperation partnerships which bolster and promote India as a partner of choice, all have some element of countering China as an objective.

If China had released the GDI a decade ago, it probably would have been welcomed by Western/Northern countries, because development cooperation was then more of a space for engagement and dialogue around shared priorities, and less of an arena for soft power competition. However, given the array of geostrategic issues that frame any current development cooperation efforts, the GDI is understandably perceived by some as a soft power play on China’s part. Critics see the GDI as a “propagation of Chinese ideology in the developing world.”

Partner countries will also be sceptical of the GDI’s intent. If development cooperation (from China or others) is deployed as a tool for advancing foreign policy and geostrategic interests, partner countries will have little faith in the sincerity and sustainability of any commitments. For the GDI to pass muster, China must demonstrate that, despite any soft power bargaining that the GDI may leverage, development priorities are key and the GDI will deliver the goods.