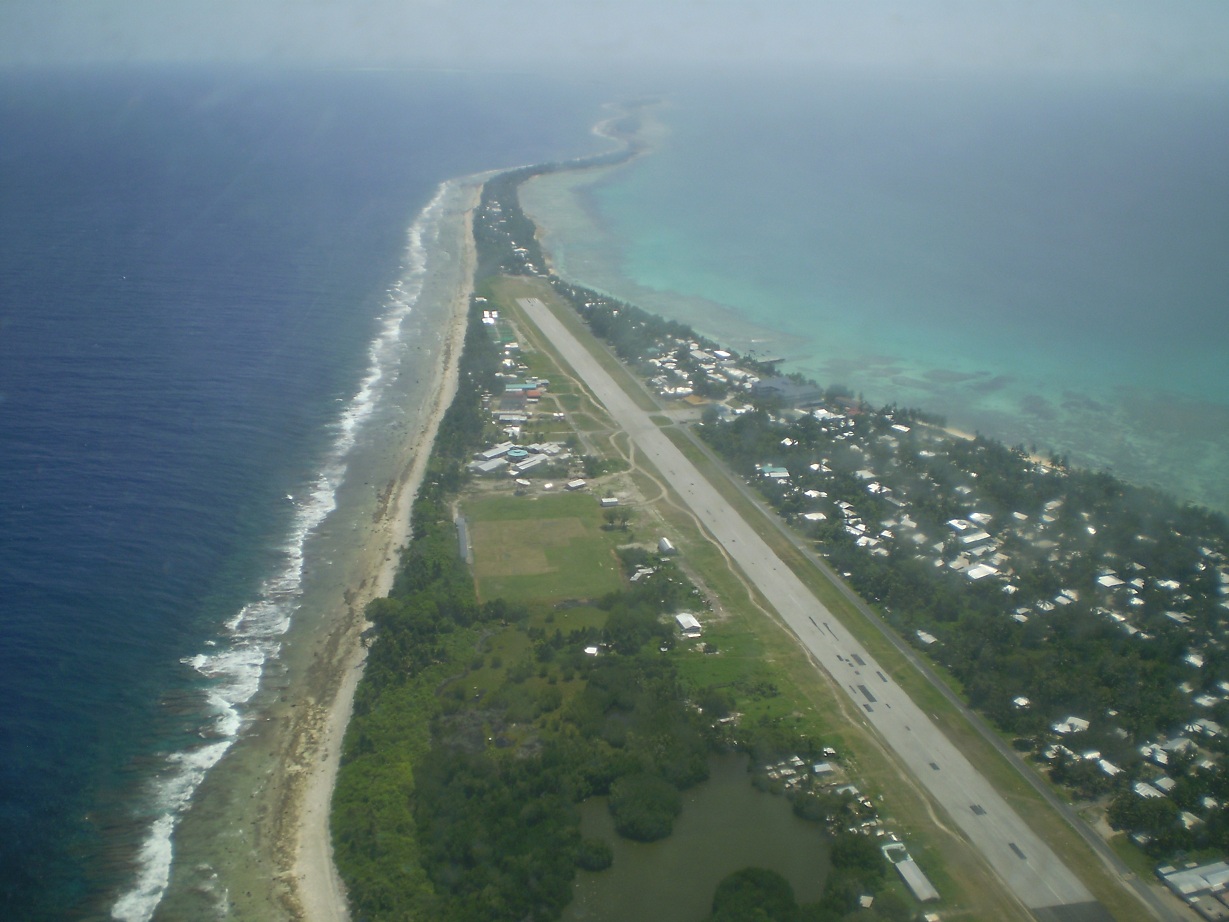 The future impacts of climate change at the local level remain highly uncertain. There is broad consensus that at the global level, the climate is changing, and that anthropogenic emissions of greenhouse gases are responsible. The exact impact on local communities however is more difficult to estimate, given the complexity of the climate system. This makes the design of climate change adaptation initiatives a challenge.

Uncertainty in the Pacific

The Pacific Climate Change Science Program (PCCSP) has gone some way in addressing this gap in knowledge, releasing its full report on local level climate change impacts in the Pacific in November 2011 (available here). The research was undertaken by the Bureau of Meteorology and CSIRO in partnership with the meteorological services of Pacific island countries, and was funded by AusAID and the Department of Climate Change and Energy Efficiency under the International Climate Change Adaptation Initiative (ICCAI).

Although the research dramatically improves our knowledge of the potential impacts of climate change on Pacific island countries, the report notes that significant uncertainties remain. The issue of how policy makers should negotiate uncertainty when formulating climate change adaptation strategies therefore remains relevant.

Dealing with Uncertainty: Real Options Theory and “No Regrets” Measures

The treatment of climate change adaptation initiatives as a risk mitigation measure has proven popular in recent years. Leo Dobes, in a recent Centre for Climate Economics and Policy working paper, Adaptation to climate change: Formulating policy under uncertainty, highlights the problems with such an approach. Addressing climate change adaptation in a deterministic manner will inevitably lead to unnecessary and wasteful expenditure (see this previous post by Dobes). Instead, he suggests applying a “real options” approach, commonly used in finance, to climate change adaptation. The basic idea is that construction of say, a sea wall that protects a village’s garden, could be wasteful given that we are unsure about the extent of future sea level rises. A better alternative is to create an “option” for a sea wall, by reserving land and/or possibly constructing the foundations so that future construction of the sea wall is made less costly.

Dobes goes further in his recent paper by adopting what he calls a “Rumsfeldian” approach. This involves the categorisation of knowledge/uncertainty in terms of “known knowns”, “known unknowns”, “unknown knowns”, and “unknown unknowns” when looking at climate change adaptation (see figure 1). 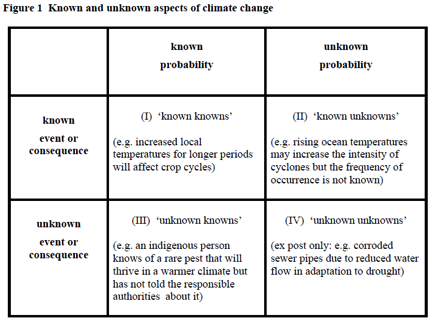 Dobes argues that “known knowns”, such as construction of a dike to prevent seasonal flooding, are best addressed at the level of private individuals. He notes however that this is only the case when assuming information is available to individuals. In rural areas in much of the Pacific, this is a big assumption.

“Known unknowns”, such as the extent of sea level rises, are best addressed using real options (as outlined above with the example of a sea wall).

Impacts of climate change that have not yet been envisaged by policy makers are more difficult to address. Dobes argues for “no regrets” measures, which are beneficial even in the absence of climate change impacts, and for measures that will enable a country to respond flexibly to external shocks. Some examples he provides include improved governance and microeconomic reform. Economic development would also improve resilience to unexpected climate change impacts, as actors would have greater financial resources at their disposal.

Good in Theory, But in Practice?

“No regrets” measures of the kind highlighted above are of course easier to argue for than to implement. In the Pacific, donors have pushed good governance and microeconomic reform under the guise of economics development for decades, with limited success. A further problem in the micro-states is that donors are themselves uncertain about how to promote economic development: the export-led strategies involving manufactured goods that have succeeded in East Asia are unlikely to work in isolated and small island states that suffer from high transportation costs and diseconomies of scale (see Nic Soni’s blog for a brief summary of this).

There are other examples of “no regrets” measures in the Pacific that are not so difficult to implement. The move by Kiribati to train nurses is an excellent example (see this blog post by Nic Maclellan). The strategy provides i-Kiribati with an “insurance policy” should sea level rises make life in Kiribati untenable. If this does not occur, the measure is still worthwhile, improving health outcomes for i-Kiribati, and potentially providing the nurses with employment opportunities overseas.

The donor-recipient relationship completely changes the dynamic of climate change adaptation activities. Recipient governments are unlikely to support a real options approach involving partial construction of a sea wall, where there is no guarantee that the sea wall will be completed in the future when it is needed. Promises from donors are unlikely to suffice. Indeed, even in the event that a sea wall is not needed, the recipient government may support its construction, given the boost to the local economy this entails.

Thus, irrespective of whether a real options approach is recognised as an optimal strategy for addressing a climate change, it is unlikely to receive the support of beneficiaries in developing countries. From the perspective of beneficiaries, adopting such a strategy could potentially jeopardise access to climate change funds. Instead, recipient governments will work to secure as large a piece of the “climate change adaptation financing” pie as possible; a rational strategy where adaptation financing can be re-distributed by donors to other countries.

There are funding strategies/aid modalities that can address such problems. Trust funds for example, could provide beneficiary governments with a guarantee that climate change adaptation funding will be delivered – whether or not an option is pursued further. This is an approach now being considered by the Pacific Islands Forum Secretariat. There is already experience in the Pacific with trust funds, and small atoll states like Kiribati and Tuvalu have shown that they can function well in a micro-state context. Importantly, the use of trust funds for climate change adaptation would enable Pacific island countries that face capacity saturation (being unable to implement additional projects due to capacity constraints in their civil service) to secure their “fair share” of global climate change adaptation financing.

The key message is that the way in which climate financing for adaptation is distributed will have an important impact on the incentives of governments in the Pacific.

Another difficulty with the practical application of the “real options” approach for climate change adaptation is governance within recipient countries. Politicians can be expected to use climate change adaptation initiatives in order to secure political capital. A real options approach is unlikely to deliver in this respect, despite being sensible policy. In many ways, this mirrors political processes in Australia and other developed countries. The effects however, are much more pronounced in Pacific island countries.

Consider countries where political systems are characterised by clientelism, such as in PNG, Solomon Islands and Vanuatu. In such countries, leaders or “big men” are expected to channel state resources to their support base if they hope to be re-elected (Sahlin’s seminal paper on “big men” can be found here). Climate change adaptation initiatives will therefore only be supported by government where they can provide some form of political reward to constituents. Now refer back to the example of the sea wall around the village garden. The sea wall, whether or not it is needed, may be looked upon favourably by a community – it provides protection against a potential cyclone (so is a risk mitigation measure), and could provide employment opportunities during its construction. In many cases, it may also represent a symbol of “development” which neighbouring villages do not have (this commonly occurs with rural electrification projects). Setting aside coastal land for a sea wall that may be constructed in the future is unlikely to generate the same level of support. The climate change adaptation activity – be it a sea wall, an upgraded bridge, a dyke, or a cyclone-proof village hall – represents a “big man’s” ability to secure resources for his supporters. The same is not true for a “real option” to implement any of these activities.

None of this is to say that a “real options” approach cannot be used by policy makers for climate change adaptation. It is a powerful conceptual tool, and when applied appropriately, can lead to good policy outcomes. For this to occur though, policy makers need to be aware of the political environment in which “real options” are being applied. Research is also needed on the financing strategies/modalities that will work best in the numerous political cultures of the Pacific.