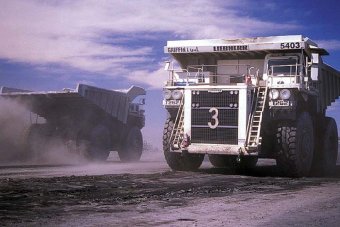 One of the most powerful things that we in developed countries can do to help combat the resource curse in developing countries is to make sure that mining and drilling companies are transparent about their activities. Companies that are domiciled and/or listed on stock exchanges in developed countries run most of the world’s natural resource extraction projects, so it is actually within our power to enforce this. On Wednesday last week I attended a conference organised by Publish What You Pay (PWYP) that focussed on legislation that is about to become active in the USA and the European Union, and which will require transparency of extractive company payments to host governments. These advances throw into sharp relief the fact that Australia has not made any significant progress in enacting equivalent legislation. The PWYP event was one of a number of conferences held in Sydney last week related to mining and development – see Margaret Callan’s recent post for this blog.

The table below supplements our recent policy brief [pdf] on extractive industry transparency with some additional detail regarding these two mandatory disclosure rules, in particular the additional progress made by the European Union towards establishing its rules. 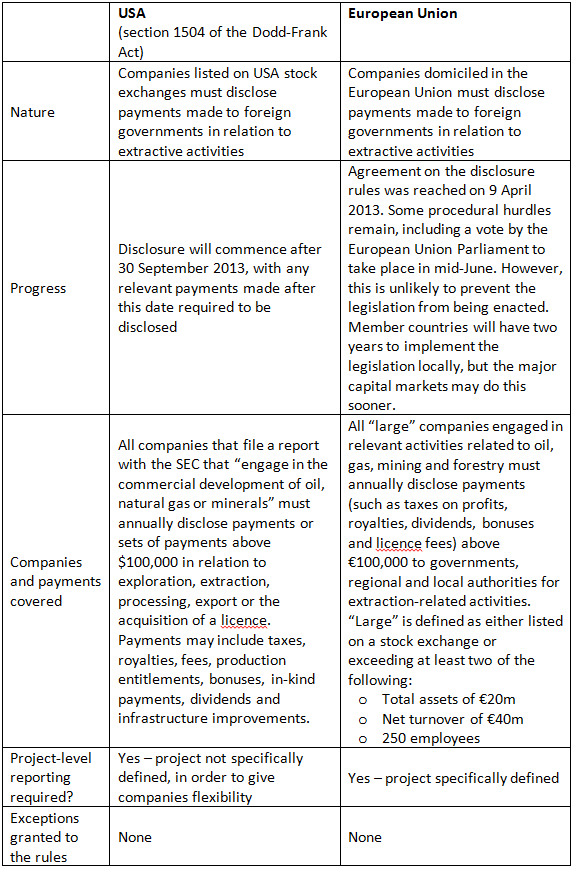 Additional aspects of the above schemes were noted during the conference:

There are a number of arguments against having such reporting standards. One of the main objections that have been made is that the legislation will weaken the competitive power of firms that are subject to it with respect to firms that are not. For example, the availability of information about the payment terms of a US firm’s existing projects might disadvantage it in competition for future projects where a firm that is not subject to these rules is also bidding. However, a point made at the conference was that the type of information to be disclosed is not trade secrets, but simply amounts being paid to governments. There are not many situations in which this type of information advantage would be decisive in winning a contract. Further, there is no information disadvantage if all bidding companies are subject to the same rules, so this problem is smaller the greater the number of jurisdictions that enact similar legislation.

Another objection is the possibility that countries in which extractive firms operate may have regulations expressly prohibiting the release of the information covered under the new legislation. In my view, even if some countries did prohibit disclosure (it is not clear that there are such countries), this would not be a reason to neglect to establish such disclosure rules. Making transparency the norm in global extractive industries will empower civil society in all resource-rich countries; it will provide valuable information in countries where no prohibitions exist, and it will highlight the potential for corruption in countries where prohibitions do exist. In particular, if a country enacted prohibitions in response to the new legislation, then this would be cause for significant concern.

Conferences are good, but mandatory disclosure rules are better

Together, the USA and European Union rules will cover many of the world’s major international extractive companies. But that doesn’t excuse Australia from doing its part; extractive industries make up 45% of ASX-listed companies. The arguments typically made against establishing mandatory reporting legislation are weak in light of the fact that the USA and European Union have managed to enact such legislation.

Achieving transparency of extractive industry payments to governments is only a start. Extending transparency to other stages in the process (e.g. exploration arrangements, the share of revenues between government and extractive enterprise, government expenditure of natural resource revenues), and enabling civil society to gainfully use the information generated to hold governments to account, are issues that are yet to be addressed in many resource-rich developing countries, some of which already require transparency of contracts between extractive enterprise and government. But starts are nevertheless important, and we are being left behind, a fact no number of conferences can hide.

Michael Wulfsohn is a Research Officer at the Development Policy Centre.