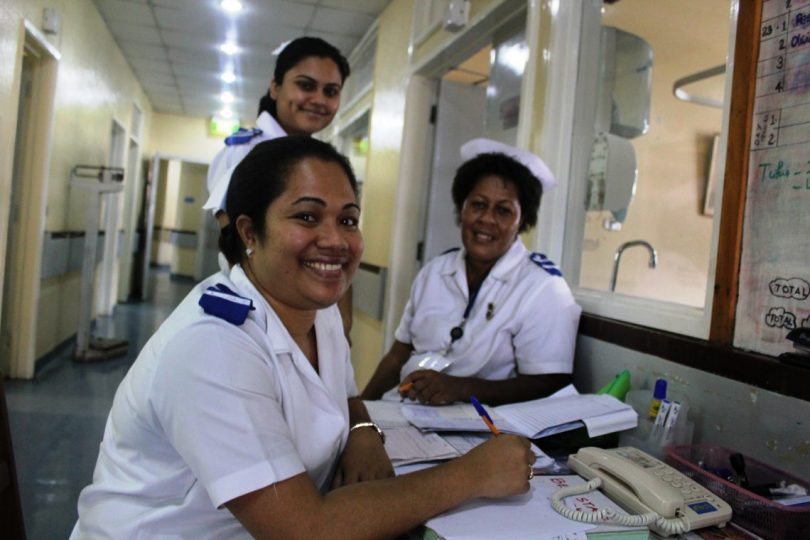 Nurses on a maternity ward, Fiji (Credit: DFAT/Flickr CC BY 2.0)

In the era of the Pacific Step-Up, Australian aid for health has taken a publicity backseat to the flagship policies of increased labour mobility and regional educational opportunities. The Health for Development Strategy 2015-2020, describes Australia’s approach to improving health through aid, wherein health system strengthening is described as its highest priority, of which human resources is an essential building block. However, an inconsistency threatens to hamper efforts towards health system strengthening in Pacific island nations – the role Australia plays in hiring health care professionals from the very nations we are seeking to assist.

Two key pillars of the Step-Up – increased regional education opportunities and labour mobility – may well prove to be avenues that contribute to the problem of ‘brain drain’ and deepen the human resource deficits that weaken healthcare systems in aid recipient nations. A critique of the issues that arise with recruitment of health workers from our Pacific neighbours is timely, and required, to ensure that our efforts to address Australian workforce shortages do not thwart capacity-building endeavours in the Pacific’s struggling healthcare systems.

Research shows that migration by Pacific island health professionals to Australia is high, and that it worsens the shortage of health workers in source countries. Joel Negin’s paper on Australia and New Zealand’s contribution to Pacific Island health worker brain drain reported that during the 2006 Census, 455 Pacific born doctors and 1158 Pacific born nurses and midwives were working in Australia. By the 2016 Census these numbers had ballooned to 607 doctors and 2954 nurses. In some cases the number of migrant healthcare workers in Australia from certain nations outnumber the local workforce in their home countries. Stemming from this migration, developing nations not only lose those best equipped to deliver healthcare to their vulnerable populations, they also lose the financial investment made in the education of those personnel. As a result, countries who can ill afford such losses subsidise healthcare in the west. As Kimberley Oman and others pointed out in 2006, where donors fund in-country specialist training programs, as Australian Aid has done in the Pacific, many graduates migrate to use those skills in the donor country, and Australia inadvertently becomes beneficiary of its own aid.

In response to this unjust dynamic, the World Health Organisation’s Global Code of Practice on the International Recruitment of Health Personnel (the Code) was adopted by all 193 Member States of the World Health Assembly (WHA), including Australia on 21 May 2010. Article 5.1 of the Code discourages active recruitment of health personnel from developing countries facing critical shortages. However, even in the absence of active recruitment, various push and pull factors drive the exodus to wealthier states, such as relatively poor remuneration at home, limited career prospects, difficult working conditions, and inadequate standards of living. Among the pull factors, access to tertiary qualifications and specialist training pathways not available in one’s home country are at the forefront. Sponsored (aid or other) trainees often sent with the intention of up-skilling and returning, often elect to stay in the host training country once they and their family have acclimatised to life abroad. In this way, aid programs such as the Australian Government’s Australia Awards, with its emphasis on bringing regional scholars to Australia for university training, present a means to draw more healthcare workers to Australia for study that may culminate in one-way migration.

Nine working visa classes exist to facilitate migration for skilled healthcare professionals, such as doctors and nurses, to Australia. As part of its Pacific Step-Up the Australian Government’s Pacific Labour Scheme provides for an uncapped number of low- and semi-skilled migrants to come to Australia to work for up to three years. Some nursing carers already qualify for migration under that scheme. It remains to be seen whether the scheme could be expanded to include highly skilled healthcare professionals such as doctors and nurses as well. Relaxed immigration conditions that may lure more migrant healthcare workers away from where their services are most needed risks undermining our health development goals and commitments.

In spite of the apparent injustice of the current system, it is important to adopt a nuanced understanding of the interplay of migration, healthcare and human resources in the Pacific. As John Connell points out, no adequate data exist to produce a costbenefit analysis ‘that elegantly balances education costs, remittances, social costs’ with the presumed harms of the migration of Pacific healthcare professionals. Furthermore, for Pacific Islanders, the descendants of master navigators who populated a vast watery continent, migration needs to be considered in the continuum of millenia-old habits of voyaging. Doyle and Roberts argued that ‘skilled migration is part of a broad cultural tradition of migration within the Pacific Islands, and is an accepted and valued part of Pacific life’. Indeed, there may be pecuniary benefits to source nations, not least income sent home to families via remittances, which make up a significant percentage of the Gross Domestic Product in some Pacific island states. However, it is difficult to compare the gains made through remittances to the loss incurred through brain drain.

Gillian Brock in her book, Debating Brain Drain, mooted some punitive measures as deterrents to migration, such as obligations to continue to pay tax to one’s home nation, or complete a period of compulsory national service. However such strategies place the burden on individuals seeking to better their circumstances, rather than the systems that give rise to such disparities and yearnings, and sit in tension with Article 13 of the UN Declaration of Human Rights which enshrines an individual’s right to freedom of movement, and right to leave any country, including their own, should they choose. Instead, to rectify the imbalance of power and the net loss sustained by source countries to create a more just system overall, the Code advocates that ‘both source and destination countries should derive benefits from the international migration of health personnel’. It then offers suggestions to address the losses created by such recruitment, such as host countries offering compensation to the source nations, or providing enhanced in-country training opportunities or material aid in the form of medical technology commensurate with the value of the personnel lost, although the calculation of such loss is self-evidently impractical.

Like many nations, Australia has yet to explicitly address methods to decrease dependence on foreign healthcare workers, and provide remedial measures which acknowledge that Australia benefits from migrant personnel at the expense of source countries. To balance the scales, Australia needs to critically examine the intersection of healthcare recruitment practices, development aid, and immigration policies to ensure:

In this way, as Australia ‘steps up’ its support for its Pacific neighbours, we can be confident that our efforts are considerate, consistent and just.

Dr Matt Bray is a Rotuman-Australian medical doctor who has worked as a clinician and researcher in Fiji. He is currently completing a Master of Public Health through James Cook University.