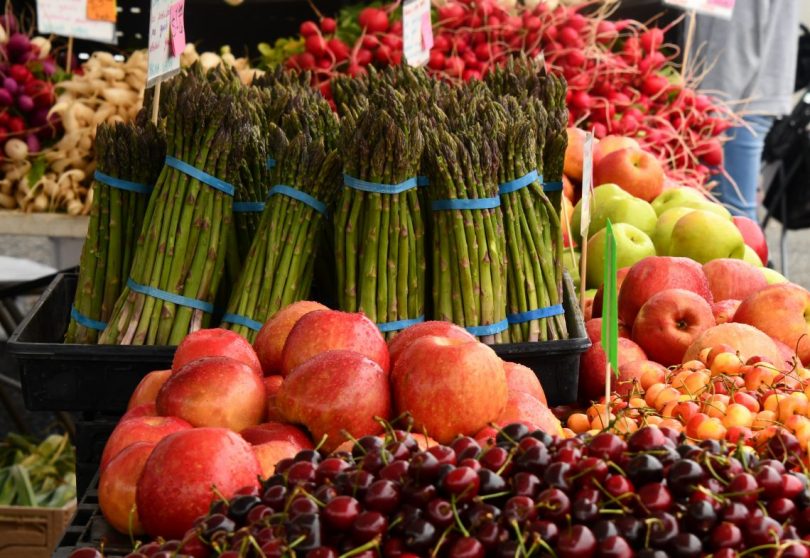 Keeping our supermarkets stocked with fruit and vegetables will be a key policy challenge. (Credit: Shelley Pauls on Unsplash)

It hasn’t taken long for the horticultural industry to flag serious concerns about the coming months. Unlike the tourism, hospitality and retail sectors that currently have too many workers to meet demand, horticulture is about to face severe shortages. The most recent ABARES farm survey suggests that about 50 per cent of the workforce for vegetable farms, and about 30 per cent for fruit and nut farms hold a visa of some sort.

Not only is the horticultural sector reliant on migrant labour; more pertinently at the current time, it is reliant on temporary migrant labour. Seasonal Worker Programme (SWP) workers from the Pacific are in Australia for up to nine months; backpackers for up to three years. As the visas of existing migrant workers expire, new workers are needed to take their place.

Unfortunately, COVID-19 has brought migration to a shuddering halt. Backpackers who had planned trips to Australia are abandoning them in their tens of thousands. It is also quite possible that COVID-19 has induced existing backpackers to leave, to get home on the advice of their governments, and before borders are closed. And Pacific countries have started pulling the plug on labour mobility, with Vanuatu, the biggest provider, banning new participation in Australia’s SWP and New Zealand’s Recognised Seasonal Employment program.

In any case, the current reality is that all migration of non-residents into Australia and New Zealand is banned, and, even if it wasn’t, there may soon be no flights for migrants to arrive on.

In theory, Australians laid off in the many sectors now facing recession could head for the countryside and start picking fruit. In practice, it is just not going to happen. The work is difficult, and farms often geographically isolated. It would take years not months to change the reality that farm work is just not in the choice set of most Australians – who, after all, live in one of the most urbanised and richest countries in the world.

With no new workers arriving, the obvious solution to prevent a horticultural labour shortage is to extend the stay of those temporary migrant workers already in Australia. Those whose visas are set to expire should, if they wish, be allowed to stay, and work, longer.

Politicians might be worried about exacerbating rising unemployment outside the farm sector. Extending SWP visas has no risk of that, since those workers must work on farms. Most backpackers work off farm, so if backpacker visas are also extended it could be only for those engaged in farm work.

The above seems like an obvious step. Another obvious way the government could help would be getting information out to employers and especially workers. There are some crazy myths out there doing the rounds. Targeted campaigns for seasonal workers would be a great resource.

The government could also consider some more radical steps.

First, the government could innovate and introduce what the United States calls “Temporary Protected Status”. Typically this is provided to temporary or unauthorised migrants whose home country experiences a natural disaster or civil unrest, allowing them to remain in the United States. For example, Haitians were provided with protected status in the wake of the 2010 earthquake.

With the whole world being classified ‘do not travel’ by the Department of Foreign Affairs and Trade, Australia could use a similar visa to provide people on temporary visas in Australia security of residency for a period of time, say 12 months. This would reduce travel and potential transmission across borders. It would also act to include more people under the umbrella of Australia’s world-class public health infrastructure and institutions, a global public good. Domestically, this would slow emigration, which could lead to increased competition for jobs, but could also boost domestic demand.

Second, the government could purposefully seek out more Pacific farm workers. It could arrange special flights, and facilitate quarantine arrangements. This would be a demanding ask (not least because it would violate the current ban on non-resident arrivals into Australia and New Zealand), but then these are demanding times. Employers could contribute to the additional costs.

One of the underappreciated aspects of Australia’s Migration Act is how easy it is to modify and innovate through regulations and policy. There’s a lot that could be done to ensure that, in these most difficult of times, our supermarkets continue to be fully stocked with fresh fruit and vegetables.