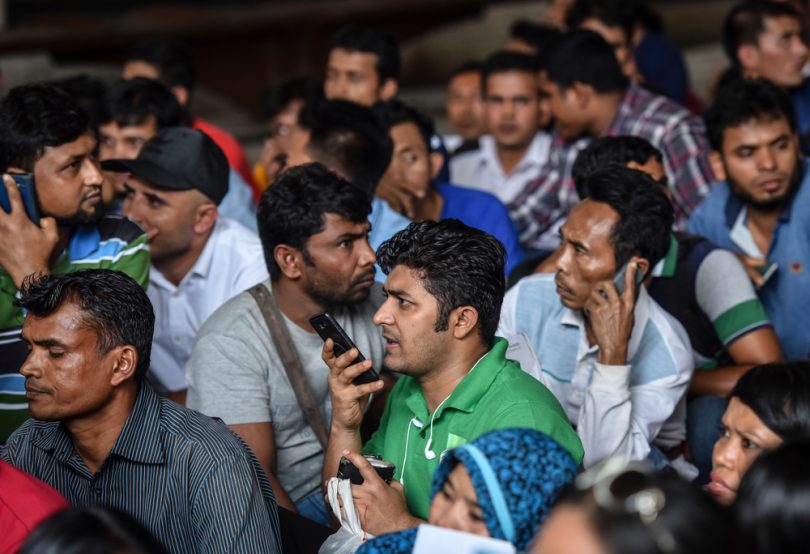 Foreign workers are arrested by the Malaysian Immigration Department during a raid in Kuala Lumpur in October 2018. Photo: Hafiz Johari

The first COVID-19 death in Malaysia on 17 March was linked to an international tabligh gathering of 16,000 missionary “Jemaah Tabligh” activists. Jemaah Tabligh originates from India and is the largest Muslim missionary group in the world, with followers in more than 80 countries and from all socio-economic backgrounds. The three-day gathering was held in the large Sri Petaling Jamek Mosque in Kuala Lumpur in late February. For almost a month afterwards, nearly half the cases in the country were traced back to this event, which contributed to five generations of infections and four sub-clusters. And they were the ones that were traced and tested – it is likely there may have been more. The gathering facilitated not only the spread in Malaysia but also elsewhere. Of the attendees of the tabligh gathering, 1500 came from other countries, including Cambodia, Thailand, Philippines, India, Australia and Canada, causing international spillover. A number of Malaysian attendees continued onwards to Sulawesi and New Delhi to attend other similar gatherings, continuing the subsequent spread elsewhere.

Yet there was more to the story. One of the hallmarks of the international tabligh movement is its efforts to recruit marginalised populations – the poor, refugees, and struggling migrant workers. The February gathering was attended by hundreds of Rohingya refugees and migrants, many of whom are undocumented and considered illegal immigrants in Malaysia. Many of the attendees lack access to healthcare or are unlikely to come forward for testing even where it is available, fearing detention or deportation if they do. The government’s inability to trace these attendees to test and provide medical care, if needed, has revealed cracks in Malaysia’s social welfare system.

Malaysia’s four million undocumented migrant workers and refugees have limited access to health or social welfare services and face additional barriers, including financial costs, if they have access at all. Many are not domiciled permanently; some reside in major cities and many in remote regions. Their living conditions are some of the poorest in the country, often overcrowded, and lacking adequate sanitation. These communities are easy victims for misinformation and fear. The pandemic is demonstrating the danger these gaps in access and services pose, not only to these vulnerable communities, but also to the wider population.

Unfortunately, early attempts by the government to reach undocumented residents have resulted in some missteps and communication failures. On 28 March the government put in place measures to distribute food and supplies to poor and vulnerable communities through district collection centers, staffed by members of the People’s Volunteer Corps (RELA) – a branch of the army. At the same time they placed a temporary blanket ban on relief NGOs providing food and support to the same communities.

The rationale was to restrict the spread of the virus through more efficient distribution of resources. However, it was apparent to many in the NGO community that there was a danger of doing quite the opposite. In contrast to local NGOs and civil society organisations that were already working with and had an existing rapport with local, undocumented migrant communities, the presence of the army at distribution points was much more likely to intimidate those fearing arrest or deportation rather than encouraging their uptake of services.

Unsurprisingly, the ban produced confusion and concern in the NGO community and within a few days, the government backtracked. The Welfare Department drew up new guidelines allowing for NGOs to continue distributing food and services to those in need, allowing the important work of more than 120 organisations such as Amal Relief and Kembara Kitchen to continue.

As a result, the government is now in much closer and more productive relationships with local NGOs such as Mercy Malaysia, which supports marginalised groups by providing medical services, and UNHCR, which coordinates with the Ministry of Health to ensure that all refugee and asylum-seeking communities are included in the government’s national response measures.

While the government’s willingness to support the provision of food and basic goods signals a positive direction in its approach to supporting the vast undocumented community, it is yet to go further and facilitate access to health services, which will ultimately be necessary during a pandemic. Malaysia ties health screenings of those without legal status to immigration services. Healthcare professionals are bound by circular 10/2001, which requires doctors to report illegal immigrants seeking health services to the police and immigration authorities. This also provides licence for authorities to detain the undocumented, as occurred on Friday. Policy directions that have been tossed around previously, such as a non-citizens’ health act, will take too long.

As Malaysia starts to relax its lockdown this week, the temporary provision of healthcare benefits to migrants, without the risk of arrest, is urgently needed, even if only as a stop-gap measure for contact tracing. Over the longer term, inclusive, non-discriminatory strategies and policies, which build on the existing relationships of the non-government sector, are essential in finding a sustainable solution for the millions in the community who fall between the cracks of the system.

Natalie Shobana Ambrose is a doctoral researcher at the tail-end of her PhD thesis on ‘ASEAN Security Management in Maintaining Peace in Southeast Asia’. She also contributes articles on Malaysia and the region through her column On Pointe published in The Sun, a Malaysian daily, and consults with The Asia Foundation in Malaysia.