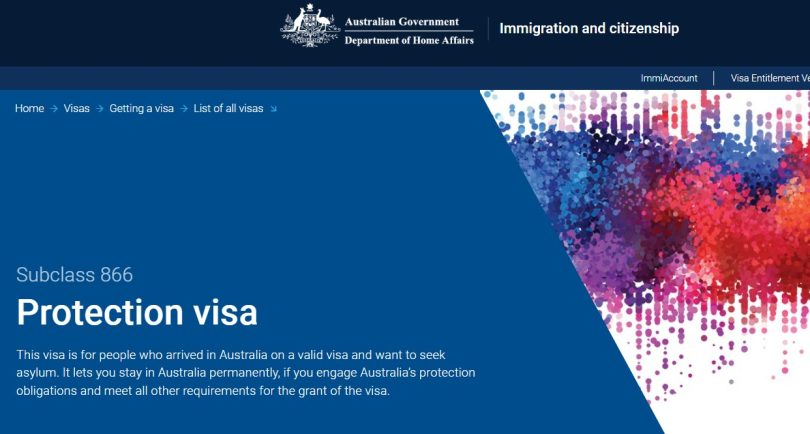 We have been talking about Pacific workers applying for asylum in Australia since December 2020, and last updated our analysis in February of this year. The last few months have seen a massive increase in the number of Pacific Islanders applying for asylum. The monthly average of Pacific applicants has increased from about 100 to above 300 new applications a month. In September, a quarter of all onshore asylum claims in Australia were from Pacific Islanders, up from 10% when we reported in February.

In Figure 1 we show the monthly numbers since November 2019 for the citizens of Fiji, Samoa, Solomon Islands, Timor-Leste, Tonga and Vanuatu. The sharp growth over 2022 is quite remarkable. 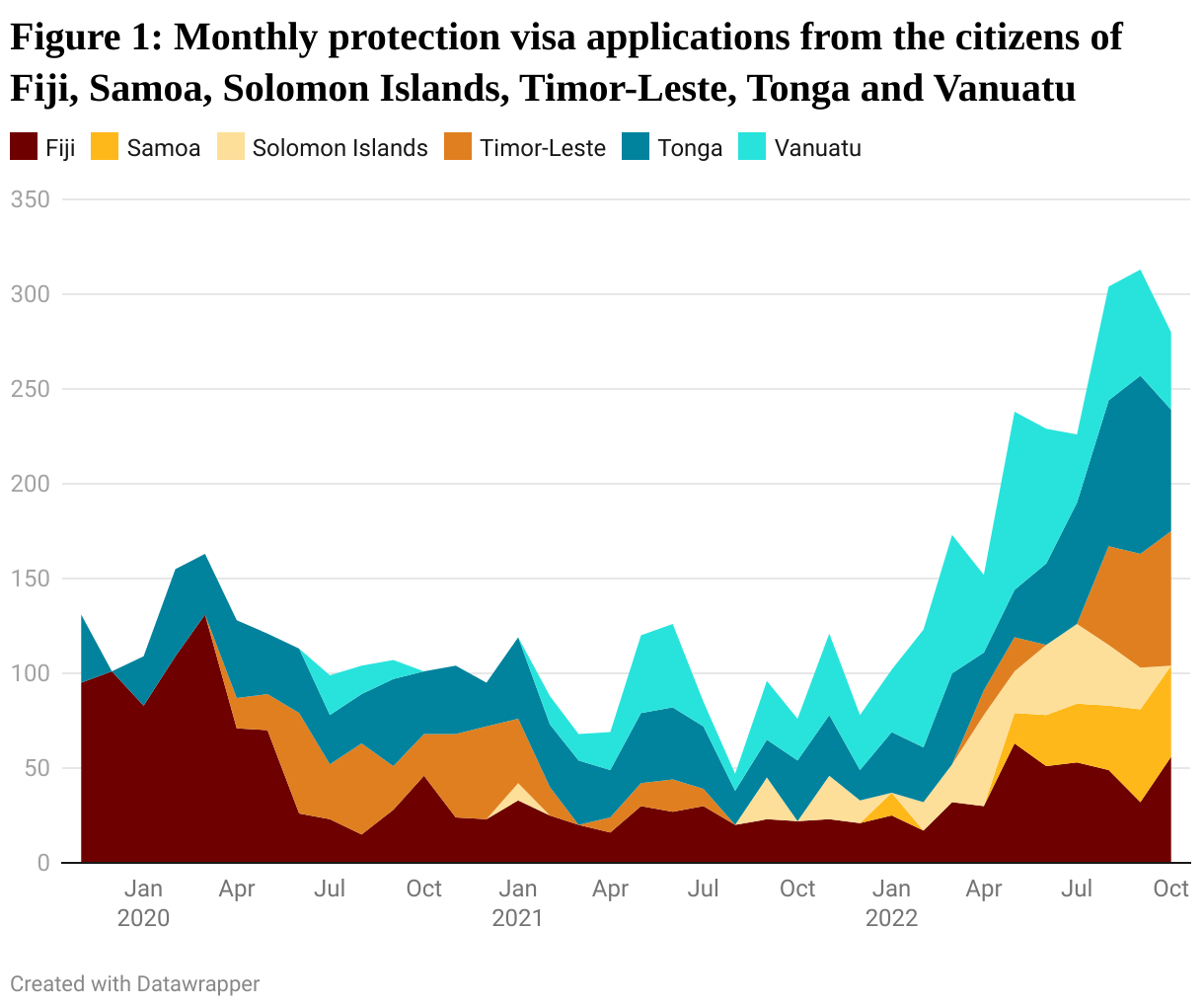 Not all of the Pacific asylum applicants would be under the two Pacific labour schemes. Fijians were in the top 10 nationalities applying for asylum before COVID-19, and most were on tourist visas. But most Pacific tourists went home during COVID-19, so most of the applicants since then would be Pacific Australia Labour Mobility (PALM) workers. The majority of the applicants appear to be temporary workers from countries without pre-COVID protection visa applications, namely Samoa, Solomon Islands, Timor-Leste and Vanuatu.

Only a handful of applicants are accepted as genuine refugees. The graph below shows grants and determinations (decisions) since monthly data became available in November 2019. Since November 2019, 4,864 onshore protection applications have been made by nationals from selected PALM scheme countries. Of the 2,060 cases decided by the Department of Home Affairs in relation to our six countries, only 43 were granted refugee status (a 2% success rate). 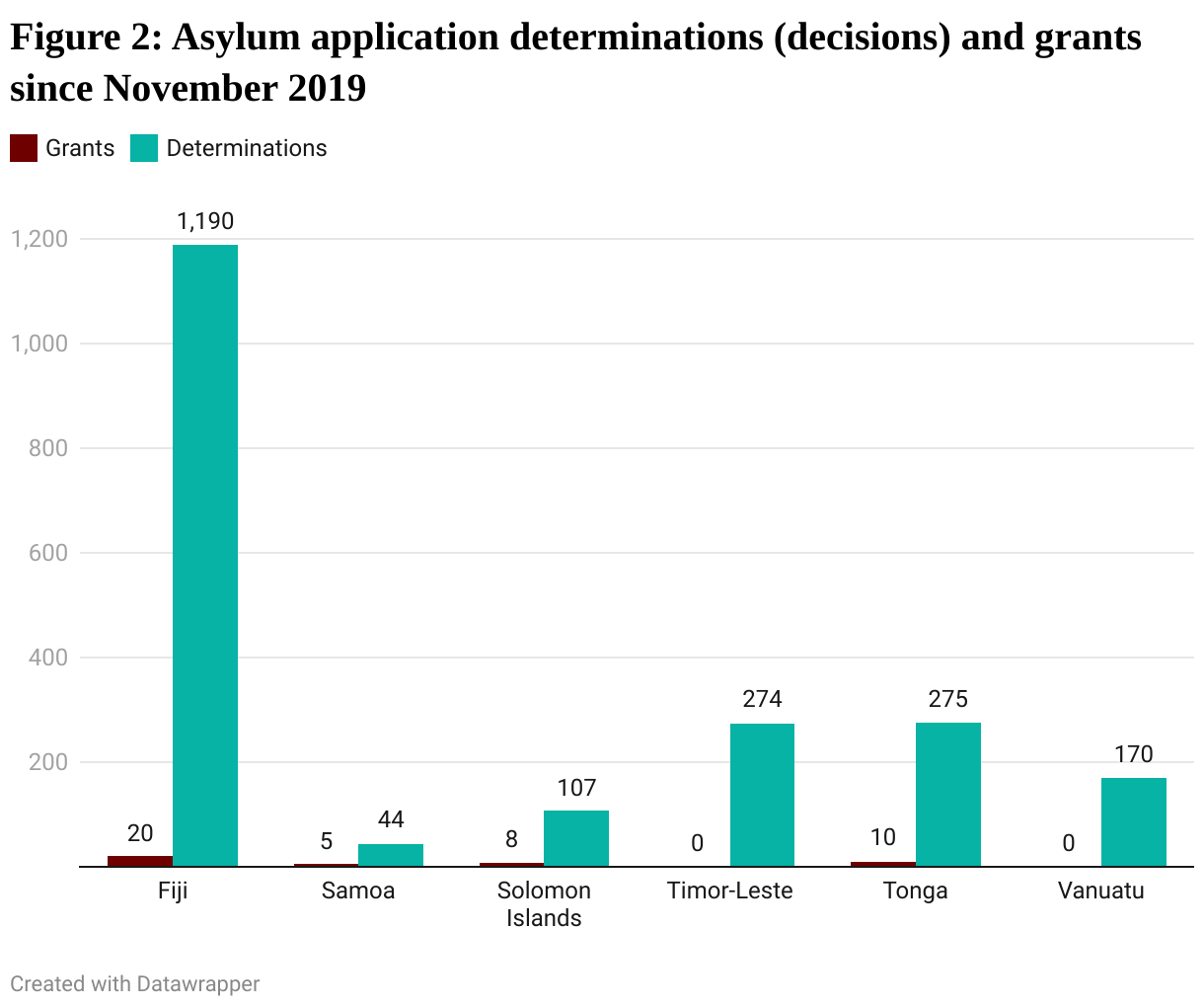 While, in the end, the applicants’ claims will almost certainly be rejected, it can take years until a final negative decision is made, especially if the applicants take their case, after being rejected by the department, to the Administrative Appeals Tribunal, which has a two-year backlog of cases.

In the meantime, applicants get a bridging visa that comes with unrestricted working rights and access to Medicare. It’s a much better deal than the two Pacific labour schemes, where workers are tied to individual employers, and must take out private health insurance.

There has been a surge in applications across most Pacific nationalities. The graph below compares monthly average applications for protection visas in the months before the COVID-19 pandemic began, with applications in the two years since, and then in the last six months. Before COVID-19, only Fiji and Tonga were significant source countries. Now all the countries shown are significant, and all show increased monthly averages in the last six months relative to the last year. 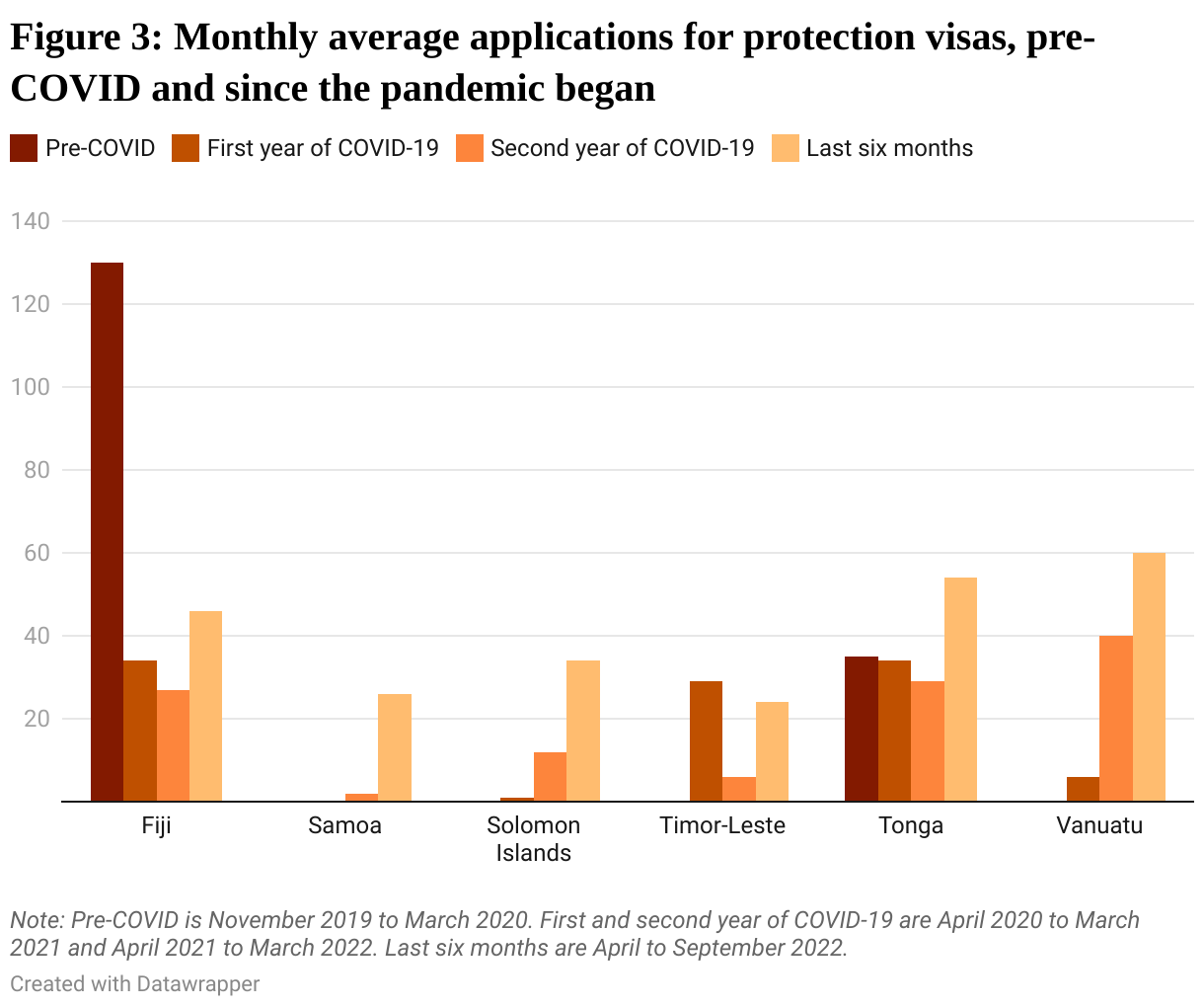 Why have the numbers gone up so sharply? There are several reasons.

First, there are more Pacific workers in Australia. Second, the ratio of applicants to workers, which had fallen last year, has risen again. Third, Pacific tourists are now coming to Australia again, and they are also a source for asylum applications. 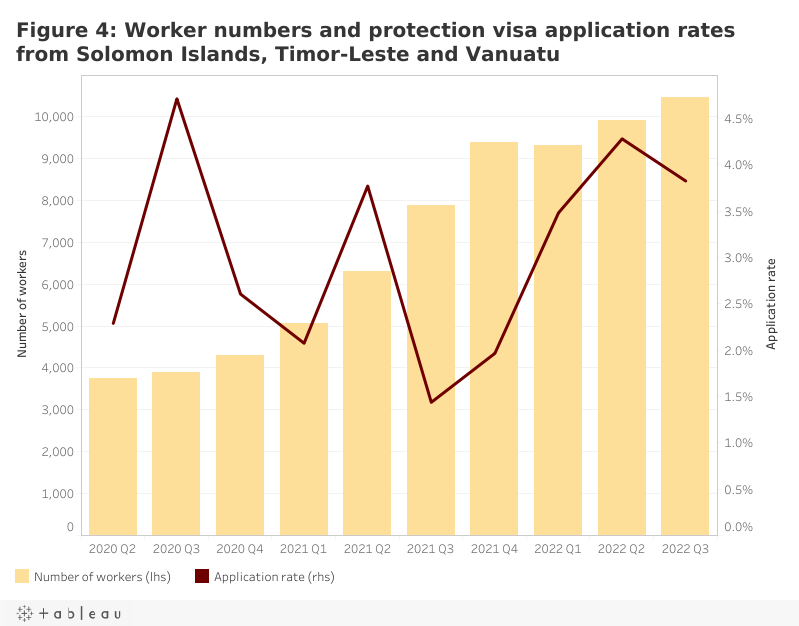 Some interpret the demand for protection visas from workers as a sign of mistreatment. Addressing “push” factors is important: workers should be well remunerated and treated. It is good the recent federal budget has allocated funding specifically for PALM for a “boost in resourcing to intensify action against unscrupulous operators”. However, even if workers had no complaints, applying for a protection visa could be a rational decision because of the benefits it brings. Pacific workers who have applied for protection visas say they value the greater flexibility and sense of agency that this visa offers.

Applying for a protection visa could be a rational decision, but many workers put in these applications on the basis of advice and paid assistance from intermediaries, with a very imperfect understanding of what they are actually doing. Media reporting has described Pacific workers losing up to $3,000 each in protection visa rorts, with a comment on a previous blog noting that some workers have paid up to $5,000.

The only way to actually tackle this problem is to process the almost invariable rejections more quickly. This requires additional resources for the Department of Home Affairs and for the Administrative Appeals Tribunal. This is a reform that will pay for itself. If processing times are reduced, applications will fall, and the additional resources need only be temporary.

This is a problem that goes well beyond the Pacific temporary migration programs. There were about 20,000 onshore applications a year before COVID-19, with the biggest source countries being China, Malaysia and India. As borders reopen, the number of applications is rising once again.

The previous government took a head-in-the-sand approach to this problem. Whether Labor will be more proactive remains to be seen.

Data notes: Papua New Guinea is not included as most protection visa claims are genuine, and the number of workers in Australia and applications are small. October 2022 data is now available. It shows a total of 280 claims from the six Pacific countries analysed in this blog, slightly down on the month before. The share of Pacific applications in the total is also down. The total number of all applications is 1,448 – the highest since May 2020. As more visa-holders from Asian countries return to Australia, protection visa applications from these countries (especially China, India, Malaysia and Indonesia) are increasing.