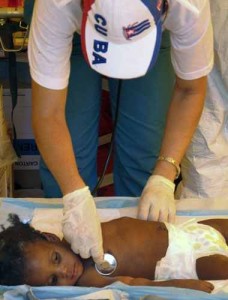 Amidst the various discussions of the most appropriate development models for the countries of the Pacific region, one model that is continuously ignored is the one being driven by the government of Cuba.  Cuba is not generally well-known as a deliverer of aid but, in the arena of global public health, the Caribbean nation has made a long-standing contribution to medical education and practice.  And Cuban engagement in the Pacific is growing rapidly.

Over the last 40 years, Cuba has provided doctors and nurses to developing countries with shortages in human resources for health.  From Algeria and Angola to Venezuela and Zambia, more than 185,000 Cuban medical professionals have served in 103 countries around the world with over 38,000 currently deployed.  At the same time, Cuba has funded and hosted more than 20,000 students from around the world to study medicine at Cuban medical schools.  The Cuban model has a fundamentally different perspective from Western medical education.  Whereas most western countries limit medical training to the high-achieving few, Cuba educates rural people on how best to serve their rural communities in the most effective way possible emphasising the health conditions that affect those communities.  The focus is on training for the equipment and realities that individuals will face when they return home to serve in districts rather than at Royal North Shore Hospital or Royal Women’s Hospital.

One of the most prominent of the Cuban engagements now is in Timor-Leste where more than 300 Cuban health workers are spread around the country and which sent 700 young Timorese to study medicine in Cuba free of charge.  Additionally, Cuba has worked with the government of Timor-Leste to set up a medical school in Dili initially with Cuban trainers.

Building on this regional engagement, over the past five years, the Cuban model has been extended to the countries of the Pacific through bilateral deals.  In response to the dramatic shortages of the health workforce in countries such as Nauru, the Solomon Islands, Tonga and Kiribati, Cuba hosted the first Cuba-Pacific Islands ministerial meeting in 2008 where collaborations in medical education were hatched.  Since then, more than 170 young Pacific Islanders (including 90 Solomon Islanders, 23 i-Kiribati, 17 ni-Vanuatu and 20 Tuvaluans) have commenced medical school in Cuba and more than 30 heavily-subsidised Cuban doctors have arrived in the Pacific to support the domestic workforce.

The increase in the number of trained doctors currently working in the Pacific and the future return of newly-trained health personnel has and will continue to improve health outcomes in the Pacific.  Some reports have cited an 80% drop in infant mortality in one part of Kiribati and 53 lives being saved in Tuvalu.

But the picture is not always rosy.  There have been critiques regarding the language skills of the Cuban doctors and their ability to treat locals in the Solomon Islands and Nauru and concerns about the competencies of the returning doctors.  As is to be expected, existing medical associations made up of those trained at the Fiji School of Medicine, University of PNG, and in Australia and New Zealand have been cool to the arrival of this considerable new cadre.

There are real concerns about how the returning doctors will be integrated into the existing workforce and into national budgets.  In the Solomon Islands for example, adding 90 more doctors to the workforce over the next few years represents a doubling of the number of physicians and therefore the salary base.  Doctors are also entitled to housing yet no accommodation has been constructed nor has a supervision or deployment plan been developed.  For all the countries of the Pacific, this fits into a wider question of human resource planning.

The Howard government viewed Cuban engagement in the Pacific warily through a dated Cold War lens but, to its credit, the current government has decided to engage with Cuba and Pacific partners to align medical education and health sector support.  The Parliamentary Secretary for Pacific Island Affairs Richard Marles travelled to Cuba last year and AusAID has commissioned a team to examine how best to develop an appropriate partnership.

The opportunities are considerable.  Cuba has developed a globally-recognised expertise in medical education and the Cuban model emphasises scale: not training one or two health workers here and there on various scholarships (as Australia normally does) but supporting significant enough numbers to have a catalytic impact on human resources for health.

The Pacific is no longer Australia’s backyard and other partners have interesting and diverse skills to bring to the table to promote the development of the region.  The Cuban partnership represents an important opportunity to improve the health of the people of the Pacific.

Joel Negin is a Senior Lecturer in International Public Health at the University of Sydney and a Research Fellow for the Menzies Centre for Health Policy.