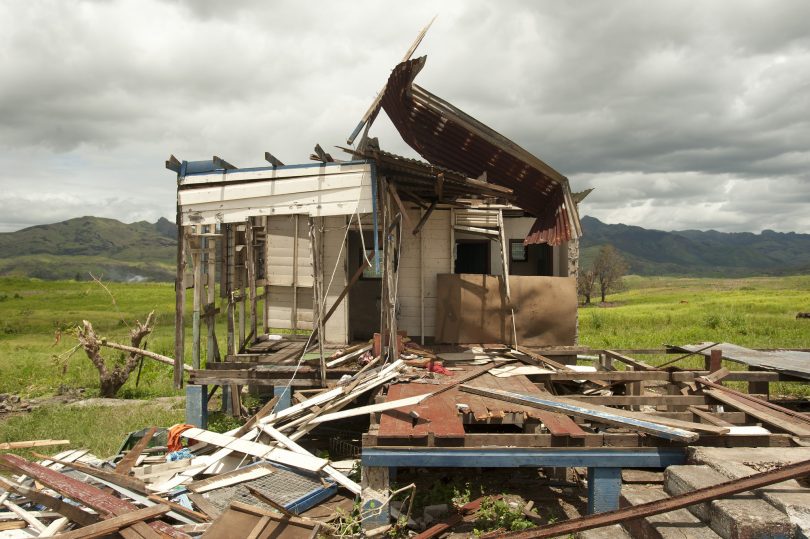 Some of the destruction wrought by Topical Cyclone Winston along Kings Road on Viti Levu, Fiji (Flickr/UN Women/Murray Lloyd/CC BY-NC-ND 2.0)

Last month, after Tropical Cyclone (TC) Gita devastated Samoa with severe flooding, it made an unexpected turn and hooked back towards Tonga. I happened to be located in Tonga at the time and my usual sense of calm quickly vanished as the system strengthened from a Category 2, to a Category 3, and ultimately a Category 4. As I frantically stocked up on bottled water and food supplies, I was struck by the sense of calm that permeated the streets of Nuku’alofa as this system was rapidly approaching – many locals were drinking their morning coffees at Friends Café, reading the daily newspaper, or walking the waterfront path that lines Vuna Road. Some had lived through TC Isaac in 1982 or been impacted by TC Ian in 2014, so knew what to expect.

Pacific Islanders are certainly no strangers to natural disasters. If you rank countries globally by their level of natural disaster risk, all Pacific Island countries – aside from Samoa and Kiribati – sit on the dangerous side of the distribution (see Figure 1). Globally, Vanuatu sits at the top of this index with the highest level of disaster risk of any country in the world, whilst Tonga (2nd), Solomon Islands (6th) and Timor-Leste (10th) fall within the top ten. This exposure to natural disasters leads Pacific Islanders to have a higher level of resilience, one necessary to withstand such devastating and repeated shocks.

Figure 1: the Pacific region faces the highest level of natural disaster risk in the world

TC Gita ultimately passed directly to the south of Nuku’alofa and severely impacted large parts of the main island, Tongatapu, and neighbouring ‘Eua. The following morning, before the cyclone had fully cleared, Tongans were out on the road clearing the debris from the night before. The response from the people and Government of Tonga was swift. The UN Humanitarian Cluster system was quick to activate and the major donors provided rapid assistance. However, one element of the response was particularly noteworthy: the Government channelled nearly a million Tongan Pa’anga ($A500K) through their Social Welfare Scheme for the Elderly and Disability Benefits Scheme – the Government’s two core social protection programs. These are two vulnerable groups that weren’t in a position to rebuild the following morning. The cash was quick to be disbursed, given the programs are already operational, and provided funds for their immediate post-disaster needs. The financing was provided by the Australian Government, but drawing on the Government’s SP systems.

This was only the third time that social protection programs have been used for disaster response in the Pacific region, but already there is a strong body of evidence building around the impact this type of response can have. In 2016, following TC Winston, Fiji channelled post-disaster top-up cash transfers through its existing social protection programs. An impact evaluation carried out by the World Bank and the Fiji Bureau of Statistics, which was funded through DFAT and released as a Devpolicy Discussion Paper, showed that three months after the cyclone took place, beneficiaries were more likely to have recovered from the shocks they faced, relative to comparable households that did not receive the additional assistance. This includes having recovered from sickness or injury, repaired their dwelling, replenished their food stocks, remedied the damage to their agricultural land, and repaired village or neighbourhood infrastructure.

Figure 2: beneficiaries of shock-responsive social protection are quicker to recover 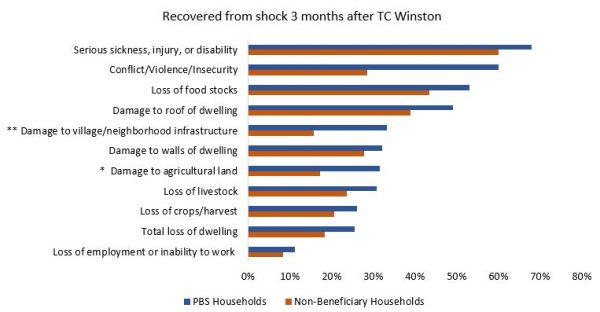 Many beneficiaries referred to the top-up cash transfers in Fiji as manna from heaven – both unexpected and hugely beneficial. For the Government of Fiji, this was a well-planned and considered response. Fiji’s social protection system has been built over many decades and contains a reliable registry of the poorest and most vulnerable households. Meanwhile, natural disasters will continue to impact large swathes of the population in any given year. Using these systems, which effectively provide assistance to vulnerable populations in normal times, makes even greater sense in the wake of a shock.

The lessons learned from Fiji and Tonga are of great interest to policy makers from across the Pacific. This week the World Bank is jointly organising a conference on shock-responsive social protection with the World Food Programme and the Government of Fiji from March 20th–22nd in Nadi, which is being supported by DFAT. The conference is bringing together a set of stakeholders from Pacific governments, provident funds, NGOs, and civil society, to set an agenda on the role that social protection, including cash transfers, can play in disaster response. Natural disasters are here to stay, but this type of manna from heaven may well provide a guide as to how Pacific Island governments can help the most vulnerable help themselves.

An earlier version of this blog post incorrectly stated that TC Ian occurred in 2012.