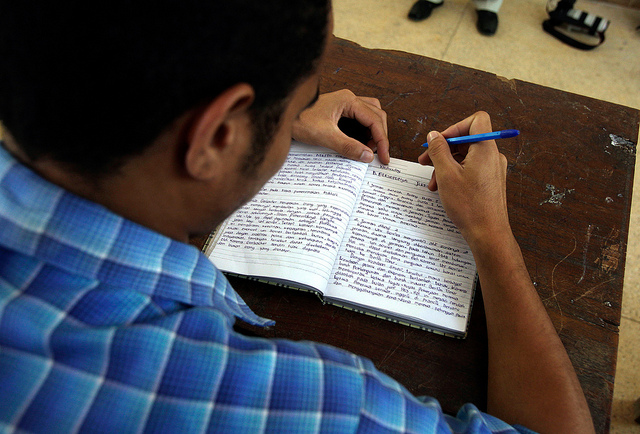 The first Sustainable Development Goals (SDGs) Report released on July 19 by UN Secretary-General Ban Ki-moon outlines some important points about how the benefits of development are not equally shared, but it also highlights the importance of data.

The Goals were launched only seven months ago, but Ban Ki-moon has raised an important point about what is needed to move forward in our achievement of the SDGs. To know where we are at now, we need baseline data. To be able to track how we are doing on the path to the end goals of the SDGs, we need data. To know if we are achieving them, on target, or even off target and going backwards, we need data. The media attention grabbing points from the report, such as that “13 per cent of the world population still lives in extreme poverty, 800 million people are suffering from hunger and 2.4 billion live without improved sanitation” all require immense amounts of data from around the world.

Much of the data that we need and that is being stated in reports now was captured for the Millennium Development Goals (MDGs), which should assist in many cases with establishing a baseline. However, there are several problems to overcome. Firstly, the data gathered for the MDGs is not always aligned with what we will need for the SDGs. There are nine more SDGs than there were MDGs, 151 more targets, and 182 more indicators that we require baseline data for.

However, data quantity issues aside, the bigger problem that we face is of data quality. Not all the data we need as a baseline for the SDGs is reliable, it is often not disaggregated, and much of this data is not freely or widely available and accessible for those who will be working together to achieve the SDGs.

Vast amounts of required information on certain countries is not available, particularly from countries or parts of countries going through political or civil unrest, when census data gathering and surveys are not carried out for long periods of time. In stable, peaceful countries, data may be inaccurate if census collectors or surveyors are poorly trained, and/or the information they collect may not be accessible if governments do not transfer all the information onto their website or make it available to the UN.

The UNESCO Institute for Statistics (UIS) site is a good starting place in terms of finding basic data. However just by looking at something simple such as adult (15 years+) literacy rates (defined as the ability to both read and write, with understanding, a simple statement related to one’s everyday life) for both sexes, you can see the missing data at a glance. In the Pacific, for example, there is no data for the Cook Islands, Fiji, French Polynesia, Kiribati, Nauru, or Tuvalu at all, in any year. For Solomon Islands there is information from 1999, but no follow-up information to chart progress over time.

If the basic data on adult literacy is not available, you can be sure that there is no disaggregated data available either. A crucial aspect of the SDGs is the notion of ensuring that no one is left behind, and as Ban Ki-moon emphasises, in order to know whether or not someone or a particular group is being left behind, the data needs to be disaggregated. We need data on women, children, persons with disabilities, refugees, and other groups.

There are also questions regarding the data that is available. When I look at countries I am familiar with, such as Timor-Leste, I have to question the accuracy and validity of the data. For example, the UIS database reports that in 2015 +-64.07% of Timorese adults were literate. This seems a little high when three years earlier, in September of 2012, a survey of the Lautém District of Timor-Leste that I was involved in showed only 40.6% of self-assessed respondents thought that they were literate (when tested 33.1% were shown to be literate; 13.5% were semi-literate and 53.4% non-literate).

It is possible that literacy in Lautém District is significantly lower than other districts and thus the national average. But the data collection methodology may also be responsible for this apparent significant difference. It seems that in the 2015 census, which involved self-assessment only, people overestimated their abilities. This is possibly because it is the head of the household (normally male) who declares the literacy of his family (as per the UN guidelines [pdf]), whereas in the 2012 Lautém District survey each member of the household was asked separately and tested, which may have revealed lower actual literacy rates, and rates which differ among sub-groups such as women, the elderly, and similar.

The problems of self-assessment data are part of a larger discussion, but I highlight it to raise some important – but often overlooked – issues surrounding the quality of baseline data. In terms of policy and program planning we need to know where the money and time most needs to be invested. We can guess that literacy may be lower than what the numbers from the self-assessment show — that literacy may be lower for those based in rural areas, for women, and for those who were school age during the Timor-Leste conflict period of 1974–1999. However, without disaggregated baseline date, we are only guessing. Furthermore, it will be difficult to judge the success of any policies or programs in implementing the SDGs, in particular whether ‘a substantial proportion of adults, both men and women, achieve literacy and numeracy’ (Sustainable Development Goal 4, indicator 6), unless we have the current data on the proportion who are currently illiterate, and which sectors of society have so far missed out on the benefits of development.

It would be ideal to have this baseline data as early as possible into the implementation of the SDGs, and at seven months since the launch it should be a current focus for governments and the UN.