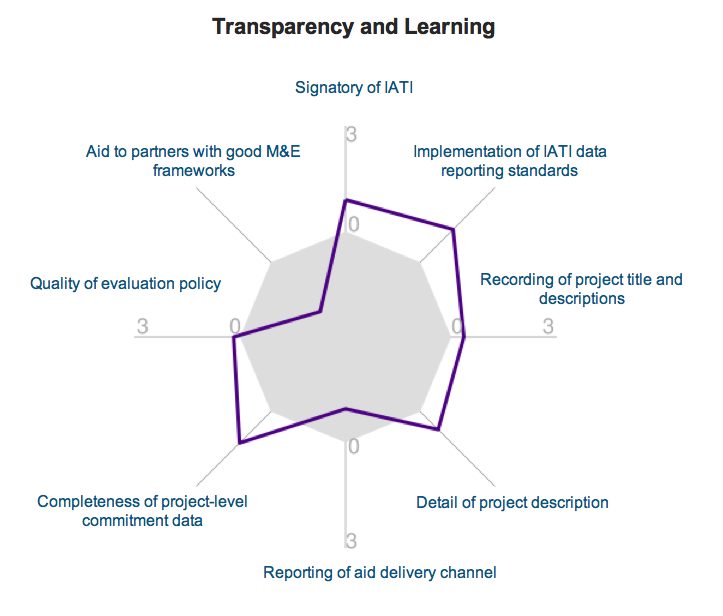 Australian aid has tumbled from a transparency darling to a disappointment in newly released rankings. But where does Australia’s true performance actually lie?

In an earlier post for Devpolicy, Jonathan Pryke suggested that the 2010 Quality of ODA Assessment (QuODA), which ranked Australia first out of 31 DAC members for transparency and learning, overestimated Australian aid transparency. He’s since been vindicated by a slip to ninth place for transparency in the follow-up 2011 QuODA. Even more discouraging were the results of the 2011 Pilot Aid Transparency Index released this week by Publish What You Fund (PWYF), which placed Australia a ‘poor’ 36th out of 58 donors. This post will examine the reasons for this fall from grace and whether AusAID’s new Transparency Charter can improve future performance.

The Aid Transparency Index is constructed by surveying what information is actually available on a donor’s website. To assess the quality of country-specific information, each donor’s largest aid recipient is used as a case study — in AusAID’s case, Indonesia. The seven organisational level, four country level and 26 project level indicators are scaled to give each level equal weighting. Australia was praised for having a Freedom of Information Act and publishing results to the International Aid Transparency Initiative (more on IATI in a moment) but otherwise AusAID scored only three points (for `always publishing’ a procurement policy, country strategy and tender documents). The other 32 types of information sought are ‘sometimes published’ and ‘not published, but internally collected’ — neither of these outcomes are awarded any points by PWYF, resulting in AusAID’s poor score of 26%.

In comparison, Lithuania comes in slightly ahead of Australia with a score of 27%, despite not collecting any information for 10 of the indicators. Similarly, the Czech Republic scores 36% despite eight ‘not collected’ results and France scores 31% with 12 ‘not collected’s. What is happening? The index only rewards an agency if it always publishes the information required by the indicators. Lithuania, the Czech Republic and France engage with far fewer indicators than Australia, but when they do collect the relevant information they tend to publish it for all projects. AusAID has better data collecting and reporting frameworks in place than its low score would suggest — it now simply has to ensure these standards are applied across the board, with information published for all activities in English and local languages.

The Quality of ODA Assessment, conducted by Brookings and the Centre for Global Development, has four dimensions, but for this post we will focus on Transparency and Learning. In 2010, Australia was ranked first in this area, but this year has slipped to ninth. This does not reflect a true worsening of transparency. Rather there was an error in the code used to calculate the 2010 rank, which was corrected this year. Australia’s performance in this area is neatly summarised in the below graphic.

The further a spoke from the centre, the better the performance, with the grey area indicating below average scores. Quite clearly, two areas are dragging down Australia’s ranking:

Outside of AusAID, Australian companies working in developing countries have also been under the microscope recently. The newly released Bribe Payers Index (BPI) compiled by Transparency International puts Australian companies at a quite a respectable sixth place out of 28 countries for being least likely to bribe. The BPI draws directly from a survey of 3,016 senior business executives in 30 countries. This makes the index more sensitive to perceptions about bribery and high profile cases than a measure of the actual number of bribes paid. Michael Ahrens of Transparency International points out that ‘a lot of damage was done by the scandal surrounding certain members of the Australian Wheat Board and their conduct in Iraq…which saw Australia fall from being ranked first on the BPI in 2002 to eighth in 2008.’ Improving Australia’s performance in this index may be more about time and public forgetfulness than the honesty of businesses.

Australia is also taking the lead in transparency at home, having recently decided to trial the Extractive Industries Transparency Initiative. AusAID is also encouraging other countries to do so through its new Mining for Development Initiative.

What conclusions can we come to after studying this dizzying array of new transparency rankings and indices? Australia’s transparency situation is not as dire as the recent rankings suggest, and is probably set to improve.

In his blog post in October, Jonathan Pryke called for ‘not only making data available online but making it easily accessible and useful’, citing USAID’s dashboard as a good example. If all of AusAID’s improved country pages are as comprehensive as the newly live pages for Vanuatu and the Philippines, he may just get his wish —  the new country pages feature attention-grabbing graphics and significant documentation. These new webpages are part of the first installment of AusAID’s new Transparency Charter, a commitment to publish detailed information, with local language summaries, in a timely and useful fashion. This charter also involves fully participating in the much-hyped International Aid Transparency Initiative (IATI) which is a commitment to future transparency and publishing project level data on the IATI website at half-yearly intervals. AusAID’s first submission is available online, however it consists only of reports already in the public domain and requires tools which are still under development to usefully read.

Australian aid is more transparent than recent ranking suggest, and is set to improve if AusAID meets the commitments outlined in the Transparency Charter in a timely manner and efforts to publish more reports and information sustain momentum over the long term.

Update: AusAID should be credited for recently submitting more material to IATI, which includes new data in a readable format.

Kathryn Zealand is a Researcher with the Development Policy Centre.