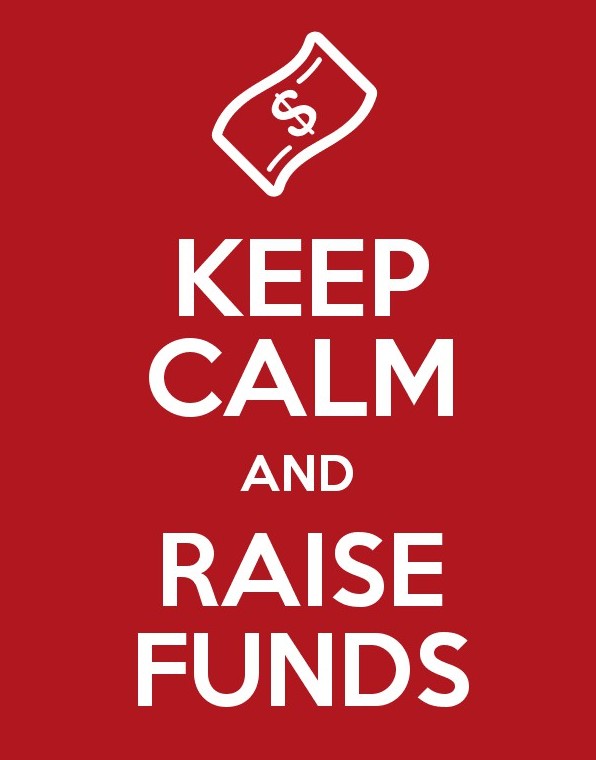 In our previous post we took a look at how Australian development NGO expenditure has changed over the last decade, focusing in on the dramatic increase in fundraising expenditure. At the aggregate level, the recent rapid scale-up in fundraising effort has not been matched by a commensurate increase in public giving to NGOs. Fundraising efficiency has declined: since 2006/07 public donations received for each fundraising dollar spent has fallen from $8 to $5.30.

These figures say nothing of how individual NGOs are performing. In today’s post, we’ll take a look at the fundraising patterns of these individual NGOs. Readers can also explore the expenditure and revenue of individual NGOs over the past decade for themselves in the interactive dataset available at the end of this post.

The key variable that we focus on in this post is the ratio of funds raised to fundraising expenditure. This is commonly used as a metric of NGO performance, for example, here. This is dangerous. We would all like as much of our donated dollar to reach the poor as possible. Everything else being equal, less expenditure on fundraising is better. But everything else is not equal. If our donated dollar was spent entirely on fundraising, and raised $1.10, we should be happy, provided we are convinced that $1.10 would not have otherwise been received by our good cause, or anyone else’s. 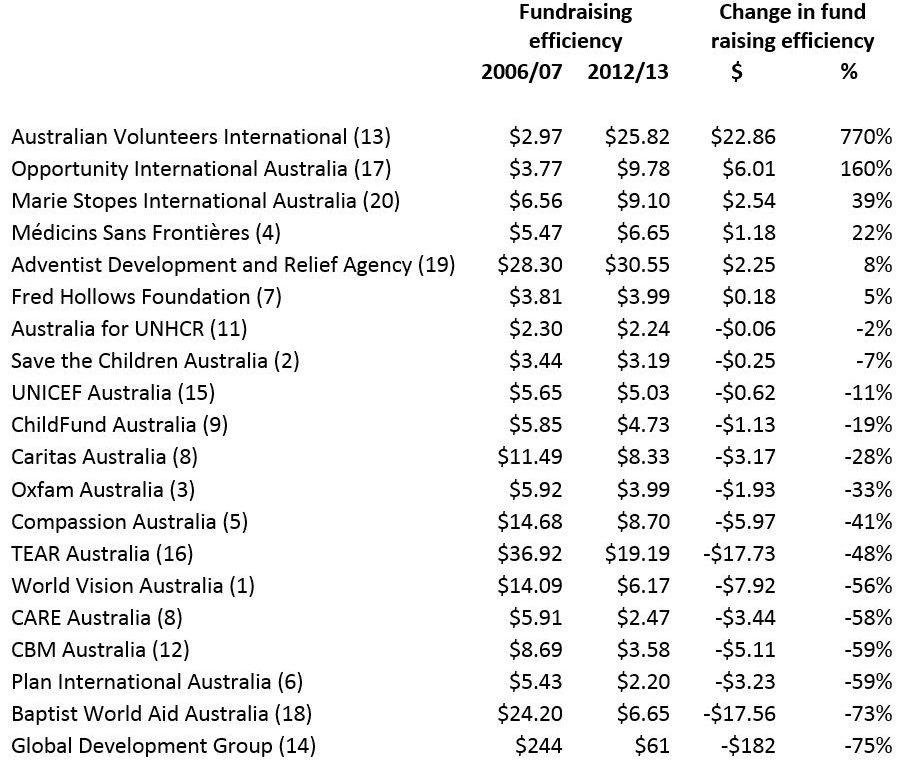 Note: The numbers in brackets represent the NGO’s 2012/13 rank with regards to total revenue. Data for Marie Stopes International was unavailable for 2006/07, so an average of public donations and fundraising costs from 2004/05 and 2008/09 (the next available years of data) has been used.

The first point to make about this table is that there are some odd results. That’s partly because of the way we’ve chosen our sample of NGOs: the top 20 in total income rather than public donations. One of those, Australian Volunteers International (AVI), receives less than 2% of its total revenue from public donations. We can ignore its fundraising numbers. The diversity among NGOs is also clear. As predicted, church-based NGOs have higher fundraising efficiencies than secular ones.  But there are idiosyncratic factors as well. Look at Global Development Group (GDG). It provides tax deductibility to smaller NGOs associated with it. Much of the fundraising work is done by those smaller NGOs. No wonder GDG has such low fundraising costs itself.

These caveats aside, the table does have some clear messages. Most NGOs are having to spend more to raise funds from the public. Only six of the top 20 NGOs (and two of the top 10: MSF and the Fred Hollows Foundation) have seen an improvement in their fundraising efficiency. MSF is a clear success story, with a 22% improvement in its fundraising efficiency, as well as a massive increase in funds raised (not shown in the table, but 68% or $27 million).

More analysis is needed, and is being undertaken, but clearly it is a tough world out there for most development NGOs, trying to raise funds from the Australian public. 14 out of the top 20 have seen their fund-raising efficiency decline since 2006-07, 12 by more than 10%, and 10 by more than 20%. What to do? Mergers and acquisitions might sound like a way forward, but are a path closed off to most NGOs, who are part of international federations, and need to keep their brand.

Interestingly, the rising cost of raising funds is becoming a subject for NGO discussion and debate: for example, see these blogs (here, here and here) from the UK. We don’t have the answers, but we hope the analysis is helpful.

Jonathan Wilson is completing a Master of International and Development Economics at the Crawford School of Public Policy, and interned with the Development Policy Centre in 2015. Jonathan Pryke is a Research Fellow in the Myer Foundation Melanesia Program at the Lowy Institute. Stephen Howes is Director of the Development Policy Centre. The first part of this analysis is available here: this post also has more notes on the data. The underlying dataset and all calculations are available here.

Jonathan Wilson interned at the Development Policy Centre in 2015 through the Australian National Internships Program (ANIP), researching the economic determinants of public giving to Australian NGOs. He also worked as a Research Assistant at Devpolicy in late 2015, providing support with data for the Australian Aid Tracker.