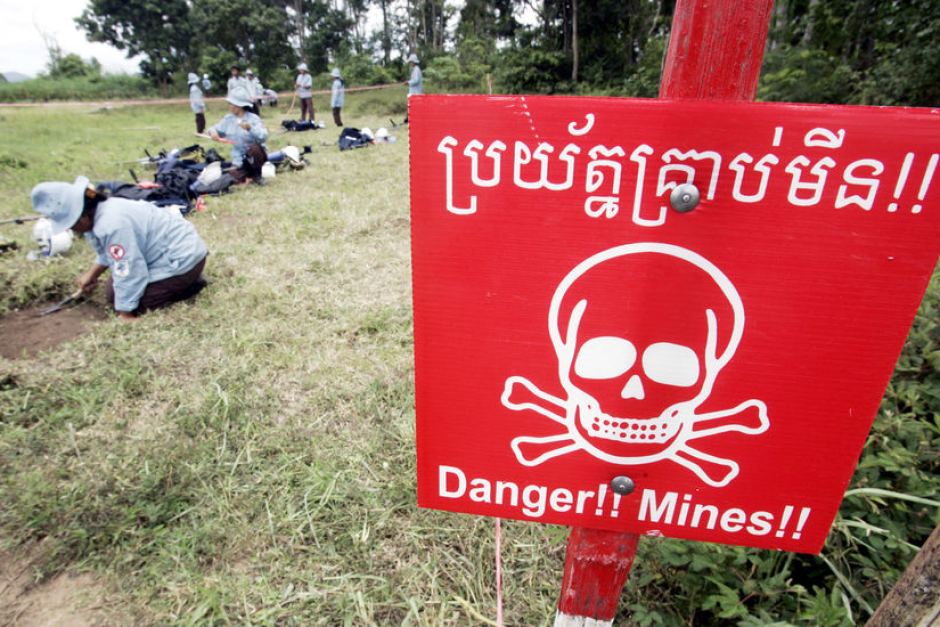 On the evidence available it seems that Australia’s commitment to removing landmines and other unexploded remnants of war in developing countries is in dramatic decline.

The last comprehensive report [.doc] on Australia’s funding for mine action through the aid budget was published in 2013. We have found it very difficult to obtain information on the level of Australian government support for mine action since that time.

This is of course an issue for those concerned about aid information transparency.

However, we have been able to put together what we believe is probably an accurate enough picture of the situation in recent years.

Once the outline of the situation emerges, so does the reason for its invisibility. The information we have compiled paints a very sad picture of Australia’s recent contributions to this important humanitarian task.

When Australia attended the Cartagena Summit on a Mine-Free World in December 2009 we were recognised as one of the world leaders in the area. This is not the sort of high-profile, glamorous activity that generates photo opportunities for ministers, or UN Security Council votes. But it is important humanitarian work of which Australians have a right to feel proud.

Though it is hardly recognised in Australia’s current strategy for supporting disability-inclusive development in Australia’s aid program, the fact is that landmines and other unexploded remnants of armed conflict continue to kill or maim thousands of civilians each year, of whom some 40% are children.

It was evident in Colombia, as it is in Cambodia and Laos, that there is also a serious national economic development aspect to the work. As land is cleared, it can again be released for productive agricultural activity rather than lying idle behind warning fences.

But anyone who has visited a factory manufacturing artificial limbs for the victims of landmines and the explosive remnants of war, or has seen rehabilitation centres for the victims, would appreciate the humanitarian imperatives. Australia was funding these types of activities, and we were preventing death and disability as well as aiding those who were suffering disabilities as a consequence of landmines or the like.

Whatever views one holds about the priority which should be given to aid, it is hard to imagine anyone seriously arguing against money being spent to remove landmines and other explosive remnants of war or to assist the victims of these dreadful legacies of wars. Many of them are wars that we have forgotten. But the legacy remains long after the war is over.

Let’s look at the specific information which appears to demonstrate the depressingly precipitate decline in Australia’s commitment, both in absolute and relative terms.

As a starting point, the chart below illustrates the pattern of annual Australian aid spending in this area over the past six financial years. This draws on activity-level data reported by the Department of Foreign Affairs and Trade (DFAT) in accordance with its obligations as a member of the International Aid Transparency Initiative (IATI). 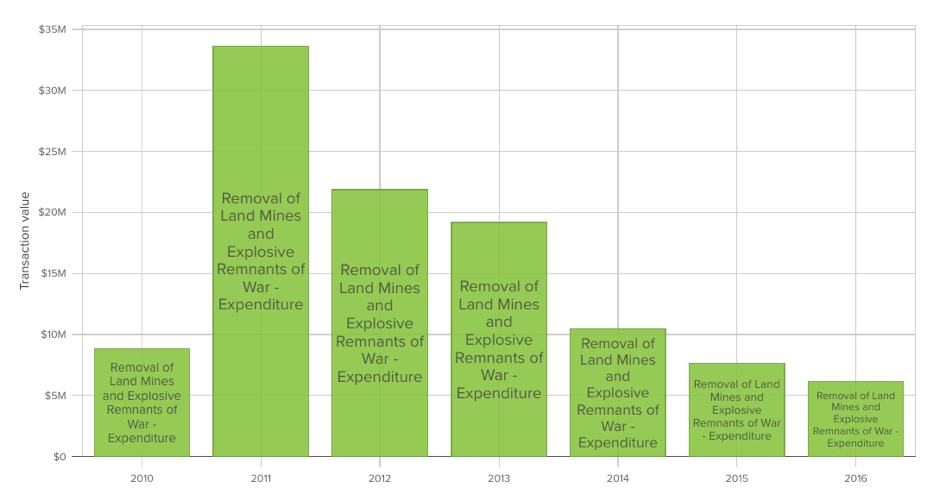 Source: DFAT activity data drawn from IATI reports. DFAT itself, as one of us has complained on this blog, does not present IATI data in digestible form, so we have used a third-party tool, the IATI Studio Chart Builder, to extract and display the annual expenditure information. The chart can be accessed and manipulated directly here.

We caution that the above chart, while presenting a broadly accurate impression of the overall decline in funding, appears systematically to understate Australian expenditure, probably by around $30 million over the whole period in question. For example, expenditure to the end of 2014-15 sums to only $102 million, but DFAT has stated it to be $125 million over the period 2010-2015, a figure we have no reason to doubt.

The discrepancy just mentioned appears to result from a coding glitch that makes support for global and multilateral mine action programs invisible to some IATI portals. The missing activities can, however, be unearthed individually using one such portal, D-Portal. We have put all these, together with all the country-specific activities supported by Australia in recent years, in this spreadsheet.

The spreadsheet, containing 61 activities, gives what we think is the most complete possible picture of Australian funding for mine action over the past six years or so. While it does not support a derivation of annual expenditure totals, it shows that aggregate expenditure was $135 million, which is consistent with the $125 million figure stated by DFAT, allowing for some additional expenditure in the first half of 2016.

As can be seen from the spreadsheet, it appears to be the case that there have only been five activities to which funds have been committed since the change of government in 2013. None of these is new. They are all continuations, sometimes at a reduced level of commitment, of activities previously under way and covered by the report published in 2013.

The only “new” activities are a review of the 2010-2015 Mine Action Strategy which has been paid for, quite some time ago, but not released, and a $6,000 promotional display.

What about Australia’s performance in relative terms over recent years? The 2015 edition of the Landmine Monitor contains useful information on this point for the calendar years 2010-2014, which we present below (somewhat rearranged and augmented to highlight rankings).

As this table shows, Australia ranked a creditable sixth among donors for the whole period 2010-2014, and in 2011 ranked third. By 2014, however, Australia had fallen to 14th place. Our ranking is unlikely to be much improved when the 2015 statistics become available later this year.

Of course even the best-intentioned activities need to be efficient and effective. If there is evidence that our activities in this area have not met these criteria, it has not been made public.

As noted above, the review of the 2010-2014 Mine Action Strategy has not been released. However, we do have – courtesy, again, of this public statement – an instructive quote from its findings:

[the strategy] has been effective in improving the quality of life for victims and reducing the number of deaths and injuries from landmine, cluster munitions and other explosive remnants of war. Australia’s work to synergise its strategy for inclusive development with victim assistance has been highly commended. … Respondents also indicated that Australia has made a significant contribution to the sector, in particular through its focus on capacity building of countries and its effective leadership and advocacy at the international level.

Reports on previous activities, such as that on activities supported in 2012-13, tell a similarly positive story.

For example, the UN Development Programme (UNDP) program to which we contributed in Cambodia reported that, in 2012, 13.8 million square metres of land were cleared and/or released for community use. It was estimated that 80% of cleared land was being used for agricultural or housing purposes. Furthermore, a 45% drop in casualty rates was reported.

This seems on the face of it to be a worthwhile outcome.

The information we have assembled appears to tell a disappointing and inexplicable story of declining commitment. To be able to judge whether this appearance reflects the real situation it would be necessary to have:

What is needed above all is a clear and unambiguous statement by the Minister of her ongoing commitment to this important work, backed up by significant funding for both the removal of mines and explosive remnants of war, and assistance to the innocent victims.