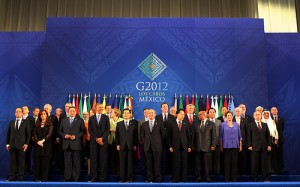 The 2012 G20 leaders’ summit, this year in Los Cabos, Mexico, was once again dominated by the Eurozone crisis. Development issues feature strongly towards the end of the 85-para communique under the three priorities of the Mexican Presidency –  food security, infrastructure, and green growth – but, with a few exceptions, appear to contain little new. Earlier G20 assurances that aid commitments would be honoured are missing. The innovative financing agenda for development (taxes on financial transactions etc.), heavily promoted by France as G20 President in 2011, appears to have been dropped.

Emerging economies announced that they will be digging deep to boost the IMF firewall, bringing together some $US95.5 billion in new money to the table for the IMF during the G20 summit in Mexico, pushing the amount raised for the IMF beyond its $US430 billion target to $US456 billion. In return, the emerging economies are demanding an increased say in IMF decisions, with a G20 commitment in the final communique to implement “in full” IMF voting reforms by October.

The communique endorses the AgResults initiative, launched by the Prime Ministers of Australia, Canada and the UK in Los Cabos on 18 June. This is  an initiative to enhance food security and food safety, increase smallholder incomes and promote better health and nutrition in developing countries by stimulating private sector innovation. With funding of up to $100 million from Australia, Canada, the UK, the US, Italy and the Bill and Melinda Gates Foundation, AgResults responds to past calls from G20 leaders for the development of innovative, results-based mechanisms (termed “pull mechanisms”) in agriculture.

Australia coordinated the development of an overarching concept note [pdf] on the initiative – with this work undertaken by Robin Davies, a Visiting Fellow at the ANU Development Policy Centre.  AusAID’s Hot Topic piece on the launch of AgResults is here and the relevant World Bank web page is here.

– Cicero Lucena and John Gummer discuss the true legacy of the original earth summit in 1992.

– Elinor Ostrom, on the day she passed away (see a great obituary here), wrote an opinion piece on the challenges Rio+20 is addressing.

– Manish Bapna, writing for the World Resources Institute, discusses what an important opportunity this year’s conference is. WRI is also providing comprehensive daily updates of Rio+20.

– Nathan Hultman, writing for Brookings, discusses the prospects of the conference.

– In a recent post and discussion paper Devpolicy’s Robin Davies reviews the reports that were influential in shaping Rio’s agenda in 1992 and today.

– The draft text for the agreement to come out of the summit as of 2nd June.

– Australia’s official agenda for the conference.

Global remittances on the rise

According to a new report published by the World Bank (available to preview online here), foreign workers in 2012 will remit about $399 billion in 2012, compared to $372 billion in 2011. Remittances have shown remarkable resilience throughout the GFC as foreign investment plummeted and ODA remained flat.

Resilience of remittances compared to other financial flows to developing countries 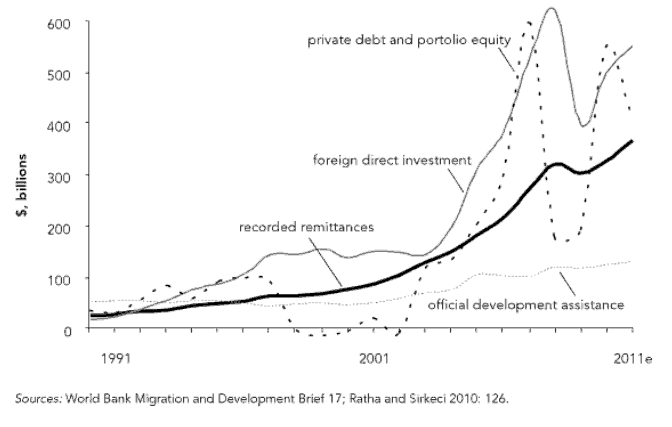 In this recent World Bank blog Shanta Dearajan takes a look at the politics of service delivery.

In a recent Oxfam blog Duncan Green asks how aid agencies can promote local governance and accountability, looking at evidence and lessons from five countries.

David Roodman discusses the difficulty of finding out where the UN gets its money.

The CGD has released a new working paper looking at MDGs 2.0 and what goals, targets and timeframes should be set.

A recent Brookings blog post discusses how UNESCO research shows that our commitment to education in the developing world is stagnating and declining.