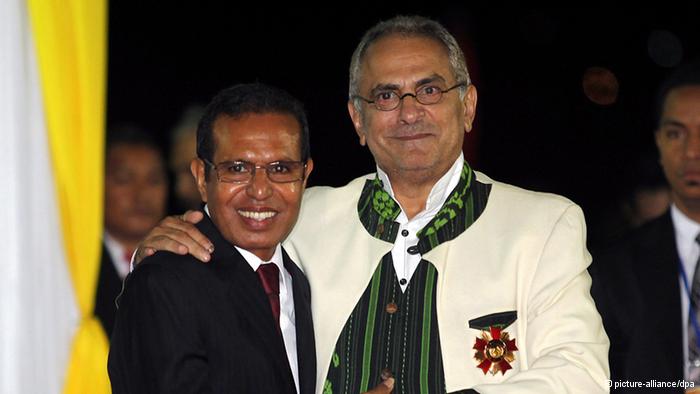 Former guerrilla leader and ex-army Chief Taur Matan Ruak was sworn in as the new President on Sunday, replacing Nobel Laureate and international figure for the independence movement Jose Ramos-Horta. The election, which the UN labelled “an important milestone for the consolidation of peace and stability”, marks an important landmark as the country celebrates its 10 years of independence. General elections will be held on July 7. James Batley from AusAID, and Australia’s first ambassador to Timor-Leste, is optimistic about the country’s prospects in this blog.

Global aid is set to fall even before inflation in 2012 according to Devpolicy’s latest Policy Brief (a blog summary is available here) by Kathryn Zealand and Stephen Howes who analyse 2012 aid budgets for major donors and find that 8 of the top 15 donors are planning on cutting aid this year. Further analysis is also available on the Devpolicy blog on the recent Australian budget (here), and on the collapse of the scale-up effort in Canada and the prospects for the scale-up continuing in the UK.

Afghanistan has dominated discussion at the recent NATO summit in Chicago, where NATO fully endorsed the Afghanistan withdrawal. At the summit Julia Gillard has committed to increasing Australia’s aid to Afghanistan by $85 million a year to $250 million by 2015 in an agreement signed with Afghanistan President Hamid Karzai, on top of the $300 million already committed for security forces. The US and Australia have used this increase to influence other coalition members to do the same.

The next President of the European Bank for Reconstruction and Development (EBRD): Suma Chakrabarti

The Board of Governors of the EBRD announced their pick on May 19th. Sir Suma Chakrabarti, currently the most senior civil servant in the British Ministry of Justice and former head of DFID, will start his four year term on July 3, 2012. The EBRD has invested more than €70 billion into Eastern Europe, and has taken on a new level of importance as the G20 last year ordered it to play the lead role in providing financial support to fledgling democracies in North Africa.

In the lead-up to his nomination, the first openly contested race in the Bank’s history, the CGD interviewed four of the five nominees. The selection defied expectations that Philippe de Fontaine Vive, the presumptive French Candidate, would take up the role and is the first time in the Bank’s history a Brit has taken the Presidency. The openly competitive process, the first of its kind in a multilateral, should place even further pressure for reforms in the next rounds of IMF and World Bank selection.

On April 12 the World Bank offices in Sydney hosted their latest Praxis Discussion. This time Michael Carnahan, the new Chief Economist at AusAID; Matt Morris, Deputy Director of Devolicy; and Truman Packard, Sector Coordinator for Human Development at the World Bank were brought together to address some of the big questions on aid effectiveness. See the hour-long discussion (with q&a) in its entirety below.

The World Bank released the first round of its Global Findex database, based on more than 150,000 interviews, that aims to ‘fill a gap in the data landscape’ to show how people in 148 countries save, borrow, make payments and manage risk. The data shows that three quarters of the World’s poor are ‘unbanked’. Some initial results on financial inclusion in Asia Pacific are summarised by the Bank here. An infographic outlining some of the major results is available here.

The World Bank has released its annual compilation of environmental data for more than 200 countries, known as the ‘Little Green Data Book 2012.’

The Annual Bank Conference on Development Economics (ABCDE) was held this month focusing on accountability and transparency for development, summarised here.

The World Bank has launched a new report ‘getting to inclusive green growth’, available here.

The ADB held its 45th Annual Meeting this month, which focused on inclusive growth. A summary of the outcomes are available here, here and here.

The 2011 Development Effectiveness Review (DEfR), ADB’s fifth annual performance report by Management, found that ADB made further progress toward its Strategy 2020 targets, and that reforms are succeeding.

A recent CGD report discusses how Cash on Delivery could help Tabacco Control in Developing Countries. Ian Anderson recently highlighted the issue in a blog post.

Reports that the number of people without clean drinking water may be as much as five times larger than the UN has stated highlight the vital importance of the WASH initiative blogged about recently here.

The Economist summarises a recent presentation by Esther Duflo on how an absence of optimism plays a large role in keeping people trapped in poverty.