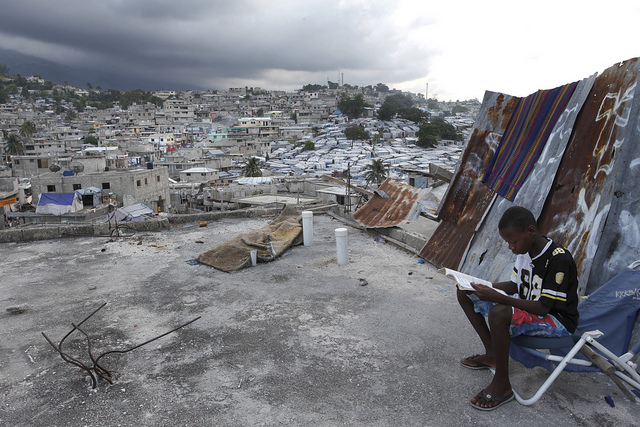 To what extent do the conditions into which you are born determine how long, and how well, you will live? This is the question which framed the launch of the latest update on the Global Burden of Disease (GBD) study last week. The report is entitled ‘Rethinking Development and Health’ and covers data through 2015.

For readers who may not be familiar with it, a quick primer: the GBD is one of the largest (if not the largest) compilations of global health morbidity and mortality data, spanning 1990 to 2015. It was established in the early 1990s in order to overcome the gaps and mismatches in existing health data, and to come up with a way of systematically examining the distribution and trends in disease, injuries, and risk factors worldwide. Importantly, it relies heavily on DALYs – disability-adjusted life years – in order to be able to compare the impact of various diseases and injuries in a way that takes into account both the early deaths as well as the suffering that they cause. The data collated encompasses 300 causes of disease and injury and 79 risk factors, compiled by 1,870 researchers in 127 countries and territories coordinated by the Institute for Health Metrics and Evaluation (IHME) in Seattle.

Given the volume of data, there are many findings from GBD 2015 that could be elaborated on. In this post I highlight a select few, the ones that seek to get to the heart of this question about the ways in which a country’s level of development affects the health of its people.

The first key finding is that some diseases and risk factors become less prevalent as countries become more developed, while other diseases and risk factors become more prevalent. As shown in Figure 1, communicable, maternal, neonatal and nutritional disorders are responsible for the majority of DALYs lost in poorer countries (what GBD refers to as ‘low SDI’ countries – more on that below), though the impacts of non-communicable diseases (NCDs) are significant. In wealthier countries, NCDs are the overwhelming cause of death and disability. Globally, the leading risk factors that need to be most urgently reduced are all causes of NCDs: obesity, high blood sugar, ambient air pollution, and drug use. 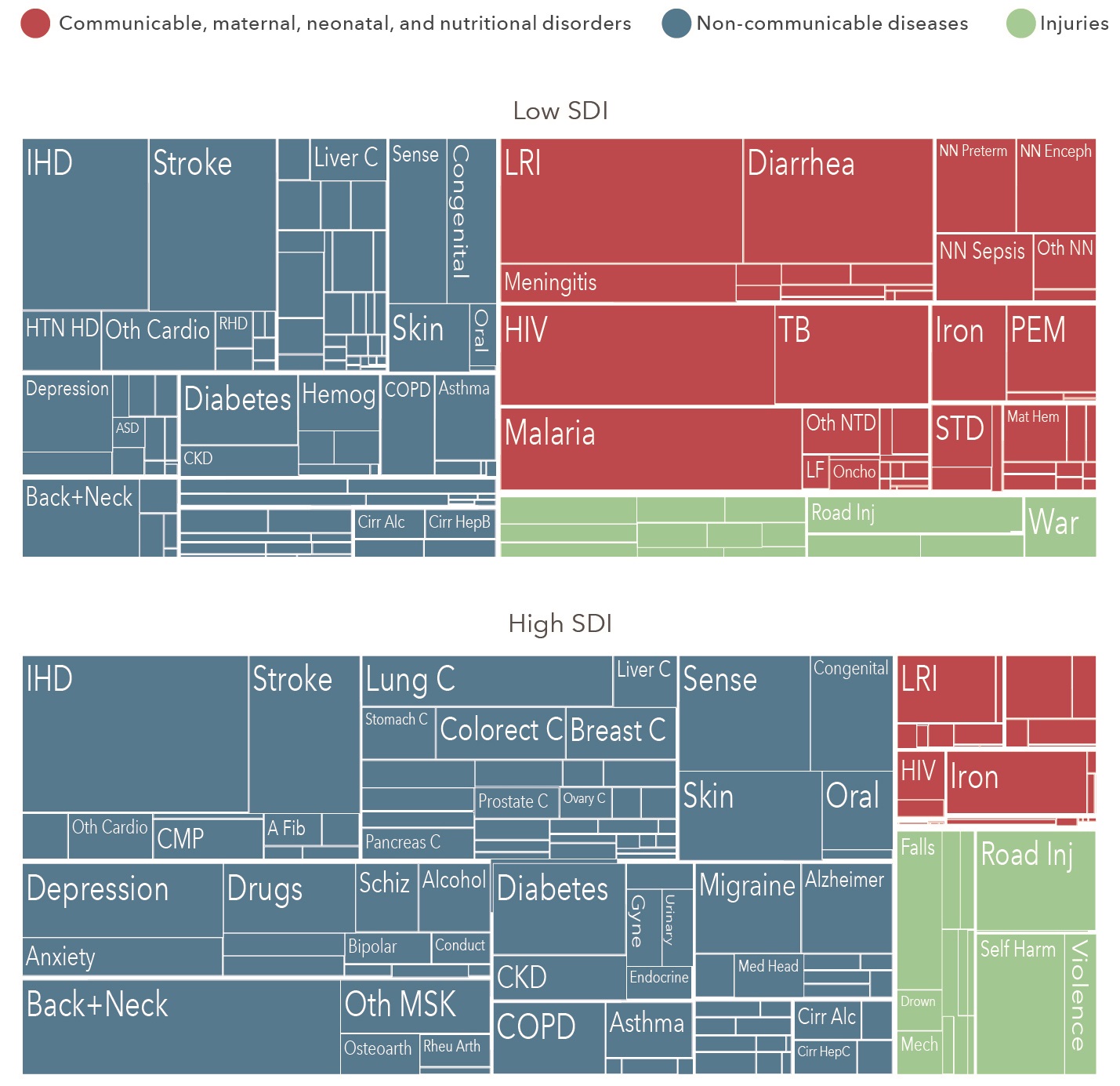 Second, while there is a general correlation between a country’s socioeconomic position and the health of its citizens, there are many outliers (Figure 2). Some outliers are negative: given their wealth, Russia and the US, for example, underperform on health outcomes. But some are positive: the health of people in Samoa, Ethiopia, China, and Australia, among other countries, is better than expected. Also under the category of positive outliers was the finding that global child mortality in 2015 was lower than expected given current levels of development. In broad terms, the GBD report attributes this achievement to the focus of donors and the broader international community on child survival and maternal health in recent years.

Figure 2: Ratio of age-standardized DALYs observed to those expected based on SDI level, 2015 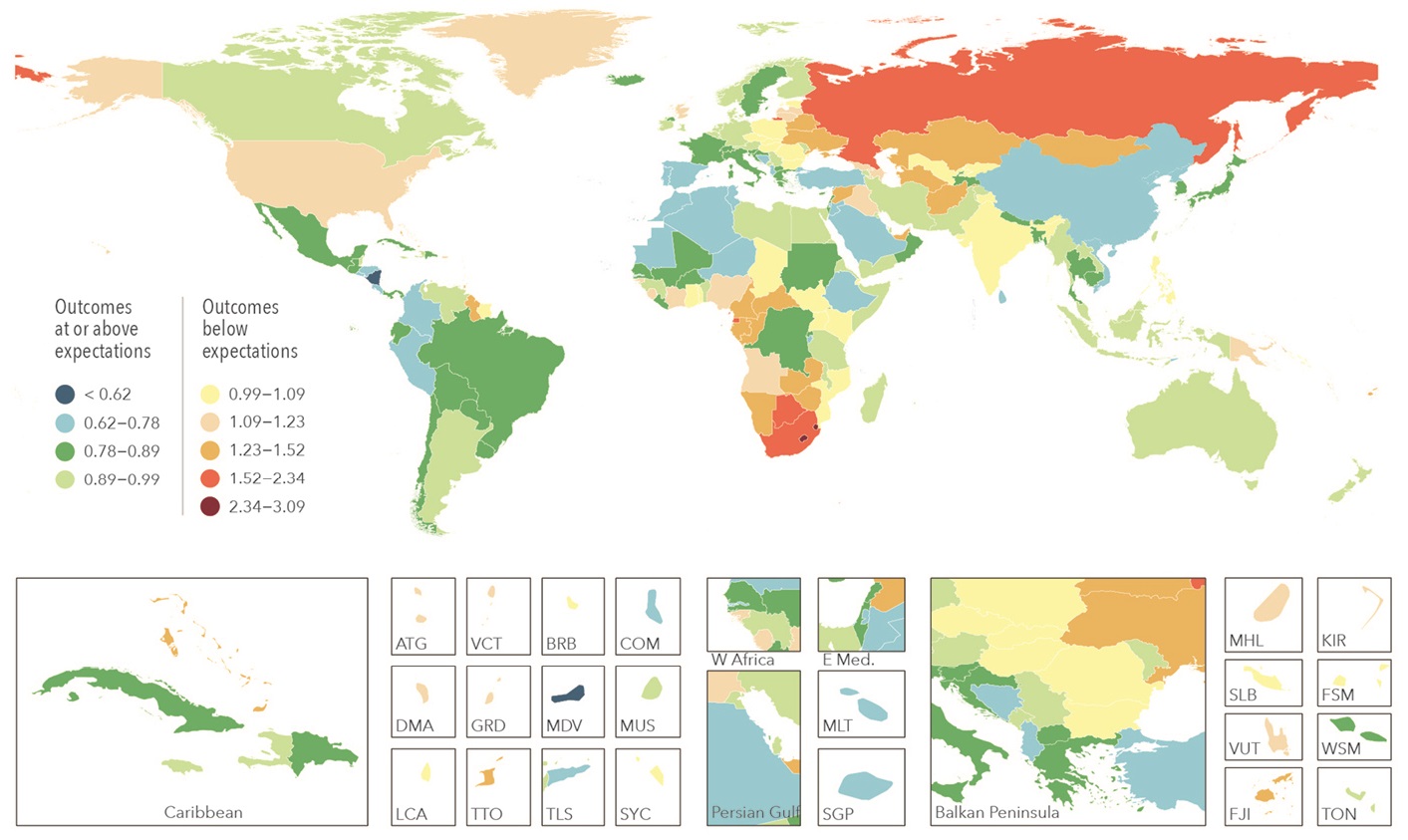 In addition to the findings, there are also a couple of notable methodological changes in the latest GBD – though both have a bit of a feeling of ‘one step forward, two steps back’ about them.

First, in what is fast becoming mainstream practice, this year’s GBD report no longer uses the terms ‘developed’ and ‘developing’ to describe countries. In light of the epidemiological transition, which is resulting in greater crossover between the kinds of diseases seen in so-called ‘developed’ and ‘developing’ countries, the GBD created a new index which incorporates key factors that affect health (income, education, and fertility), the Socio-demographic Index (SDI). Why the development of a new index was preferable to simply using an existing one – the Human Development Index would seem an obvious option – is not evident. And though the introduction explains that SDI is used in order to enable ranking of countries on a spectrum, as shown above results are frequently presented in the report grouped into quintiles or a ‘low SDI/high SDI’ binary.

The second methodological change is the calculation of 95% uncertainty intervals (AKA confidence intervals) for all results calculated by the GBD. As the introduction to the report notes, all of these results are estimates – and because health data remains inaccurate in much of the world, the uncertainty intervals are very wide for some data. Given that the report dedicates several paragraphs to explaining why uncertainty intervals are so important for the proper interpretation of statistics, it seems strange that the findings presented in the report do not include those intervals, “in order to enhance readability” (interested readers can retrieve these from the IHME website).

One further aspect of the GBD approach that is potentially problematic is its primary focus on country-level analysis. (Sub-national assessments – based on geographic regions such as states and provinces – are provided for only 11 middle- and high-income countries). Increasingly, researchers recognise that inequality within countries, not just between them, means that there can be huge sub-national differences in morbidity and mortality; what Peter Hotez refers to ‘blue marble health’, or the idea that the diseases of the poor exist, at times even thrive, in sub-populations within the world’s wealthiest countries. The national and geographical comparisons provided by the GBD are still valuable, but risk disguising how disease burden is inequitably distributed amongst sub-populations which may not be geographically clustered.

So: is development destiny? The answer is, predictably, both yes and no. Development makes some diseases and health conditions less prevalent, and others more prevalent; and while a country’s level of development clearly influences the health of its people, there are also plenty of countries that buck the trend. Though there’s nothing very surprising in these conclusions, it is nevertheless meaningful to have the data to back up hypotheses about how development affects health, and to trace trends over time. The next, and more important, task is to apply the GBD findings to improve the delivery of health services and to better target research.