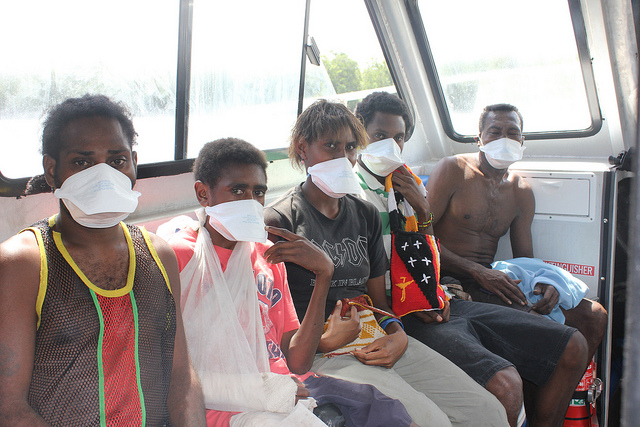 A recently published commentary in the Lancet Respiratory Medicine about the epidemic of multi-drug resistant tuberculosis (MDR-TB) on Daru Island off the coast of Papua New Guinea (PNG), followed by an open letter by the Treatment Action Group (TAG) addressed to The Global Fund, the World Health Organization, the Western Pacific Regional Green Light Committee (rGLC), and the United States Agency for International Development, were damning of the response to MDR-TB in PNG.

Contained within both publications are strong statements implying that the Government of Papua New Guinea and its local and international partners have failed to take action and respond to the “crisis”. The Lancet commentary states, “With little outside support, the men and women working in Daru have mustered heroic efforts to provide services to those living on the island…”. It is here that umbrage is taken.

That ‘little’ outside help includes a commitment of over AU$60 million by the Government of Australia [pdf] between 2011 and 2017 to address TB in PNG; AU$44.7 million of which has been targeted for South Fly District, where Daru Island is situated. This equates to more than AU$496 per person per year on Daru Island (population of 15,000 [pdf]) being spent on TB alone – in a country where the average overall per capita spending on health is just AU$118. As part of the Australian government funding, AU$10.8 million has been spent on international technical assistance and human resources in Western Province since 2011.

Domestically, a commitment of PGK 40 million (AU$16.5 m) was made by the Government of PNG in 2015 for funding both the national and the Daru-specific plan for MDR-TB. Whilst delayed, the national government released the first tranche of AU$3.3 million in January 2016. An accelerated plan of action with these funds has already been drafted by both the provincial and national government and their partners. Up until this point, national funding for TB was minimal, although increasing. National funding for TB increased to its highest level of funding in 2013, when the National Tuberculosis Program (NTP) secured PGK 2.1 million directly. PGK 9m (AU$3.71m) was also allocated to TB drugs under the medical supplies budget and PGK 4m (AU$1.65m) in a grant to World Vision.

‘Little outside support’ is, therefore, a serious misnomer. Whether those funds are being channelled into the most appropriate responses requires a separate discussion.

Concern is also raised about the statement in the Lancet that “several nursing staff have lost their lives to MDR-TB”: it is sensationalism at best. A quick fact check via the provided reference states that several nursing staff had contracted MDR-TB, but there is no mention of where it was acquired, or of them losing their lives. They were all reported to be on treatment. Whilst the risk of acquiring MDR-TB by a health care worker is a very serious issue, ill-informed editorial statements without knowledge of whether the TB was community-acquired or acquired in the workers’ line of duty can have serious consequences for health care workers and patients alike. Statements like this contribute to an already heightened sense of fear in a place where it is difficult to recruit and retain qualified health care workers, and to get patients to access health care services.

Another day, another health crisis: why emergency responses are not the answer

These factual issues aside, there are deeper problems with the ‘emergency’ tone taken by the Lancet and the TAG authors.

From October 2010 to March 2011 a cholera outbreak rampaged across Daru Island, and the South and Middle Fly Districts of Western Province. Nearly 4,000 cases were reported (many more are suspected to have not been reported due to lack of access to a health facility) and Western Province had the highest recorded case fatality rate (8.8%) of the epidemic. More than 330 people from Western Province lost their lives due to cholera. Emergency response systems were put in place, the crisis was responded to, and health system issues were highlighted in multiple presentations to the ‘Emergency Taskforce’, but what of those responses remained once the outbreak surge team retreated? The current situation feels very much like deja vu.

The problem with emergency responses in these situations is that they typically last only as long as the emergency. Whilst the MDR-TB epidemic on Daru Island and other hotspots, such as the National Capital District and Gulf Province, will be a critical situation for quite some time, there is (contrary to the published reports) significant international and national support now working collectively to stem the outbreak. Eventually, once traction is made and the risk subsides, the emergency status will be revoked – a prolonged emergency is not a favourable political state on either side of the Torres Strait – and Programmatic Management of Drug-Resistant TB will be integrated into standard practice. When this happens and the additional emergency financial support also dissipates, will the international fly-in fly-out technical assistance team remain to build capacity in other clinical areas? Who will answer doctors’ calls for support when there are stock outs of other drugs once the ‘hotline’ for MDR-TB treatment to Port Moresby is no longer answered by a bilateral donor? Will the additional community health workers remain once funding for outreach dries up from donors, and health funding returns to being just the available government budget, determined at the discretion and whim of Members of Parliament, provincial governors and administrators?

In addressing MDR-TB in PNG there needs to be smart advocacy and smart investments. This includes considering the most ethical and sustainable ways to increase access to the most efficacious treatments, whilst ensuring the health system can support the scale-up. It is not just a case of procuring more GeneXpert machines to reach universal coverage, as the TAG letter implies, or rolling out new drugs and regimens, such as bedaquiline (see WHO Guidelines on use here and here). The latest technology and treatment regimens, although important, are not the panacea for the struggling health system in PNG or the MDR-TB crisis. Without consideration of the system-wide implications of these new tools and new drugs, it is likely that they will end up compounding the system failures, as opposed to addressing them. Making smart investments in health demands that contemporary decisions do not create institutional or other legacies, which will impede future opportunities for longer term, sustainable change in PNG. Creating a strong health care system in PNG requires a combination of both short and long term investments that are cognizant of past history and informed by evidence, including socio-anthropological research.

The rates of MDR-TB in Daru are extremely concerning, there is no argument there. But is MDR-TB any more of a cause for concern than the extreme rates of gender-based violence in PNG, where more than 67% of women are reported to have been beaten by their male partners? Or maternal mortality, which is estimated to kill nearly 15 times  more women per year than the total estimated number of people dying from TB [pdf]?

While perhaps well-meaning, neither the Lancet article nor the TAG letter demonstrate an understanding of the complexity of health service delivery in PNG. A range of informal factors significantly influence the health system context, including the effectiveness of governance, the distribution of resources, and crisis response. There is an overwhelming assumption that actors within the health system in PNG have the power to implement a response that accords with the expectations of those not familiar with the national socio-political climate. In a country where public resources are increasingly controlled by politics and politicians [pdf], as opposed to public policy and properly planned budgets, conventional governance mechanisms and norms (as they exist in Western democratic ideals) have little influence, particularly in a context where political actions are used to increase the visibility of individuals and their performance relative to locally informed social values.

Accountability is key to driving any long term and lasting change in both the response to MDR-TB and strengthening the PNG health system. There is a need for greater community engagement, and this is where there is consensus with TAG’s requested actions in supporting a PNG community representative to join the rGLC. But the greater need is to support whole communities in PNG to become more knowledgeable and outspoken about their rights to health and quality health care, and their rights to be protected from TB. Doing so requires recognising that in driving accountability at the local level, values must play a central role. If there is value placed on health and other social services, then the powerful individuals or ‘big men’ within the public institutions, especially at the district and provincial level, are more likely to prioritise investments in those areas.

Activism is critical. Activism has been responsible for some of the biggest gains in terms of a person’s rights to and equity in accessing health care across the world. But sensationalism and distorted truths do nothing but foster fear mongering and finger pointing. The time and energy lost both at country and international levels in responding to these articles has meant that less time and energy has been spent on solving problems and implementing the solutions to ensure that the MDR-TB crisis is controlled, and PNG’s health system is developed to be a resilient and responsive one that meets the needs of its people.

Anna Maalsen is a consultant on international public health and health systems, based in Port Moresby.

Author’s note: I cannot write this commentary without declaring potential bias in my view point. PNG is a country in which I have worked in public health for nearly 10 years. I had up until 2014 provided some support to the National TB Program in my wider capacity as the Public Health Management Adviser to the National Department of Health, and had extensive involvement in the development and implementation of The Global Fund grants, across all three diseases. I can declare that I do not have any competing interests in this matter now.

Anna Maalsen is a consultant on international public health and health systems, based in Port Moresby.