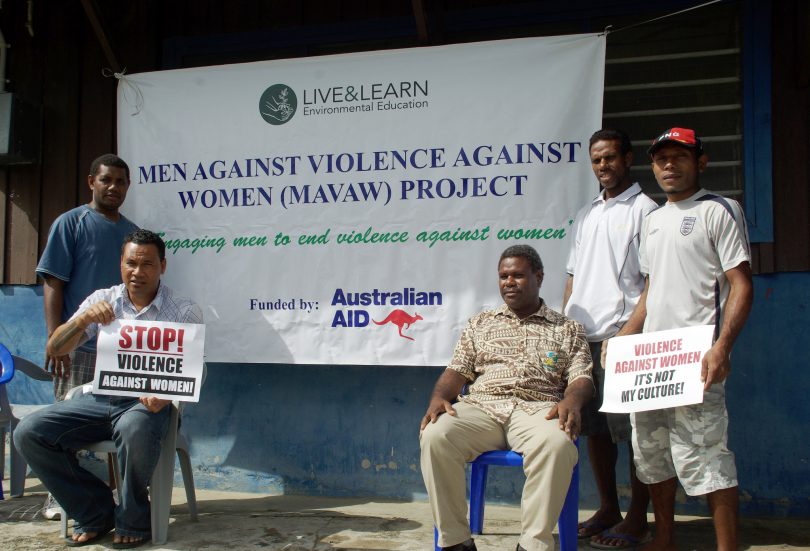 Staff from the Men Against Violence Against Women project in Solomon Islands (Irene Scott/DFAT/Flickr/CC BY 2.0)

It is often assumed that women are empowered when they are able to earn an income and that this puts them in a stronger position to negotiate with their partners. However, this is not always correct. Neither is the view that earning an income reduces men’s violence against their wives. In fact, those trying to promote gender equality through economic empowerment initiatives face the vexing issue that their efforts may have unintended negative consequences, improving one dimension of women’s lives but undermining others.

The ‘Do no harm’ (DNH) research, carried out between 2014 and 2018, addressed the question of how to improve women’s economic agency and the security of their livelihoods without compromising their safety. To grasp the actualities women face in trying to improve their economic situation, the research gathered detailed verbal accounts from women about their work and home lives. Field research in Solomon Islands and Papua New Guinea produced 485 interviews – 238 with women and 135 in-depth interviews with well-informed local leaders, both female and male.

The women who participated in this study valued the opportunity to earn an income and spoke positively about its benefits. But, as they told us, income generation also has negative impacts, including the burden of extra work, difficulties finding childcare, problems accessing markets, and increased demand from husbands and relatives for money. Overall, we found that partners rarely agree about household expenditure and that womens’ income generation often contributes to marital conflict and violence.

Much of the conflict and violence associated with money concerns men demanding or seizing money from their wives. Some conflicts occur because the husband expects full control of all the income that his spouse generates, even when he has not contributed to earning it. Other conflicts about money occur over spending priorities for pooled income, wives usually prioritising family needs and men prioritising their own desires. Some husbands require their wife to ask his permission for any expenditure of pooled income, but do not seek agreement for their own expenditure. If a wife challenges this demand, conflict is likely to follow. Also, some men become angry if their wife is unable to complete domestic tasks as expected. Men rarely assist their wives with household work, such as cleaning, cooking, subsistence gardening and child care, even when the wife is working hard to earn income for the household.

The research also showed that many men often reduce their own contributions to the household, or to contribute nothing at all, if their wife begins to earn an income. At all field sites, women often bear total responsibility for the financial support of the household, even when their spouse has an income. Instead of increasing the pool of resources available to the household, women’s economic gains often result in men using all their own earnings for their own discretionary expenditure. The impact of men’s resource-depleting behaviour on women’s workload and household well-being is a source of discontent and often results in domestic conflict. Conflict often occurs when women exercise agency by refusing requests for money or by questioning their husband’s wasteful expenditure.

Many women reported that their partner’s alcohol consumption — particularly in the form of binge drinking — was central to marital discord. They consistently reported that refusing requests for money for alcohol or questioning expenditure on alcohol was a trigger for violence. Men resented being reproached by their wives for wasting money on themselves and depriving the family, and this was a frequent cause of men’s violence towards their partners.

The importance of making the potential for violence integral to the design of women’s economic empowerment interventions has been highlighted in recent international literature. A recent DFID Guidance Note argues that programs to improve women’s business performance or increase women’s income are threatened or diluted by the impact of violence. To defuse the risk and to optimise benefits of economic development, the authors stress that it is essential for such programs to address violence against women.

The DNH research provides insights into the gendered power dynamics at play in marital relationships, the specific factors that hamper women’s income-generating activities and the risk factors for violence in the Solomon Islands and Papua New Guinea. Given the importance placed on women’s economic empowerment by donors, NGOs and governments, there is a critical need to recognise that women’s economic empowerment sometimes entails risks for women that development programming must counteract, something which is canvassed in the three detailed reports from the research (on PNG – including on Bougainville –  and on the Solomon Islands).

The research was a collaboration between the Australian National University’s Department of Pacific Affairs (formerly State, Society and Governance in Melanesia Program) and the International Women’s Development Agency (IWDA) and funded by the Australian Government through the Department of Foreign Affairs and Trade’s Pacific Women Shaping Pacific Development program. The research is also summaried in these two DPA in briefs.

Richard Eves is an Associate Professor at the ANU Department of Pacific Affairs.