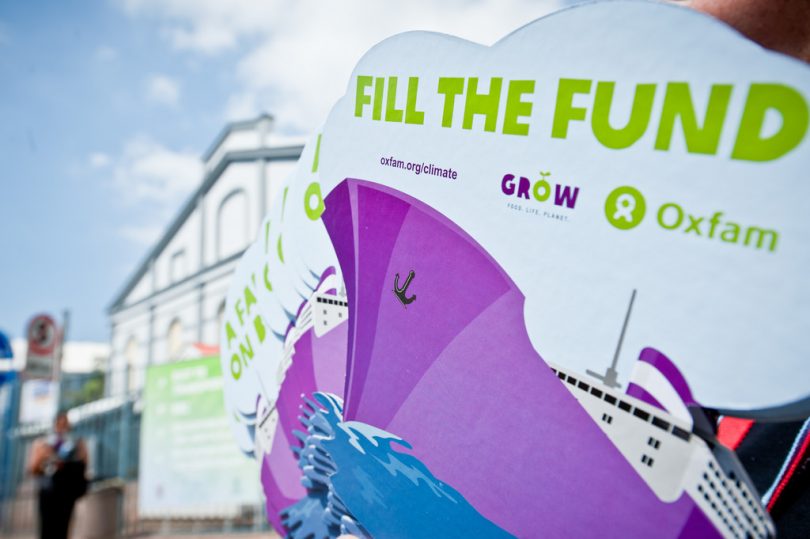 A fair deal on bunkers at COP17 (Oxfam International/Flickr/CC BY-NC-ND 2.0)

The recent announcement of the signing of an MOU between the European Bank for Reconstruction and Development (EBRD) and the International Maritime Organisation (IMO) gives hope that there may be some progress in resolving a long standing problem with international finance to deal with climate change.

As a member of the Secretary-General’s High-Level Advisory Group on Climate Change Financing, it quickly became clear that the problem of shipping emissions was one that nobody wanted to address.

The Advisory Group report ultimately concluded that the international maritime sector could raise $2-$19 billion by 2020 towards the $100 billion it was agreed in Copenhagen would be provided by developed countries to assist developing countries meet the mitigation and adaptation costs of climate change.

This wide variation is based on the range of possible carbon prices which could be applied to bunker fuels.

The medium-range options were $4-$9 billion. This calculation was based on approximately 1 Gt of emissions priced at $25/t of carbon and subtracting developing country incidence and estimating that of the remainder, 25-50% could be used for international climate finance.

The report passed responsibility for taking action to the IMO. This was really passing the buck, because it was clear at that time that there was no will within the IMO to confront the issue. It is a very difficult issue. There are jurisdictional issues, problems of incidence, and equity considerations.

Things have moved on a little. There is already the GloMEEP (Global Maritime Energy Efficiency Partnerships) initiative aimed at supporting the uptake and implementation of energy efficiency measures for shipping. This project is mainly advisory in nature but may also assist in the mobilisation of private finance for initiatives. It is a joint initiative by the Global Environment Facility (GEF), United Nations Development Programme (UNDP) and IMO.

Neither this nor the proposed EBRD/IMO collaboration will solve the fundamental problem of the untaxed nature of bunker fuels for international shipping.

But they could well contribute to a decline in carbon emissions from international shipping.

My advice is that the EBRD sees the MOU with the IMO as a starting point for approaching the public and private sectors jointly to bring incremental change and sustainable investment in the maritime sector.

This comes at a time when the IMO is facing demands for shipping to radically reduce its CO2 emissions.

The BBC has reported that if shipping doesn’t clean up its act, it could contribute almost a fifth of global CO2 by 2050.

The UK, supported by other European nations, will use a forthcoming IMO meeting to press for a 70-100% reduction in shipping emissions by 2050.

This is relatively easy for a country with virtually no shipping industry and an emphasis on services exports and financial services. It is more difficult for others, including Australia. There has so far been no indication of the attitude that Australia will take at the meeting this week.

Since this blog post was written, the IMO Environment Committee has agreed upon a significant program to reduce carbon emissions. The United States, Saudi Arabia and Panama are reported to have expressed reservations. Other reports suggest that Canada, Argentina, Russia, India, Brazil, Iran, and the Philippines have raised concerns about some aspects of the agreement. There has been no reference to the Australian Government’s position.