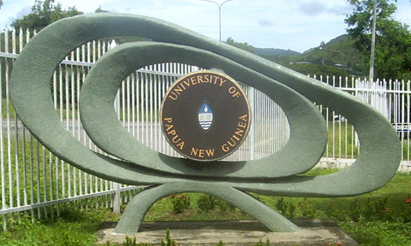 I am currently a lecturer in economics at the University of Papua New Guinea, paid for by the Australian aid program.

My role is not only to teach, but to develop the relationship between the University’s School of Business Administration and the Australian National University’s Crawford School of Public Policy – a partnership to improve the teaching of economics in Papua New Guinea – and to collaborate on research. It is also my role to aid the UPNG Economics Division in any way I can to meet the many and various challenges that we together face.

And there are many challenges. Until recently, the permanent staff of the Economics Division was down to one lecturing, full-time tutor who heroically held the discipline together with the sheer grit and quiet acquiescence to reality that is so common in the country. Now we are up to five full-time staff – myself, an Australian volunteer, a senior lecturer from India, and two Papua New Guinean lecturers.

The durable concrete-block buildings that John Langmore wrote of are still there, if a bit blackened and stained by tropical damp. By Western standards, the facilities are poor and very run-down. Power outages are also a haphazard if common occurrence – just the other day, instead of lecturing in the dark, the class and I moved out to the Haus Win (an open-air pergola) where the students clustered closely on concrete benches just to hear me speak on the challenges in international trade that face Papua New Guinea. Most of the textbooks in the library are from the 1960s to the 1990s, partly because the more modern textbooks are not often returned, and partly through a fear that any new purchases will simply meet a similar fate. The internet connection is better than it was, but still slow and sporadic.

Reading this list, it might seem that there is little hope, but that is completely the wrong conclusion. The opposite is true, because the students are as keen as mustard; willing and hungry to learn. Their educational backgrounds are obviously not as strong as those enjoyed by their Australian counterparts, and they have to negotiate all the usual challenges of students in poor, developing countries. While some are from middle class Port Moresby families, few – if any – are rich by developed-country standards, and many struggle to pay their fees and living expenses. Most of those who have made it this far are both bright and engaged.

The students also have a strong sense of national spirit. The great majority of my students want to work for the national government or provincial-level governments when they graduate so that they can serve their people.

While there is a long way to go, the economics faculty and the School of Business Administration, within which economics sits, are on a reform path. With more teachers, the economics division is less reliant on casual teachers. We are improving access to textbooks, and we are recommencing research and outreach, including through the now-revived PNG Update.

I am greatly thankful for the opportunity to work at the University of Papua New Guinea to improve the state of economics, and to contribute to the knowledge of the country’s future economists. It is an honour and a pleasure, and I only hope that I can live up to the task.

This is the second of a two-part series on UPNG economics, then and now.

Michael Cornish is a Visiting Fellow at the Development Policy Centre, Lecturer in Economics at the University of Papua New Guinea, and Coordinator of the ANU Crawford-UPNG SBA partnership.

Michael Cornish is currently working as the Senior Policy Adviser to the Member for the Australian Federal electorate of Mayo, Ms Rebekha Sharkie. Previously he was a Visiting Fellow at the Development Policy Centre, Lecturer in Economics at the University of Papua New Guinea, and Coordinator of the ANU Crawford-UPNG SBA partnership.