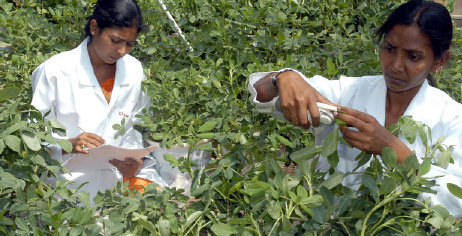 With the human population now at 7 billion and rising, agriculture and agricultural R&D has never been more important.

I’ve been privileged to be associated with international agricultural R&D in Sub-Saharan Africa and Southeast Asia for the past 20 years.  While the need for agricultural production to keep pace with human population growth and increasing urbanisation is pressing, it is a process that does not cope well when rushed.  The key components of successful programs can be brought down to four P’s:

Taking these components one by one …

It’s critical that the team of people involved in the R&D have interests that intersect and contribute to the overall goal of the program.

It’s currently fashionable to speak of multi-disciplinary and transdisciplinary approaches and, in the case of agricultural R&D, it is essential.  Ecologically sustainable agriculture is built on healthy systems.  These include agricultural, ecological, cultural, and administrative systems which all need to function efficiently and effectively.  Consequently, the composition of an R&D team should reflect this complexity by including value chain specialists, ecologists, anthropologists and gender specialists in addition to those more commonly recognised as traditional agricultural professionals (including farmers themselves).

Gender is regularly included in programs as a cross cutting issue, but it rarely receives in depth attention.  Most agricultural programs focus on increasing yields or animal production and in most cases these ‘cash crop’ programs are considered ‘men’s business’.  The burden that some countries are facing in relation to persistent malnutrition in significant portions of their populations alongside increasing numbers of obese citizens suggests cause for pause.  Women’s agricultural work often coincides with the crops and animal products that are consumed at the household level using varieties and breeds that are considered ‘low output’.  However, in terms of overall nutritional value and impact on the environment, these ‘low output’ farming systems often perform extremely well.

Achieving effective communication, dialogue and participation is always easier said than done.  Often the need to produce results within increasingly short project cycles mean that agricultural R&D programs have to move forward at a pace that does not always allow for the effective participation of stakeholders.  To achieve significant impacts with sustainable adoption pathways, it is crucial that all key national (i.e. government and private sector agricultural services, in addition to national agricultural research organisations) and regional stakeholders (i.e. regional economic communities, in addition to multilateral agencies) are closely associated with the development and implementation of the project.  The ability of research findings to contribute to positive impacts is facilitated by undertaking the research within the regulatory and administrative environment in which the findings are to be applied.

Agricultural R&D is a complex process and we learn together as we go along.  Truly significant contributions have frequently been made because the work of a committed team, which involved long term partnerships, was able to flow over ten to 20 years.  We really do need time to learn together and to share failures as well as successes.

The saying “Rome wasn’t built in a day” is definitely applicable to agricultural R&D.  Those who have grown up with agriculture understand the long term nature of the activity and the complexity of the systems involved.  Solving real life problems, which all stakeholders agree is a priority, usually takes more than two or three years.

Some of you may be worrying that this post is coming to an end and I’ve not mentioned funding for R&D.  Of course we can’t do good R&D without resources and it’s critically important for donors, government and the private sector to invest in sound, long term agricultural R&D.  However, in my experience, the R&D programs that have led to sustainable and positive changes have frequently been those with relatively low to moderate budgets.  Having to think about the best use of funds and identifying co-funding opportunities within existing frameworks is more likely to result in an output that is adapted to the financial and administrative system(s) in which it must continue to operate.

Dr Robyn Alders is an Associate Professor in the Faculty of Veterinary Science at the University of Sydney. For more from Robyn take a look at the seminar she delivered at Devpolicy this year here (video here).

Dr Robyn Alders is an Honorary Professor at the Development Policy Centre. She is also a Senior Consulting Fellow at the Centre on Global Health Security at Chatham House and Chair of the Kyeema Foundation.