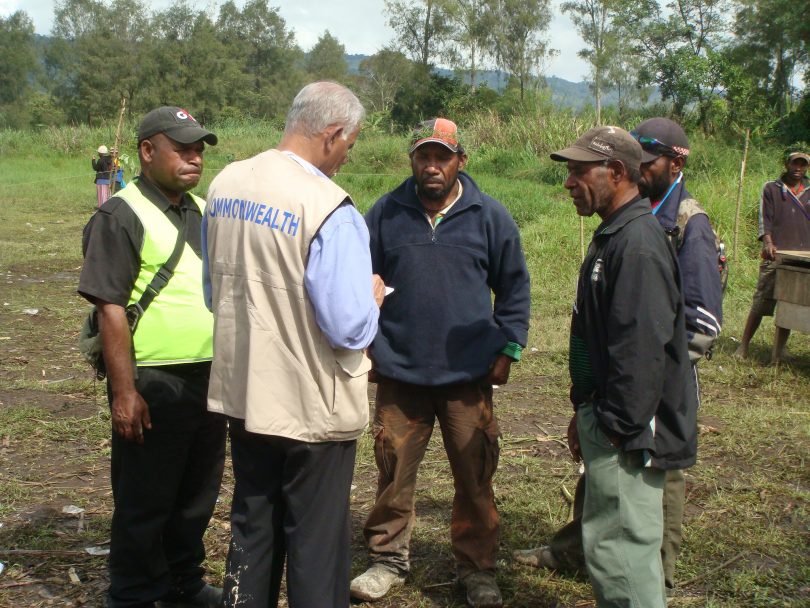 Papua New Guinea (PNG) is about to go to the polls. From 24 June 2017, voters will line up to choose MPs for 89 ‘Open’ and 22 Provincial electorates. If past elections are anything to go by, containing corruption will be a significant challenge. In the 2012 election there were widespread reports of bribery and fraud involving candidates, citizens and electoral officials. Electoral observers also found that bribery, fraud and ‘money politics’ were spreading from the highlands to the coastal regions. This is deeply concerning as corruption distorts and undermines democracy.

There has been some progress around electoral corruption since the last national election. In October 2013, PNG’s Supreme Court found that all forms of exchange of goods and money by candidates during the election period amounts to illegal bribery. The ruling suggested such activities should occur prior to the election period. This latest case, titled Aihi v Isoaimo (2013) PGSC 56; SC1276, is now the law. This stricter approach is beneficial, as it is designed to discourage candidates from participating in expensive customary obligations, and to mitigate voters being influenced by money politics.

This ruling augments existing laws that outlaw electoral corruption. Section 103 of PNG’s Criminal Code Act (CCA) criminalizes attempts to provide benefits to electors, soliciting benefits in return for votes, or receiving benefits to influence the outcome of elections. Although election bribery should be a very serious offence, the law categorizes it as a misdemeanor: it is punished by a fine not exceeding 400 kina (A$164) or imprisonment for no more than one year. Given the millions of kina spent on elections this is not a significant deterrent.

A potentially more potent law is Section 215 of the PNG Organic Law on National and Local Government Elections (OLNLGE). It vests in the National Court of PNG the authority to declare an election void if it finds that the candidate had committed or had attempted to commit bribery or undue influence to get elected. Such a finding by the court does not bar or prejudice a prosecution for bribery under the CCA.

Despite these legal instruments there is little to suggest corruption will be significantly contained in 2017. For a start the Electoral Commission is suffering from a lack of funds, as are the police. The ratio of citizens-to-police has significantly worsened– it is nearly four times worse now than during PNG’s independence in 1975. Sitting MPs have distributed their growing constituency funds over the past five years, which have been used to strengthen patronage among past and potential supporters. In many places, this is likely to increase expectations of largesse distributed during the election campaign.

More importantly, there are few indications of significant shifts in the complex socio-cultural factors that drive corruption during elections. Research has found that citizens, particularly women, feel obliged to vote for local ‘big men’. A candidate who is insensitive to or out of touch with the people and their custom can be regarded as “whiteman gat blackman skin”, meaning a Papua New Guinean who does not know how to connect to their people and their custom. Citizens also justify selling their vote due to material concerns, such as poverty and lack of state services.

Recently people have been getting around the Supreme Court’s ruling banning ‘money politics’ during campaigns by extending mourning periods (haus krai) for deaths, and scheduling compensation payments, bride prices, feasts and other festivities through the election period. Despite the ban, one of us (Sam) has observed political events that have continued through the official electoral campaign period.

Given these factors it is unlikely that, in and of itself, a change of law will significantly reshape electoral practices – even though this is a step in the right direction.

Due to the inability of the PNG state to enforce its laws, many are rightly worried that this year’s election will see a rise in vote-buying, electoral engineering and other forms of corruption. In private, some observers predict anarchy. For the doomsayers it’s worth remembering that PNG is one of the few developing countries that have not succumbed to military rule since independence. Democracy has been severely challenged but the country has not descended into dictatorship (no matter what some social media warriors suggest).

It is also worth remembering that these are long-running issues. For example, the tension between rule of law and socio-cultural factors can be traced back to PNG’s independence (and into the colonial period). PNG’s Constitution recognizes the importance of customary practices as long as they are not inconsistent with a Constitutional Law or a statute, or contravene human rights. This is reflected in past Supreme Court rulings. In the election petition case of Peter Wararu Waranaka v. Gabriel Dusava PGSC 11; SC980 (2009) – a dispute over the outcome of the 2007 national election in Yangoru-Saussia Open – the Supreme Court took a liberal view, noting that:

the political campaigning period is…marked with a lot of festivities and activities. It is a time when a lot of customary obligations are met and often times money and other goods exchange hands. Most of these are to strengthen existing relationships in some cases and in others, creating and entering into new ones. In these settings, leaders are often expected to take the lead, throw up parties and help meet or reimburse expenses incurred by their people or supporters. Care must therefore be exercised to ensure that genuine gifts and meetings of customary obligations with words spoken are considered in their proper context to avoid any misunderstandings and taking matters out of context.

While this ruling has been superseded by the stricter 2013 Supreme Court judgment we discussed earlier, it highlights how important tradition and culture are not only for PNG’s citizens, but also for its lawmakers during elections.

It is hoped that the courts and law enforcement will draw on PNG’s improved laws to go after candidates who engage in electoral corruption. However, without responding to the deeper political, economic and socio-cultural factors driving corruption, it is likely that they will only be addressing the symptoms, not the causes of the problem.

Sam Koim is a Visiting Fellow and Grant Walton is a Research Fellow at the Development Policy Centre.